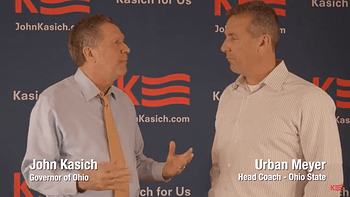 In the interests of full disclosure, I must report that I am a huge Ohio State fan. I've been living and dying with Buckeye football since OSU beat USC and O.J. Simpson (yes, that O.J. Simpson) in the 1969 Rose Bowl. But I couldn't' help but greet today's news that Coach Urban Meyer officially endorsed Governor John Kasich for President with a response Buckeyes fans will understand:

This discomfort has little to do with the person Meyer endorsed and everything to do with the fact that the highest paid public employee in Ohio ($5.86 million in 2015) put his weight behind the current governor of the state. (For more background, see Dave Zirin and David Sirota.) His move can't help but appropriate the halo that surrounds the most beloved institution in the state and put his student-athletes in an uncomfortable position.
That's why Meyer was right to steer clear of praise from Donald Trump just days ago. Asked about Trump's statement in Columbus ("I don't know if he endorses me or not, but he's said awful nice things about me"), Coach Meyer announced:

"I have strong beliefs, but I'm not going to share that with you guys. I don't think that's appropriate."

But that was then and this is now. And now, the Ohio primary is just days away. On Thursday, Meyer appeared in a video with Kasich to proclaim, "Go win this darn thing."

Meyer tells Kasich he "did some research about all the great work, the great leadership you've shown for our great state. We're very proud of you and Karen (Kasich's wife) and your family and look forward to this."
The men then talk about "raising the bar" in both politics and football, with Kasich invoking the name of legendary OSU coach Woody Hayes. "I don't want to let people down and I'm sure you feel the same way," Meyer says.
Calling Kasich a friend, Meyer says that he is a "true supporter of what you stand for.
"Now that I know what you really stand for, we'd like to tell you we wish you guys the best," Meyer concludes as he exchanges a handshake with the governor.

Now, by all indications the two men are friends. (With one named after a pope and the other having contemplated the priesthood, their conversations must be fascinating.) But for the faithful in Ohio, Buckeyes' football is a religion of its own. Meyer has put that tradition (and his own staggering 85 percent approval rating) in the service of the state's boss.
Keep in mind, too, that in four months Cleveland will be hosting the 2016 Republican National Convention. The city will deploy thousands of police, many of whom will be wearing some of the 2,000 new riot control gear purchased with a $50 million federal security grant. And this will all be taking place in the shadow of the police killing of 12 year-old Tamir Rice, a travesty which has left tensions elevated, especially in east Cleveland. That area also happens to be a pipeline of football talent to Ohio States, where in recent years Glenville High School alone has sent Ted Ginn, national championship quarterback Cardale Jones and Heisman Trophy winner Troy Smith to stardom in Columbus. For his part, Governor Kasich has offered anodyne statements calling for calm in the aftermath of a grand jury decision not to prosecute the officers involved in Rice's killing. But GOP primary leaders Donald Trump and Ted Cruz have blasted the Black Lives Matter movement, declaring "we have to give power back to the police, because crime is rampant" and BLM is "literally suggesting and embracing and celebrating the murder of police officers." That kind of incendiary rhetoric certainly won't help as Cleveland heats up in July.
But that's what Urban Meyer has signed up The Ohio State University for with his endorsement today. And he's not alone. Disgraced former Ohio State coach and current Youngstown State University President Jim Tressel has jumped on board the Kasich bandwagon, too, and will appear at two events with the Ohio Governor.
But this isn't about John Kasich. Meyer and Tressel could have endorsed Bernie Sanders, Hillary Clinton or Donald Trump and still found themselves in the same ethical quandary. For these storied employees of the taxpayers of Ohio, political endorsements can leave a mark that's difficult to wash off. Just like tattoos.