Hillary Clinton 38, Donald Trump 0. If you haven't been keeping score, that's how many years of tax returns Hillary Clinton and Donald Trump respectively have made available to the American public.
But Trump's declaration that "it's none of your business" what tax rate he pays isn't the only sign that the Donald is only posing as a populist. While Hillary Clinton has proposed raising her own taxes, Donald Trump would save millions of dollars under his own plan.
Unveiling his on-again, off-again tax plan in September, Trump bragged:

"It reduces or eliminates most of the deductions and loopholes available to special interests and to the very rich. In other words, it's going to cost me a fortune -- which is actually true -- while preserving charitable giving and mortgage interest deductions, very importantly." [Emphasis mine.]

Unsurprisingly, Trump is almost surely lying. His last financial disclosure placed his annual income at $250 million. On October 4, he told ABC News that he made $605 million over the previous year. As Len Burman, director of the Tax Policy Center put it in December:

Donald Trump hasn't released his tax returns, but people in his income group would get huge tax cuts. 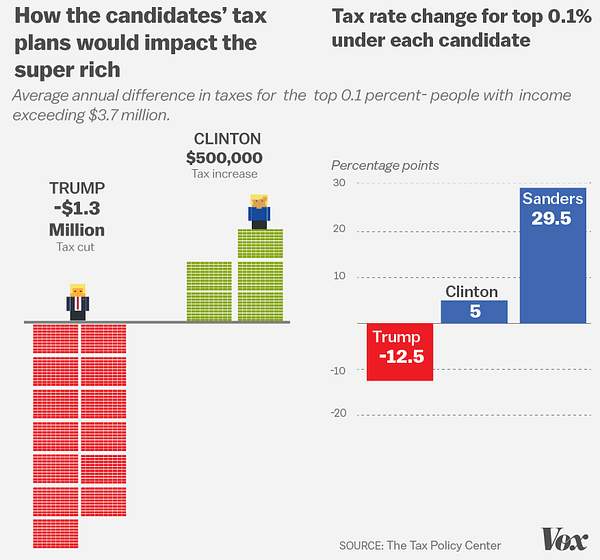 That's exactly right. Ending the carried interest exemption, as Trump, Clinton and Sanders have all proposed, will hit hedge fund managers and private equity titans like Mitt Romney, but not real estate tycoons. But the Donald's call to reduce the top marginal income tax rate from 39.6 to 25 percent could mean millions more for his coffers each year. His new 15 percent tax rate for business owners and corporations, down from the current percent corporate statutory rate of 35 percent, could benefit Trump as well. (A similar business owners' pass-through tax in Kansas cost the state hundreds of millions in lost revenue.) On top of that, the elimination of the estate tax paid by less than a quarter of one percent of all fortunes, would redirect billions of Trump's supposed $10 billion wealth from the United States Treasury to his heirs. As Washington Post fact checker Glenn Kessler explained in his Four Pinocchio review of Trump's claim that his tax plan "is going to cost me a fortune":

No matter how we slice it, we do not see how Trump can justify his claim that his tax plan would cost him "a fortune." On the contrary, it appears it would significantly reduce his taxes -- and the taxes of his heirs.

If Trump is to be believed, his annual income puts him among the top 400 taxpayers in the country. And as the Tax Policy Center found, The Donald's plan on average hands the top 0.1 percent of earners a $1.3 million annual tax cut.
Of course, that won't happen if Hillary Clinton wins the White House and gets her way with the nation's tax code. The Clintons and the Trumps would face much bigger tax bills.
For starters, Hillary has proposed a 4 percent surcharge on incomes (including investment income) over $5 million a year. She backs the Buffett Rule, which requires those earning above $1 million a year to pay at least 30 percent to Uncle Sam. Like Bernie Sanders, Clinton has long supported ending the "carried interest exemption" that allows hedge fund managers and private equity investors (like Mitt Romney) to pay the much lower capitals gains rate (20 percent) rather than the income tax rate (as high as 39.6 percent) on their annual earnings. Just as important for those on Wall Street, Hillary would change the treatment of capital gains, where still-low tax rates are one of the biggest factors behind America's record-high levels of income inequality. For individuals earning over $411,500 a year ($464,850 for families), capital gains on investment income would be taxed at the same rate as earned income (39.6 percent). For this top 0.5 percent of taxpayers, rates would decline each year, until reaching 20 percent for investments held six years or longer.
To be sure, Secretary Clinton's speaking fees have been an issue throughout the Democratic primaries. As CNN documented the windfall in February:

Hillary Clinton and her husband, former President Bill Clinton, combined to earn more than $153 million in paid speeches from 2001 until Hillary Clinton launched her presidential campaign last spring, a CNN analysis shows.
In total, the two gave 729 speeches from February 2001 until May, receiving an average payday of $210,795 for each address. The two also reported at least $7.7 million for at least 39 speeches to big banks, including Goldman Sachs and UBS, with Hillary Clinton, the Democratic 2016 front-runner, collecting at least $1.8 million for at least eight speeches to big banks.

No doubt, those audiences and those dollar figures don't present the greatest optics for Hillary Clinton. But more context, which CNN itself reported last year, tells a somewhat different story. Unlike most wealthy Americans (and wealthy presidential candidates, "she and her husband paid an effective federal tax rate of 35.7 percent and a combined federal, state, and local effective rate of 45.8 percent last year."

In a lengthy statement and on her campaign website, Clinton detailed that she and her husband, former President Bill Clinton, paid more than $43 million in federal taxes from 2007 to 2014, over $13 million in state taxes and donated nearly $15 million to charity over the same period.

All of which means Hillary and Bill--and The Donald--would be paying a lot more to Uncle Sam under a Clinton administration.
As for President Trump, his future winnings will be YUGE, no matter what candidate Trump says now. As Kessler summed it up in September:

If more information becomes available--such as the release of Trump's tax returns or more details on his tax plan--we will of course update, and if necessary adjust this ruling. But for now it's a Four Pinocchio statement.

As things look now, Trump's will remain a Four Pinocchio statement because the Donald is too chicken to put his money where his mouth is.