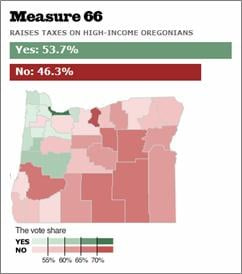 Just one week after the media chattering classes announced that Republican Scott Brown's upset win in Massachusetts represented a political sea change, voters in Oregon sent an unmistakable message of their own. And to be sure, they signaled an important win for Democrats and their progressive allies.
Rather than gut school funding and other essential government services during a recession like most states, Oregonians voted to raise taxes on the wealthiest residents and boost the minimum corporate tax from its shocking level of $10 a year.
As the New York Times noted this morning, Tuesday's special election became necessary when anti-tax advocates turned to Measures 66 and 67 to undo three quarters of a billion in funding for education and other programs:

The Legislature, controlled by Democrats, has already put the $727 million into the current budget. So if the ballot items, known as Measures 66 and 67, had been rejected, lawmakers would have been forced to hold a special session to find other ways to reduce spending or raise revenue.

And in what is a recurring theme for the nation as a whole, the New York Times in its election preview Sunday suggested who would vote for - and who would benefit from - the passage of the ballot measures in a state which hadn't voted for an income tax increase since 1930:

Yet if the measures pass, it will probably not be because of support here in largely conservative southwest Oregon. Too many times the state has proposed too many taxes, many residents here say, and this is no exception, never mind the school troubles.

Instead, experts say, if the measures pass it will be because Oregon lawmakers found a way to narrowly focus a tax increase that more liberal parts of the state could tolerate, even at a time when a tax increase could not be harder to digest.

Which is exactly what unfolded last night. In an election with 59% turnout statewide, voters approved both Measure 66 (which raises taxes on households with taxable income above $250,000) and Measure 67 (which sets sets higher minimum taxes on corporations and increases the tax rate on upper-level profits) by a comfortable 6 point, 90,000 vote margin.
As the Oregonian's Jeff Mapes concluded, the ballot measures' passage vindicated Governor Kulongoski, the Democratic legislature and its union supporters, which helped the "Yes" campaign outspend by $6.8 million to $4.6 million the "No" forces led by Nike's Phil Knight and Columbia Sportswear's Tim Boyle:

The strong "Yes" vote is the vindication of a risky strategy by majority Democrats and their union allies. During the Legislature, Kevin Looper, who ran the union-backed Yes campaign, told Democratic lawmakers that polling showed that a tax measure focused on the well-to-do and on corporations would win favor with voters.

All of which is a message that President Obama and Democrats in Congress need to hear. Of course, whether the mainstream media was listening is another matter altogether.
For more background on Oregon managed to preserve its budget while raising its per capita burden from 36th to 34th and business taxes from 3rd lowest in the nation to 5th lowest, visit BlueOregon here and here.
(This piece also appears at Crooks and Liars.)