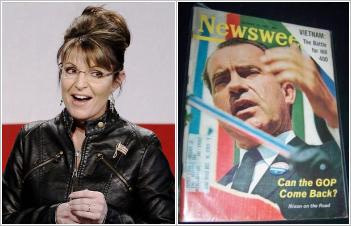 While Richard Nixon never donned the dominatrix-on-a-motorcycle look on the campaign trail, Sarah Palin in many other ways appears to be following Tricky Dick's path to the White House. Similarly a "serial collector of resentments," Palin's language of "real Americans" who aren't "going to sit down and shut up" in the face of "lame-stream media lies" stirs echoes of Nixon's "silent majority." More importantly, Palin like Nixon in 1966 is targeting vulnerable Democrats in traditionally conservative districts to win Republican gratitude for a presidential run two years later.
In urging her supporters to "RELOAD" and "Take Back the 20," the half-term Alaska Governor was very clear about which Democrats were in her crosshairs:

Harry Reid's hometown of Searchlight, Nevada and the others stops on Palin's Tea Party Express tour may not literally retrace the path of old Route 66. But intentionally or not, Sarah Palin seems to be following Richard Nixon's road to the White House.
That is just one of the many parallels which emerge from Rick Perlstein instant classic, Nixonland. Among other examinations of the politics of Richard Nixon, Perlstein recounts in detail how the Democratic landslide of 1964 within eight short years was eviscerated by the Nixon tidal wave of 1972. And the first step was the Republicans' overwhelming triumph in the 1966 midterms, an electoral watershed that washed 47 Democrats out of Congress.
Central to the turnaround was Richard Nixon. Six years after his razor-thin loss to John F. Kennedy, four years after his humiliating defeat in the California governor's race and two years after Lyndon Johnson won 61.1% of the vote, 44 states and 486 electoral votes, Nixon started his path to political resurrection in the run-up to the 1966 midterms. Capitalizing on the growing unease over the war in Vietnam and the building backlash against race riots and the welfare state, Nixon launched an aggressive, nationwide campaign of fundraising and campaign visits. His target: the new liberal Democratic freshmen who rode Johnson's coattails to take historically conservative seats.
Foreshadowing the culture warriors, gay bashers and Tea Baggers who now dominate Republican politics and right-wing radio, Nixon spoke to his audiences in code about Watts rioters and welfare recipients on the dole. It's easy to imagine that it was not Richard Nixon but instead Sarah Palin warning about Obama's "death panels" or FEMA concentration camps run by what Rush Limbaugh and Glenn Beck deemed a "racist", an "angry black man" who "hates white people":

He was campaigning in traditionally Republican districts where a Democratic congressman had won in 1964 on Lyndon Johnson's coattails, but was likely to be swept out in the conservative backlash.
For instance, Iowa's first district. A five-term Republican, Fred Schwengel, was running to recover the seat he'd lost to a young political science professor from the Bronx named John Schmidhauser. One day, Representative Schmidhauser appeared at a farm bureau meeting, prepared for a grilling on the Democrats' agricultural policies. The questions, though, were all on rumors that Chicago's Negro rioters were about to engulf Iowa in waves, traveling, for some reason, "on motorcycles." The liberal political science professor was as vulnerable as a sapling...Now that farmers were afraid that Martin Luther King would send Negro biker gangs to rape their children, the Republican restoration seemed inevitable.

The Republican sweep which ensued in 1966 yielded immediate dividends for Nixon. As the 1968 presidential election neared, GOP Congressmen across the country were indebted to Nixon. Just as important, as Perlstein documented, Nixon was able to successfully portray the Republican victory as the result of the basest racial politics, but instead a rejection of President Johnson:

The misinterpretation that this was not a backlash election suited Richard Nixon just fine. He had studied the districts that Democrats had picked up in the sweep of 1964 and found them, still, essentially Republican. There were forty-seven of them. And although the districts did not match up exactly, forty-seven was the number of seats the Republicans picked up in 1966, in an election which the press now retroactively framed, not as it actually was, a referendum on the Negro revolution, but as what Nixon said it was: a referendum on Lyndon's Vietnam leadership, with Nixon's vision as the alternative. Warren Weaver of the New York Times obliged Nixon's interpretation by writing the next week that of the sixty-six House candidates Nixon had campaigned for, forty-four had won. The victory rate of the 319 Republicans who weren't afforded a Nixon visit was 44.8 percent. RFK's record was only 39 out of 76..."The political equivalent of the batting championship for the 1966 campaign season went to former Vice President Richard Nixon."
Better yet, the article added, "national political leaders do not like to waste their time campaigning for heavy favorites; if they did, their average would be much higher."
Nixon had bamboozled the Times. Wasting his time on candidates he thought most likely to win was exactly what he had been doing.

Of course, much has changed since 1966. The electoral map has changed dramatically and the racial subtext dominating American politics (as evidenced in part by Obama's election) has been significantly altered. Nixon's Southern Strategy had not completed the transformation of the South into a Republican stronghold; the migration of conservative Democrats into the GOP was not complete until Ronald Reagan swept into the White House. Ejected in 2006 and 2008 from New England, the Republican Party is now far more southern, white and conservative than in the 1960's. And, importantly, a Democratic base reenergized after President Obama's big win on health care may well have stemmed the tide of the Republicans' ersatz populist momentum.
Of course, the Palin-Nixon parallel quickly breaks down in a host of other ways. Unlike the Quittah from Wasilla, Richard Nixon brought extensive experience to the race as a former Congressman and two-term Vice President. And despite their shared paranoia about liberal elites and their common appropriation of the machinery of government for their own personal, political ends, Sarah Palin could never approach Richard Nixon's intellect and policy expertise. More venal than Tricky Dick, Palin will continue to cash in on her reality star status whether she ever runs for the White House or not.
Still, while it's almost inconceivable that she would ever get there, Sarah Palin is hoping to take Nixon's Route 66 to 1600 Pennsylvania Avenue.