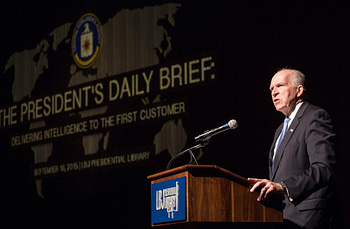 As more details surfaced this week about the extent of Russian interference with the 2016 presidential election, its winner Donald Trump shocked intelligence leaders from both parties with his announcement that he only receives briefings once a week. "I'm, like, a smart person," Trump declared last Sunday, "I don't have to be told the same thing and the same words every single day for the next eight years."
After Trump brushed off as "ridiculous" what former acting CIA director Michael Morrell called "the political equivalent of 9/11," a stunned Michael Hayden responded "to have the president-elect of the United States simply reject the fact-based narrative that the intelligence community puts together because it conflicts with his a priori assumptions--wow." For his part, former Obama CIA chief Leon Panetta warned Trump that in the event of a future attack by any enemy of the United States "the responsibility for that attack would fall on the president."
Especially if the greatest threat to U.S. national security comes from the president himself. To sum up the clear and present danger Trump poses, what follows is a Presidential Daily Brief (or PDB) for Dec. 18, 2016. This PDB is one incoming National Security Adviser General Michael Flynn will never share with his boss. To paraphrase one of Flynn's predecessors, it should be titled "Trump Determined to Strike in U.S."
OVERVIEW: TRUMP DETERMINED TO STRIKE IN U.S.
Clandestine, foreign government, and media reports indicate Donald Trump since at least 2011 has wanted to conduct attacks in the U.S. Trump implied in media interviews between 2011 and 2016 that the current president was not born in the United States, and that his adherents would follow his example to "bring the fight to America."
After a U.S. humor strike on his media base in America on April 30, 2011, Trump told followers he wanted to retaliate in Washington, according to a [REDACTED] service.
We have not been able to corroborate some of the more sensational threat reporting, such as that from opposition leaders such as [REDACTED] saying that Trump knew in advance of Russian plans for cyberattacks on the Democratic Party intended to gain the release of Clinton campaign emails.
Nevertheless, FBI information since that time indicates patterns of suspicious activity in this country consistent with preparations for hijackings of the public good and the public Treasury. These include plans to undermine core U.S. democratic institutions including voting rights, press freedom, and religious liberty, as well as the privatization of fundamental government services in ways likely to jeopardize Americans' standard of living. The Trump jihad against the pillars of Americans foreign policy--summarized as "appease Russia, provoke China, and attack Iran"--poses a double threat to U.S. national security and its allies in both Europe and the Pacific.
Continue reading the detailed threat assessments at Daily Kos.