"Reagan," Vice President Dick Cheney famously declared in 2002, "proved deficits don't matter." Unless, that is, a Democrat is in the White House. After all, while Ronald Reagan tripled the national debt and George W. Bush doubled it again, each Republican was rewarded with a second term in office. But as the Gallup polling data show, concern over the federal deficit hasn't been this high since Democratic budget balancer Bill Clinton was in office. All of which suggest the Republicans' born-again disdain for deficits ranks among the greatest - and most successful - political double-standards in recent memory.
The triumph of the GOP messaging machine is reflected in a new Washington Post/Pew Research poll. In just the four months since the Republican majority took control of the House, the percentage of Americans believing the budget deficit is a major problem which must be addressed now catapulted from 70% to 81%. But even more revealing is an April Gallup survey which showed the deficit (17%) rivaling the unemployment (19%) and the overall state of the economy (26%). And as it turns out, those cyclical swings in budget angst reflect the complete victory of the conservative deficit narrative.

As predicted at the time, Reagan's massive $749 billion supply-side tax cuts in 1981 quickly produced even more massive annual budget deficits. Combined with his rapid increase in defense spending, Reagan delivered not the balanced budgets he promised, but record-settings deficits. Ultimately, Reagan was forced to repeatedly raised taxes to avert financial catastrophe, including the last major bipartisan tax code overhaul in 1986. By the time he left office in 1989, Ronald Reagan nonetheless more than equaled the entire debt burden produced by the previous 200 years of American history. It's no wonder the Gipper cited the skyrocketing deficits he bequeathed to America as perhaps his greatest regret.
Of course, President George H.W. Bush would come to lament them even more. Despite his legendary 1988 campaign pledge of "read my lips - no new taxes," Bush the Elder just two years later was forced to break his promise. As PBS recounted:

This "could mean a one term Presidency," he confided to his diary, "but it's that important for the country."

Bush 41 was right on both counts.
For his part, Bill Clinton faced a double-whammy on the deficit issue. He was, after all, a Democrat. And in 1992 and again in 1996, Clinton was confronted with the third party candidacy -and the pie charts - of Ross Perot. But when President Clinton proposed boosting the top tax rate to 39.6% to help close the yawning Reagan/Bush budget gaps, every single Republican in the House and Senate voted no. While then Rep. John Kasich (R-OH) told Clinton and the Democrats, "your economic program is a job killer," Dick Armey looked into his crystal ball to claim:

"Clearly this is a job killer in the short run. The revenues forecast for this budget will not materialize; the costs of this budget will be greater than what is forecast. The deficit will be worse, and it is not a good omen for the American economy."

Most dramatic of all was Texas Senator Phil Gramm. The same man who led the 1990's crusade to gut regulation of Wall Street and the IRS and later called America a "nation of whiners," boldly - and wrongly - predicted:

"I believe hundreds of thousands of people are going to lose their jobs...I believe Bill Clinton will be one of those people."

As it turned out, not so much. In 1996, Bill Clinton buried Bob Dole. Then in his second term, he buried the budget deficit as well.
Then came George W. Bush, who promised in his 2001 message to Congress:

At the end of those 10 years, we will have paid down all the debt that is available to retire. That is more debt repaid more quickly than has ever been repaid by any nation at any time in history.

Instead, President Bush produced red ink as far as the eye can see. After inheriting a federal budget in the black and CBO forecast of a $5.6 trillion surplus over 10 years, President George W. Bush quickly set about dismantling the progress made under Bill Clinton. Even with two unfunded wars and the similarly unpaid Medicare prescription drug benefit, Bush's $1.4 trillion tax cut in 2001, followed by a $550 billion second round in 2003, accounted for half of the yawning budget deficits he produced. As the Center on Budget and Policy Priorities explained, if made permanent those Bush tax cuts if made permanent, would add more to the national debt over the next decade than the impact of Iraq, Afghanistan, the recession, the stimulus and TARP - combined.
During his presidency, Republicans in Congress voted seven times to raise the debt ceiling, the last to $11.3 trillion. By the time George W. Bush ambled out of the White House, he left his successor a $1.2 trillion budget deficit for 2009.
Barack Obama inherited two wars, a doubled national debt, and that $1.2 trillion deficit from George W. Bush. (As Orrin Hatch described the Bush years, "it was standard practice not to pay for things.") But one thing was new: Republican concern about the budget deficit. 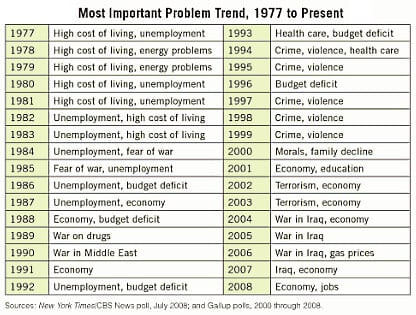 "President Obama's agenda, ambitious as it may be, is responsible for only a sliver of the deficits, despite what many of his Republican critics are saying," the New York Times' David Leonhardt explained in 2009, adding, "The economic growth under George W. Bush did not generate nearly enough tax revenue to pay for his agenda, which included tax cuts, the Iraq war, and Medicare prescription drug coverage." That fall, former Reagan Treasury official Bruce Bartlett offered just that kind of honesty to the born again deficit virgins of his Republican Party. Noting that the FY2009 deficit of $1.4 trillion was solely due to lower tax revenues and not increased spending, Bartlett concluded:

"I think there are grounds on which to criticize the Obama administration's anti-recession actions. But spending too much is not one of them. Indeed, based on this analysis, it is pretty obvious that spending - real spending on things like public works - has been grossly inadequate. The idea that Reagan-style tax cuts would have done anything is just nuts."

Which is exactly right. Thanks to the steep recession, as the Congressional Budget Office (CBO) and others have documented time and again, the overall federal tax burden as a percentage of GDP is now below 15%, "levels that low have not been seen since 1950." And as Jonathan Cohn and Paul Krugman each explained, it is not a mythical Obama "spending binge" but the drastic loss of revenue combined with automatic increases in mandated safety net outlays that is producing the current budget gaps.
Nevertheless, only now - with Democrat Barack Obama in the Oval Office - Republicans like John Boehner warn Americans that "unsustainable debt and deficits threaten the prosperity of our children." But despite their fear-mongering, the GOP would make the situation much, much worse. December's two year tax cut compromise will add $800 billion to the deficits this year and next. And by making the Bush tax cuts permanent and lowering the top rate to 25%, the Ryan budget just passed by the House would drain over $4 trillion from the U.S. Treasury.
Back in June, Rhode Island Democratic Senator Sheldon Whitehouse lamented the double-standard at work in the Republicans' posturing on the national debt:

Apparently, Sheldon Whitehouse and his Democratic allies don't understand how this game works. As Cheney said, "Reagan proved deficits don't matter."
Unless, of course, a Democrat is in the White House.