Recession's Brief Dip in Income Inequality is Already Over 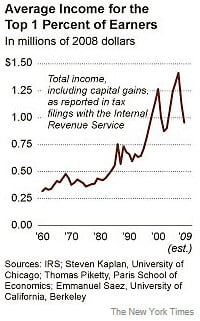 With the rise of the Occupy movement and confirmation from the nonpartisan CBO that the U.S. income gap is at its highest level since 1929, defensive conservatives by necessity spawned a thriving if laughable cottage industry in income inequality denialism. Now with word from the New York Times that the share of income for the top 1 percent dropped from 23 to 17 percent between 2007 and 2009, you can expect more cries of "so get a time machine, Occupy Wall Street!"
But the right-wing echo chamber need not worry about the plight of the tragically rich. While working Americans continue to struggle as the economy slowly recovers from the Bush recession, the rebound of Wall Street has ensured that the upper crust has already recouped its losses. As the data show, millionaires are not only making a rapid comeback. For the gilded class, the economic downturn is already over.
Seizing on federal tax data showing that the average income for the top 1 percent fell to $957,000 in 2009 from $1.4 million in 2007, conservatives have complained that income inequality is so over:

Analysts say the drop largely reflects the stock market plunge, and most think top incomes recovered somewhat in 2010, as Wall Street rebounded and corporate profits grew. Still, the drop alters a figure often emphasized by inequality critics, and it has gone largely unnoticed outside the blogosphere.

By focusing on the top 1 percent, the Occupy Wall Street movement has made economic fairness a subject of street protest and political debate.

"It's very interesting that this has become such a big topic now when the numbers are back to where they were in the 1990s," said Steven Kaplan, an economist at the University of Chicago's business school. "People didn't seem to be complaining about it then."

That might have been because during the 8-year Clinton boom that generated 23 million new jobs, the rising tide for once did lift all (or at least most) boats. But after the Bush recession that started in December 2007, many Americans' dinghies were capsized by yachts once again cruising at full speed. As it turns out, the recession that has proved so devastating for most Americans for the wealthy has been merely a hiccup.

That became abundantly clear almost as soon as the media started lamenting the suffering of the well-to-do two years ago. In the fall of 2009, David Leonhardt and Geraldine Fabrikant of the New York Times concluded, "After a 30-year run, [the] rise of the super-rich hits a sobering wall."

They began to pull away from everyone else in the 1970s. By 2006, income was more concentrated at the top than it had been since the late 1920s. The recent news about resurgent Wall Street pay has seemed to suggest that not even the Great Recession could reverse the rise in income inequality.

But economists say -- and data is beginning to show -- that a significant change may in fact be under way. The rich, as a group, are no longer getting richer. Over the last two years, they have become poorer. And many may not return to their old levels of wealth and income anytime soon.

As it turned out, that time wasn't just soon. It's now.
The Los Angeles Times announced the return of record-setting income inequality in June 2010 in an article titled, "Millionaires Make a Comeback." After getting pummeled as Wall Street plummeted in 2008, the rich have begun to recoup their losses. The short period of Gilded Interrupted is over:

In 2008, as the financial crisis raged, the stock market hit bottom and the Great Recession ate into the economy, the number of millionaires in the United States plunged.
But last year the number of millionaires bounced up sharply, the data show.
And after that decline and rebound, the millionaire class held a larger percentage of the country's wealth than it did in 2007.
"It's been a recession where everyone took a hit -- with the bottom taking a bigger hit," said Timothy Smeeding, a University of Wisconsin professor who studies economic inequality. But "the wealthy alone have bounced back."

Bounced back, it turns out, with a vengeance. The Boston Consulting Group found that "the number of U.S. households with at least $1 million in "bankable" assets climbed 15% last year to 4.7 million after tumbling 21% in 2008." Despite there being 10% fewer millionaires than in 2007, the percentage of Americans' total wealth held by those households was slightly higher, growing to 55%. Executive pay rose by 23% last year. By last summer, the Wall Street Journal proudly proclaimed, "U.S. Economy Is Increasingly Tied to the Rich."
Writing in the Washington Post in June 2010, Ezra Klein neatly summed up the dynamic which has restored income inequality to record highs even as the U.S. economy struggles to recover:

The basic story here is that assets have recovered so much more quickly than the broader economy that in 2009, "the millionaire class held a larger percentage of the country's wealth than it did in 2007." In other words, inequality has actually gotten worse. If you want to see why that's unexpected, check out the chart I cadged from the Center for Budget and Policy Priorities: After the Great Depression, inequality fell and didn't recover until 2007. That's about 80 years. After the Great Recession, inequality fell and didn't recover until ... 2009? That's one year.

And while the going was still tough for most Americans, the replenished rich went shopping.
That's also the word from the New York Times, which reported in August that "sales of luxury goods are recovering strongly." While America's so-called "job creators" didn't create jobs after receiving their decade-long Bush tax cut windfall, they did buy a lot of expensive shoes:

Nordstrom has a waiting list for a Chanel sequined tweed coat with a $9,010 price. Neiman Marcus has sold out in almost every size of Christian Louboutin "Bianca" platform pumps, at $775 a pair. Mercedes-Benz said it sold more cars last month in the United States than it had in any July in five years.

Even with the economy in a funk and many Americans pulling back on spending, the rich are again buying designer clothing, luxury cars and about anything that catches their fancy. Luxury goods stores, which fared much worse than other retailers in the recession, are more than recovering -- they are zooming. Many high-end businesses are even able to mark up, rather than discount, items to attract customers who equate quality with price.

As Arnold Aronson, managing director of retail strategies at the consulting firm Kurt Salmon, put it, "If a designer shoe goes up from $800 to $860, who notices?"
The Wall Street Journal, for one. In "Millionaires Go Missing," the Journal grumbled that "if equality of income is the priority, liberals should be thrilled with the last four years":

This month the IRS released more detailed tax data for 2009, and the nearby table records the decline of the taxpaying rich.

Those with $10 million or more in reported income fell to 8,274 from 18,394 in 2007, a 55% drop. As a result, their tax payments tanked by 51%. These disappearing millionaires go a long way toward explaining why federal tax revenues have sunk to 15% of GDP in recent years. The loss of millionaires accounts for at least $130 billion of the higher federal budget deficit in 2009. If Warren Buffett wants to reduce the deficit, he should encourage policies to create more millionaires, not campaign to tax them more.

Fox News host Stuart Varney dutifully regurgitated the claim, declaring that "the number of millionaires, of people making the million dollars a year, down very, very sharply."
Of course, that wasn't the case very long. Froma Harrop explained the easily solved case of the "missing millionaires" earlier this year:

That rebound in the stock market, combined with the historically low capital gains tax rates paid by the gilded class, explains why the wealthy were able to so quickly "replenish the ol' coffers." (Now, most of the Republican presidential candidates want to eliminate the capital gains tax altogether.)
As the Washington Post recently explained, for the very richest Americans the successive capital gains tax cuts from Presidents Clinton (to 20 percent) and Bush (to 15 percent) have been "better than any Christmas gift":

This convenient chart tells the tale of how "capital gains tax rates benefiting wealthy feed [the] growing gap between rich and poor":

It also explains why between 2001 and 2007- a period during which poverty was rising and average household income had fallen - the 400 richest taxpayers saw their incomes double to an average of $345 million even as their effective tax rate was virtually halved. As Seth Hanlon of the Center for American Progress summed it up:

Still, it is true, as a Deloitte presentation to wealth managers reported, "The number of millionaire households in the U.S. seemed to peak in 2006." But right-wing water carriers like Megan McArdle and James Pethokoukis must have missed Deloitte's next sentence:

The most significant drop may have occurred during the financial crisis, although the number of millionaire households seems to have returned to its pre-crisis levels.

So while McArdle complained that "We don't want to spend years focused on income inequality, only to learn that the financial crisis fixed it for us," Larry Mishel of the Economic Policy Institute rightly pointed out that Americans must still mind the gap:

"The recession is going to end up accentuating the inequalities of income and wealth we've seen for 30 years. This requires attention if we're going to see robust wealth growth going forward."