For years, red state socialism - the steady, one-way flow of taxpayer dollars from Washington DC to solidly Republican states - has been one of the defining traits of American federalism. Which is why the conservative charge that Wisconsin schools - and their unionized teachers - received $670 million in federal funding is so laughable. As it turns out, the federal government pays for red state education at a much, much higher rate.
From the beginning, the Republican union-busting crusade in Wisconsin and nationwide has depended on easily refuted myths about public employees. Since 2008, state and local governments have shed hundreds of thousands of jobs. And far from being overpaid and undeserving, government workers are compensated less than their similarly situated private sector counterparts. (The Economic Policy Institute found that "full-time state and local government employees in Wisconsin are undercompensated by 8.2%, when compared to otherwise similar private-sector workers.")
But one statistic regurgitated by the Terence Jeffrey of CNS News is true. Sadly for Jeffrey, it is, as we'll see below, shockingly hypocritical:

The federal government gave $669.6 million to the public schools in Wisconsin in fiscal 2008, according to the Department of Education's National Center for Education Statistics (NCES). That is more than 20 times as much as the $30 million that Wisconsin Gov. Scott Walker is trying to save in the current fiscal year by asking state employees, including teachers, to pay for a fraction of the cost of their own pension packages and health-insurance premium.
Because of this federal subsidy, taxpayers in the 49 other states make a handsome contribution to the salary and benefits packages of Wisconsin school teachers.

As it turns out, of course, it is blue state taxpayers who are bankrolling the education of their less well-off red state cousins.
As a quick glance at the NCES data shows, the Badger State did indeed get $669.6 million in education funding from the federal government in 2008, dollars which represented about 6.4% of Wisconsin's $10.49 billion school budget. Unfortunately for Jeffrey, Texas - a state with about four and a half times as many people - got $4.57 billion from Washington, funds which paid for 10% of its $45.6 billion in total education outlays. Alabama, with about a million fewer residents than Wisconsin, pocketed more education money from Washington. The $744 million in aid makes up 9.7% of its $7.69 billion in primary and secondary school spending.
The table below shows why the right-wing attack on federal funding for Wisconsin's schools and teachers will boomerang. Republican-dominated red states simply get much more. 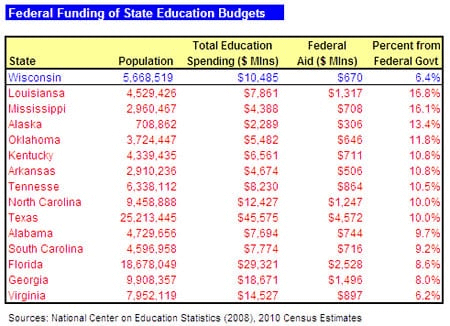 Of course, there isn't anything untoward or inappropriate in the underwriting of red states by blue ones. After all, many of these Republican states are disproportionately home both to key defense contractors and military bases which help ensure U.S. national security. More important, most Americans nationwide want to provide the funding and resources for the education, health care and anti-poverty programs their red state brethren badly need - and deserve
Nevertheless, the dynamic of red state socialism is one Republican leaders predictably refuse to acknowledge. 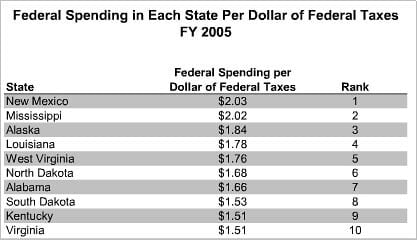 As a 2007 analysis of 2005 data (above) of federal spending per tax dollar received by state shows, the reddest states generally reaped the most green. Eight of the top 10 beneficiaries of federal largesse voted for John McCain for President; all 10 backed George W. Bush four years earlier. Unsurprisingly, all 10 states at the bottom of the list - those whose outflow of tax revenue is funding programs elsewhere in the country - all voted for Barack Obama in 2008.
The numbers for Sarah Palin's Alaska are particularly telling. While Palin declared she would reject $288 million (31%) of the $931 million in stimulus funds allocated for schools, energy assistance and social services, her state led the nation in earmark dollars received per capita in the omnibus spending bill passed in the spring of 2009. (Alaskans got almost $210 per person in earmarks, while Californians got $16 and New Yorkers $13 in comparison.) Overall, Alaska ranked third in the federal gravy train, taking in $1.84 from Washington for each dollar sent there. (Wisconsin, by the way, ranked 39th.)
Yet, that didn't stop half-term Governor Palin from declaring on her final day in office:

"We can resist enslavement to big central government that crushes hope and opportunity. Be wary of accepting government largesse; it doesn't come free. And often, accepting it takes away everything that is free. Melting into Washington's powerful, care-taking arms will just suck incentive to work hard and chart our own course right out of us. And that not only contributes to an unstable economy and dizzying national debt, but it does make us less free."

And as she attacked Wisconsin public employees on Facebook last week, she had a message - and some revisionist history - for her "union brothers and sisters":

One final word of warning to my fellow Americans: back in 2009, I warned about what would happen if states accepted short-term unsustainable debt-ridden "Stimulus Package" funds. Accepting those funds allowed states to grow government, increase already unsustainable levels of spending, kick the can down the road on reforming entitlements, and create public expectations that they would continue financing these new mandates once the federal funds ran out. States were not in a position to grow government and take on new financial commitments then, and now the chickens have come home to roost. As goes Wisconsin today, so goes the country tomorrow.

Well, not Wisconsin so much as Texas. While the Lone Star state generally has not been a disproportionate recipient of federal taxpayer dollars, Uncle Sam saved Governor Rick Perry's budgetary bacon.
While state spending jumped by 69% from 2001 to 2009 under his watch, Perry rejected some of federal stimulus money in 2009, bragging that ""this was pretty simple for us...We can take care of ourselves." As it turns out, as ThinkProgress noted, Perry was only able to put off addressing Texas' $25 plus billion deficit for a year thanks to federal government:

Turns out Texas was the state that depended the most on those very stimulus funds to plug nearly 97% of its shortfall for fiscal 2010, according to the National Conference of State Legislatures. Texas, which crafts a budget every two years, was facing a $6.6 billion shortfall for its 2010-2011 fiscal years. It plugged nearly all of that deficit with $6.4 billion in Recovery Act money, allowing it to leave its $9.1 billion rainy day fund untouched.

Meanwhile, over at the conservative blog Protein Wisdom, Jeff Goldstein dutifully echoed today's right-wing meme. "Turns out you don't have to live in Wisconsin to pay the benefits of Wisconsin teachers." Of course, if you're a blue state taxpayer, you're paying an awful lot more for teachers - and everything else - in red state America.

One comment on “Red State Socialists' Attack on Wisconsin Backfires”