Republican Parents Vote for Obamacare with Their Wallets

Over the last few weeks, Republicans have been waging a very determined--and even more deceptive--campaign to scare the bejesus out of uninsured young adults so important to the success of the Affordable Care Act. But while the conservative commentariat has been issuing dire warnings about the so-called "Young Invincibles," their parents have quietly added millions of them to their family insurance plans, all thanks to Obamacare. And as it turns out, Republican parents are signing up in greater numbers than Democrats. 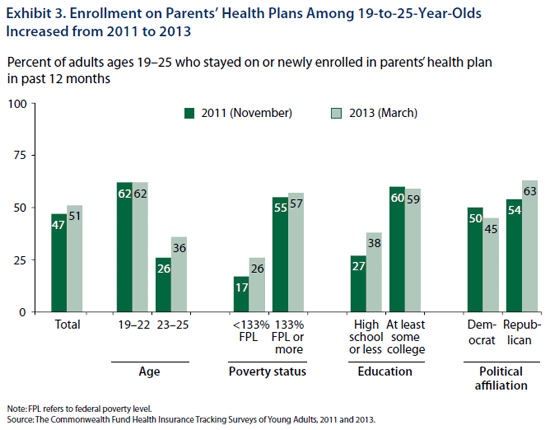 That's the word from the Commonwealth Fund, which has just published a major analysis of the health insurance status and plans of young adults ages 18 to 35. Among the host of insurance reforms put in place by the Affordable Care Act is the requirement that parents be allowed to keep or add their adult children up to age 26 to their policies. As Sarah Kliff reported, in the three-plus years since President Obamas sign the ACA into law, millions have done just that:

The Commonwealth Foundation estimates that of the 15 million young adults that have insurance coverage through a parent, 7.8 million would not have qualified without this policy.

All told, 15 million young adults enrolled in or stayed on their parents' policies. That's why the percentage of uninsured among them has declined since the passage of the ACA. And despite all the right-wing demagoguery, it turns out that the biggest beneficiaries have been young Republicans:

While public opinion polls have consistently shown a partisan divide in views of the health reform law, the survey finds that young adults who identified themselves as Republicans enrolled in their parents' policies in greater numbers than young adults who identified themselves as Democrats. In March 2013, 63 percent of Republican young adults had enrolled in a parent's policy in the past 12 months, compared with 45 percent of Democrats.

The results aren't really that surprising. After all, GOP households generally are higher income and more likely to have a parent insured by their employer or through a self-purchased policy. So while these Republicans may be voting for the repeal of the Affordable Care Act on Election Day, they are voting for Obamacare with their wallets.