Republicans Give Thanks for Short Memories 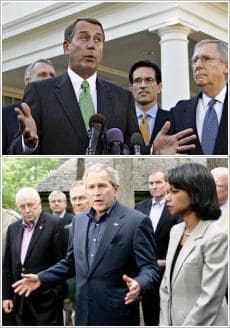 Former Bush press secretary Dana Perino's jaw-dropping statement Wednesday that "we did not have a terrorist attack on our country during President Bush's term" didn't merely serve to confirm President Obama's terrible judgment in appointing her to the Broadcasting Board of Governors. As it turns out, Perino's clumsy whitewashing of the 9/11 attacks is just the latest (if most pathetic) installment of the ongoing GOP project to selectively erase history. From their disaster in Iraq and neglect of Afghanistan to their budget-busting deficits and more, Republicans on this day are no doubt giving thanks for short memories.
Of course, Dana Perino is only a minor figure in the Republican program of targeted amnesia, and a less successful one at that. Her butchery of the fatiguing GOP talking point that "Bush kept us safe" after 9/11 highlighted the Republicans' favorite historical asterisk. But her gaffe also served as a reminder of other Perino classics, such as "we did not torture," her October 2008 insistence that "I don't think anybody could tell you right now if we're in a recession or not," and her 2007 admission of ignorance about the Cuban Missile Crisis.
But if anyone should be thanking his Maker for the short memories of the American people - and even shorter recall of the American media - it's Dick Cheney.
No one has been as gravely and consistently wrong on matters of war and peace as the former Vice President. As he blasts President Obama for "inexcusable" delays and "dithering" in escalating the U.S. effort in Afghanistan, Cheney is predictably silent about the Bush administration's catastrophic under-resourcing of that conflict, a bare-bones effort made worse by the misadventure in Iraq. After all, George W. Bush admitted as much in March 2002 after the fiasco in Tora Bora:

"So I don't know where he [Bin Laden] is. You know, I just don't spend that much time on him, Kelly, to be honest with you...I'll repeat what I said. I truly am not that concerned about him."

Cheney's impersonation of the mind-wiping agents in Men in Black hardly ends there. Despite the five deferments he received to keep him out of military service in Vietnam, Cheney this week criticized Obama from the "perspective" of our fighting men and women:

"I worry that there's a lack of understanding there of what this means from the perspective of the troops. You know, if you're out there on the line day in and day out and putting your life at risk on a volunteer basis for the nation, and you see the Commander in Chief unable, to or appearing to be unable, to make a decision about the way forward here -- you know that raises serious doubts. Nobody wants to think of volunteering to be participate in that kind of operation."

Obama critic Cheney also assumes the American people will forget his own dismal record of calamitously wrong predictions about the war in Iraq. Two days before the invasion of Iraq and over 4,000 U.S. deaths ago, Cheney announced:

"My belief is we will, in fact, be greeted as liberators."

In mid-2005, Vice President Cheney saw light at the end of the tunnel:

"The level of activity that we see today from a military standpoint, I think, will clearly decline. I think they're in the last throes, if you will, of the insurgency."

Almost as loud in his denunciations of President Obama but with an even worse track record that Dick Cheney is John McCain. On Wednesday, McCain slammed Obama's upcoming announcement on Afghanistan, "I would like to see the emphasis on succeeding, not on an exit strategy." This from the man who in July 2003 said the United States "can muddle through" in its war in Afghanistan.
Sadly, McCain's catalog of error on Iraq is much lengthier. From his predictions of a short war, claims U.S. troops would be greeted as liberators and that the U.S. would find weapons of mass destruction to his announcements of mission accomplished, his ongoing confusion over friend and foe in Iraq and so much more, John McCain was wrong at virtually every turn.
Then there's former Bush National Security Adviser and Secretary of State Condoleezza Rice.
This week, Condi and her Bush ally Stephen Hadley announced the launch of their new consulting company. But given her laughable "dog ate my homework" defense of her days in the Bush White House, potential clients of her strategic advisory firm would do well to steer clear of The RiceHadley Group.
But in the aftermath of the horrific 9/11 attacks, Condi Rice has played the role of a reverse Nostradmus, detailing the myriad foreign policy and security disasters she failed to predict. Confronted by 9/11 commissioner Richard Ben Veniste about the August 6, 2001 PDB (Presidential Daily Brief) which warned of "patterns of suspicious activity in this country consistent with preparations for hijackings or other types of attacks," national security adviser Rice responded:

"I believe the title was 'Bin Laden determined to strike in U.S.'"

Two weeks later on April 24, 2004, Rice took to the op-ed pages of the Washington Post to argue, "No al-Qaeda threat was turned over to the new administration." And in an argument she would later make repeatedly, Rice first introduced the now ubiquitous "nobody could have predicted" defense on May 16, 2002:

That' just the beginning when it comes to Condi Rice's pathetic attempts to clean the historical slate of Bush administration failure. In 2006, Secretary Rice admitted being completely blindsided by the victory of Hamas in Palestinian elections. As the New York Times noted:

"I've asked why nobody saw it coming," Ms. Rice said, speaking of her own staff. "It does say something about us not having a good enough pulse."

On the subject of Iraq and the bogus claims of Saddam Hussein's links to Al Qaeda and the September 11 attacks, Rice's dissembling continues even now. As late as September 2006, Rice insisted "there were ties going on between Al Qaeda and Saddam Hussein's regime." But despite voluminous statements to the contrary by Bush, Cheney and Rice herself, Condi told Charlie Rose in March:

Of course, Republicans' sandblasting of their record extends to domestic policy as well. And on no topic is the GOP do-over more evident than the federal budget deficit and the U.S. national debt.
The Republicans' shameless cynicism was perfectly captured by Vice President Dick Cheney, who in 2002 proclaimed, "Reagan proved deficits don't matter."
Not, that is, if a Republican is in the White House. But when Barack Obama stepped into the Oval Office and the $1.2 trillion deficit George W. Bush left for him there, the GOP quickly changed its tune. While the national debt tripled under Ronald Reagan and doubled again under President Bush, House Minority Leader John Boehner in February decried the $787 billion emergency economic recovery spending as "one big down payment on a new American socialist experiment." By June, Boehner warned of the "crushing debt Washington Democrats are running up." And Senator Judd Gregg (R-NH), Obama's aborted choice for Commerce Secretary, slapped the President last month, "we're basically on the path to a banana-republic-type of financial situation in this country." And, Gregg added:

"You can't keep throwing debt on top of debt."

Obviously, throwing debt on top of debt is precisely what Gregg and his GOP allies have done for over a generation.
On health care, too, Republicans are asking the American people to forget. Forget, that is, that the party that now comically claims to defend the Medicare program used by 46 million seniors is the same GOP which tried to block it in the 1960's and gut it in the 1990's. And as they decry fully funded Democratic health care bills in the House and Senate which would cut the federal budget deficit, they neglect to mention their own support for the deeply flawed and unpaid for 2003 Medicare prescription drug benefit which added hundreds of billions in red ink.
And so it goes. Joining a long and growing list of Republicans, House Minority Whip Eric Cantor (R-VA) this week took credit for stimulus projects funded by the very $787 bullion recovery package he opposed and later called a "dismal failure." As for Sarah Palin, her entire political future is premised on forgetting her past.
At the end of the day, the Republican mantra boils down to this: you can fool some of the people all of the time, and that's our target market. And on this Thanksgiving Day, the Republican Party should be giving thanks that more often than not, it works.

2 comments on “Republicans Give Thanks for Short Memories”