Republicans' Message to Jewish Americans: Everything We Hate is Like the Holocaust 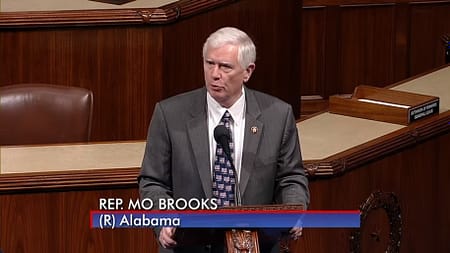 For Republicans, the gathering of the American Israel Public Affairs Committee (AIPAC) has become an annual ritual in their hyperbolic effort to peel away Jewish Americans who overwhelmingly give their votes to Democrats. But the GOP brought an extra sense of urgency to last week's 2019 AIPAC Policy Conference. Less than six months after Democrats captured a staggering 79 percent of the Jewish vote in the 2018 midterms, the Party of Trump had hoped the recent dust-up over comments by Minnesota Democratic Rep. Ilhan Omar would provide the impetus for a so-called "Jexodus."
Now that takes some chutzpah, and not just because it was the casual anti-Semite Donald Trump who issued the geshrai that "the Democrats have very much proven to be anti-Israel" and "frankly, I think they're anti-Jewish." As it turned out, not one but two Republican Congressmen were comparing Democrats to Nazis even as the 18,000 AIPAC attendees were gathered at the convention center just blocks away. And their talking point wasn't a gaffe, but instead the Godwin's Law of the Republican Party. That is to say, the leading lights of the GOP routinely compare anything they don't like--the Trump/Russia investigations, the IRS, the national debt, abortion, gun reform, limits on for-profit colleges, and even the FBI raid on Michael Cohen's office--to the Holocaust.
It was Rep. Mo Brooks of Alabama who performed the rhetorical goose step on the floor of the House this week. Brooks, who previously compared Iran to Nazi Germany and decried the Democrats' "war on whites," slandered the Democratic Party and many in the news media for accusations about Trump's ties to Russia that Attorney General William Barr's summary of the Mueller Report supposedly exposed as "nothing but a big lie." As the Washington Post reported:

Invoking the 10th chapter of the first volume of "Mein Kampf," Brooks explained: "In that vein, I quote from another socialist who mastered big-lie propaganda to a maximum and deadly effect."
He went on: "Quote: 'In the big lie, there is always a certain force of credibility because the broad masses of a nation are always more easily corrupted in the deeper strata of their emotional nature than consciously or voluntarily,'" he said.
With a flourish at the climax of his argument, Brooks declared that the words came from "socialist Adolf Hitler, in his book, 'Mein Kampf.'"

Leaving aside for the moment that no one has seen the actual Mueller Report itself, Brooks' bogus analogy hinges on the fact that the word "socialist" appears in the name of Adolf Hitler's "National Socialist" (Nazi) Party. That Hitler was a fascist who by 1933 had crushed labor unions and banned the Communist Party in Germany is no barrier to those like Brooks and Texas Rep. Louie Gohmert, who traffic in Nazi comparisons.
Of course, those two GOP Godwin gits have plenty of company among the Republicans' best and brightest. Take, for example, former House Speaker and Fox News regular Newt Gingrich.
Continue reading at Daily Kos.