Romney's Financial Ties to Iran, China Back in the News 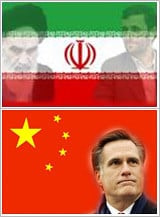 Conservatives on Monday were predictably orgasmic in response to the Washington Post report that Obama campaign adviser David Plouffe earned $100,000 in speaking fees from a firm which did business with Tehran. As it turns out, the Republicans accusing the President of being "soft on Iran" are suffering from a bad case of premature condemnation. After all, revelations regarding Mitt Romney's own ties to Bain business deals with the mullahs in Tehran ended his much-hyped 2007 Iran disinvestment campaign after 24 hours. And in March, Americans learned that Bain Capital, from whom Mitt Romney still earns millions annually, bought the video surveillance division of Chinese company that is a major supplier to the government in Beijing.
As you may recall, ex-Halliburton CEO turned Vice President Dick Cheney was famously dogged by his former company's financial links to Iran. (During his tenure as Halliburton CEO in the 1990's, Cheney strenuously argued against Clinton's sanctions regime because U.S. firms were "cut out of the action" and "the good Lord didn't see fit to always put oil and gas resources where there are democratic governments.") But largely overlooked was Governor Romney's own hypocrisy regarding the Islamic Republic.
Consider Romney's 24 hour Iran disinvestment campaign in early 2007, an effort cut short by revelations his own former employer had recent business dealings with Tehran. Romney followed the lead of his friend and current Israeli Prime Minister Benjamin Netanyahu, who was touring the U.S. calling for pension funds to unload any holdings in companies doing business with Iran. Romney began his own grandstanding on Iranian disinvestment the next month by targeting the Democratic-controlled states of New York and Massachusetts. On February 22, Romney sent letters to then New York Governor Eliot Spitzer, Senators Chuck Schumer and Hillary Clinton as well as state comptroller Thomas P. DiNapoli urging a policy of "strategic disinvestment from companies linked to the Iranian regime."
As it turns out, scrutiny begins at home. As the AP and others detailed, Romney's former employers and colleagues at Bain had links to very recent Iranian business deals:

Romney joined Boston-based Bain & Co., a management consulting firm, in 1978 and worked there until 1984. He was CEO of Bain Capital, a venture capital firm, from 1984 to 1999, despite a two-year return as Bain & Co.'s chief executive officer from 1991 to 1992.
Bain & Co. Italy, described in company literature as "the Italian branch of Bain & Co.," received a $2.3 million contract from the National Iranian Oil Co., in September 2004. Its task was to develop a master plan so NIOC -- the state oil company of Iran -- could become one of the world's top oil companies, according to Iranian and U.S. news accounts of the deal.
Bain Capital, the venture capital firm that Romney started and made him a multimillionaire, teamed up with the Haier Group, a Chinese appliance maker that has a factory in Iran, in an unsuccessful 2005 buyout effort.

Caught flat-footed by his hypocrisy that took the AP less than a day to uncover, Romney feebly responded:

"This is something for now-forward. I wouldn't begin to say that people who, in the past, have been doing business with Iran, are subject to the same scrutiny as that which is going on from a prospective basis."

But that embarrassment didn't prevent Mitt Romney from continuing to profit going forward, this time in China.
In a February op-ed, Romney charged that "President Obama came into office as a near supplicant to Beijing," adding, "his administration demurred from raising issues of human rights." Unfortunately for the former Massachusetts Governor, that tough talk was immediately tempered by word that his financial advisers sold $1.5 million in investments in China last year. And as the New York Times reported in March, Bain's Beijing business didn't end there.
Just days before, Governor Romney warned that "the character of the Chinese government--one that marries aspects of the free market with suppression of political and personal freedom--would become a widespread and disquieting norm." Especially disquieting, it turns out, if Mitt's old colleagues at Bain Capital were complicit in it. Which, as the New York Times detailed, appears to be the case:

In December, a Bain-run fund in which a Romney family blind trust has holdings purchased the video surveillance division of a Chinese company that claims to be the largest supplier to the government's Safe Cities program, a highly advanced monitoring system that allows the authorities to watch over university campuses, hospitals, mosques and movie theaters from centralized command posts.
The Bain-owned company, Uniview Technologies, produces what it calls "infrared antiriot" cameras and software that enable police officials in different jurisdictions to share images in real time through the Internet. Previous projects have included an emergency command center in Tibet that "provides a solid foundation for the maintenance of social stability and the protection of people's peaceful life," according to Uniview's Web site.

"I'm not familiar with that report and so I really can't respond to it," Romney said when asked about the reports of Bain's investments in Uniview Technologies. "Any investments that I make are managed by a blind trust. I don't make investments in Bain or anywhere else. That's done by a trustee who makes decisions that he thinks are correct."

If Mitt Romney's own investments belie his tough talk on China, so do his supporters. In January, Romney-backer David Greenspon, whose Iowa company profits in part by outsourcing manufacturing to China, said as much:

"I think the rhetoric of a campaign is different than the actual application."

That's certainly the case for Mitt Romney and his family.
As Taegan Goddard's Political Wire helpfully recalled today, during his first White House run Romney in 2007 promised "he would shed any investments that conflicted with Republican positions on hot-button domestic and foreign policy issues." But as the AP reported earlier this year, "Romney's family trusts kept some of those holdings and repeatedly bought new ones until 2010, when they were finally sold off for more than $3 million."

Recently disclosed tax returns for three family trust funds for Romney, his wife, Ann, and their adult children show scores of trades in companies whose business operations are inconsistent with Republican Party stances that Romney favors on Iran, China, stem cell research, abortion and other issues.
The continual trading between 2006 and 2010 raises questions about why the investments continued for three years, even after Romney said in 2007 that the trust would sell off any conflicted holdings. Those trades came during a period when Romney has sought to convince voters of his conservative Republican values. The trades also raise questions about whether any of the transactions were vetted for possible conflicts or political perception before they were made.

In response to the report linking David Plouffe to the South African firm MTN prior to joining the White House staff, Mark Wallace, the chief executive of United Against Nuclear Iran, said Sunday: "MTN was a charter member of UANI's target list -- the Iran Business Registry -- launched in 2009. We hope Mr. Plouffe will use his considerable influence to urge President Obama to enact a full economic blockade of Iran so that companies like MTN will no longer be able to operate there." As the Washington Post reminded readers, over-excited Republican partisans should soon be deflated:

The registry, which UANI says has been online since 2009, lists many other companies active in Iran, including Marriott, where Romney served on the board until early 2011.