Sadly for Republicans, the Stimulus Stimulated 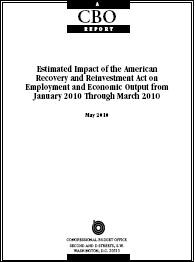 "You can fool some of the people some of the time, and that's our target market." Judging from the rhetoric of House Minority Leader John Boehner, that's the Republican mantra when it comes to the Obama recovery package. Nine months after Boehner wrongly decried a "stimulus bill that didn't create any jobs," his web site crowed about a Pew Research Survey showing "Nearly two-thirds of Americans do not believe the $787 billion stimulus package the president passed last year has helped create jobs." Unfortunately for John Boehner and the myth-makers of the GOP, the numbers show not only that the stimulus stimulated, but, as the Wall Street Journal acknowledged, the "economic effect of the stimulus [was] bigger than projected."
That's the word from the Congressional Budget Office (CBO). The inescapable conclusion of the program's success is detailed in the CBO's assessment of American Recovery and Reinvestment Act (ARRA) for the first quarter of 2010. As the Journal summed it up:

The $800 billion U.S. stimulus package has had a slightly bigger effect on the U.S. economy than was projected when it was passed more than a year ago, the Congressional Budget Office estimated Tuesday.
Through the first quarter of 2010, the stimulus boosted employment by an estimated 1.3 million to 2.8 million jobs, about a quarter or half million more than projected. Gross domestic product was 1.7 to 4.1 percentage points higher than it would have been without the stimulus, the nonpartisan budget office said.

Harkening back to President Obama's promise that ARRA would save or create 3.5 million jobs, the CBO projects that as many as "3.7 million American jobs could be attributed to the Recovery Act by the end of the September." As the Washington Monthly's Steve Benen put it, "There's a word to describe a recovery effort like this: success."
If this story sounds familiar, it should.
Back in February, the CBO reported similarly impressive numbers for the fourth quarter of 2009. In response, former McCain economic adviser Mark Zandi reflected the overwhelming consensus of economists that "the stimulus did what it was supposed to do: short-circuit the recession and spur recovery."
Writing in the New York Times, David Leonhardt then offered a revealing thought exercise. "Imagine," Leonhardt asked, "if one year ago, Congress had passed a stimulus bill that really worked...what would the economy look like today?" His answer:

Well, it would look almost exactly as it does now. Because those nice descriptions of the stimulus that I just gave aren't hypothetical. They are descriptions of the actual bill.
Just look at the outside evaluations of the stimulus. Perhaps the best-known economic research firms are IHS Global Insight, Macroeconomic Advisers and Moody's Economy.com. They all estimate that the bill has added 1.6 million to 1.8 million jobs so far and that its ultimate impact will be roughly 2.5 million jobs. The Congressional Budget Office, an independent agency, considers these estimates to be conservative.

But in words that doubtless warmed Republican hearts, Leonhardt concluded, "Yet I'm guessing you don't think of the stimulus bill as a big success." And that's doubtless true. Despite the overwhelming evidence to the contrary, polls from Pew and CNN show that a majority of Americans believe the stimulus is a failure.
Ironically, one who doesn't is John Boehner. Despite his repeated proclamations that the Obama recovery program didn't "create a single job," Boehner is one of over 110 Republican members of Congress taking credit for the stimulus funds they opposed. In June, he praised the Obama administration for ordering the Ohio Department of Transportation to redirect federal stimulus funds to "create much need jobs:"

"I'm pleased that federal officials stepped in to order Ohio to use all of its construction dollars for shovel-ready projects that will create much-needed jobs."

Despite the obvious public relations success of their stimulus distortions, the numbers show that John Boehner's Republicans are once again falling victim to another mantra. This one comes from Stephen Colbert. "Reality," Colbert said, "has a well-known liberal bias."