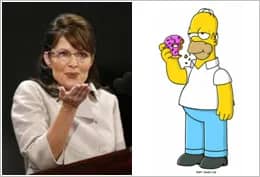 In a 1999 episode of "The Simpsons," theoretical physicist and cosmologist Stephen Hawking says to Homer, "Your theory of a donut shaped universe intrigues me." Sadly, the same can't be said of Sarah Palin's call for a donut-based economy for the United States.
Palin's boost for the American breakfast snack sector came in her jaw-dropping response to President Obama's State of the Union rallying cry of a "Sputnik moment" for this generation of Americans. But Palin wasn't content to mangle the history of the Cold War in declaring the Soviet Union won the space race. The key to producing large numbers of good paying jobs lay not in harnessing the opportunities in renewable energy, high-efficiency vehicles, biotechnology or mobile communications, Palin told Greta Van Susteren on Wednesday, but in harnessing the power of the potato:

So I listened to that Sputnik moment talk over and over again, and I think, No, we don't need one of those. You know what we need is a "Spudnut" moment. And here's where I'm going with this, Greta. And you're a good one because you're one of those reporters who actually gets out there in the communities, find these hard-working people and find solutions to the problems that Americans face.
Well, the Spudnut shop in Richland, Washington -- it's a bakery, it's a little coffee shop that's so successful, 60-some years, generation to generation, a family-owned business not looking for government to bail them out and to make their decisions for them. It's just hard-working, patriotic Americans in this shop.
We need more Spudnut moments in America.

But despite the side-splitting laughter which ensued, on Friday Sarah Palin doubled-down on her donut-centric vision for expanding Americans' waistlines, if not their economic prospects. As she wrote in "On Sputnik vs. Spudnut":

If you're near Richland, WA, you should stop by The Spudnut Shop, where you'll find an all-American success story of a family owned small business that for over 60 years has been serving up a product that people want to buy. Businesses like this coffee shop don't receive big government bailouts. They produce something with their own ingenuity and hard work. And here we see the former communist Soviet Union's advancement (before its government debt-ridden demise) vs. America's small businesses that are the backbone of our economy.
We'd be better off if we had a greater appreciation for the free market ingenuity of ordinary American entrepreneurs, both great and small - whether they make high-tech gadgets or potato donuts. And this goes for all our small business owners - whether they run a family farm, a commercial salmon fishing business, an auto shop, a print shop, a consulting firm, a restaurant, you name it. Our government should show them more respect by not punishing their success and limiting their ability to hire more people by over-taxing and over-reaching into their businesses. Don't stifle their growth with burdensome regulations like Obamacare and cap-and-tax. Government should be on their side, not in their way.

Leave aside for the moment Palin's decision to highlight low wage food service jobs as the future for American workers. (In 2009, the Bureau of Labor Statistics reported that among the 11.2 million people working in food preparation and service, the 491,000 toiling as "Counter Attendants, Cafeteria, Food Concession, and Coffee Shop" earned $9.13 hourly and an average annual income of $18,990.) An even greater embarrassment for the half-term governor was delivered by a reader of Andrew Sullivan's Daily Dish blog:

The Spudnut shop Palin speaks of is half a mile from my house in Richland, WA and it's really good (the secret is potato flour in the batter). She may not realize that the federal government buys most of those doughnuts: the annual budget for cleanup of the nearby Hanford Nuclear Reservation is more than $2 billion, employing about 11,000 workers, and spudnuts are the pastry of choice at meetings there.

Of course, this kind of irony is nothing new for Palin. On the day she resigned her post, Governor Palin warned Alaskans, "We can resist enslavement to big central government that crushes hope and opportunity. Be wary of accepting government largesse; it doesn't come free." As it turns out, Palin's home state is among the greatest beneficiaries of red state socialism. Alaska ranked third in feeding at the federal trough, taking in $1.84 from Washington DC for each dollar sent there. And that spring, Palin's North Star led the nation in per capita earmarks received.
Despite Sarah Palin's myth-making, far from creating burdens for small business owners, President Obama has lavished economic incentives on them to expand investment and hiring. Even before December's tax deal with Republicans, Barack Obama with the American Recovery and Reinvestment Act had already delivered the largest two-year tax cut in American history. President Obama not only signed 8 small business tax cuts into law, he also prodded Congress to produce the Small Business Jobs Act. Last month's tax cut deal Obama brokered with Republicans allows businesses to write off 100% of the cost of equipment purchases. And the Affordable Care Act so derided by Palin is already delivering benefits to small businesses: insurers are reporting significant jumps in coverage thanks to incentives to give health benefits to their employees.
And Sarah Palin was against all of it.
As it turns out, the donut-eating Homer Simpson is not just the embodiment of Sarah Palin's "Spudnut economy." He could be the poster boy for Palin's campaign against the socialist, anti-obesity agenda of First Lady Michelle Obama. ("Where are the s'mores ingredients? This is in honor of Michelle Obama, who said the other day we should not have dessert.") In the 2007 Simpsons Movie, Homer and the family flee Springfield for the friendlier confines of Alaska:

On so many levels, Sarah Palin's "Spudnut moment" for the American economy is shared by Homer Simpson. As he once put it, "Donuts, is there anything they can't do?"