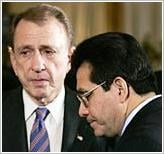 This week, Senator Arlen Specter offered his latest performance as Hamlet in the unfolding Alberto Gonzales drama. Just one day after essentially accusing Gonzales of perjury before the Senate Judiciary Committee, Specter once again backed away from taking action against the Bush administration and instead criticized his Democratic colleagues for "playing politics." As I've written before ("Specter's Failure to Launch"), Specter like Shakespeare's Danish prince simply can't bring himself to avenge the crimes of his king.
Something certainly is rotten in the Bush White House. During his testimony on Wednesday, Attorney General Gonzales contradicted his previous statements that there was no disagreement within the Bush administration about the NSA domestic surveillance program and that his 2004 bedside visit to John Ashcroft concerned the same spying program publicly confirmed by President Bush. Instead, Gonzales now claims that he was discussing "other intelligence activities," a statement rejected under oath by former Deputy Attorney General James Comey and just yesterday by FBI Director Robert Mueller. This latest lie to Congress, combined with his repeated cries of "I am recused" and incoherent suggestions that U.S. attorneys were purged "for cause," only served to invite action against Gonzales.
And on Wednesday, Specter seemed to agree. An indignant Arlen raged at Gonzales:

"Is your department functioning? Do you review these matters? How many matters are there which do not come to our attention because you don't tell us and the newspapers don't disclose them?"

After hearing Gonzales contradict himself regarding the so-called "other intelligence activities" at the heart of the Ashcroft matter, Specter exploded again:

"Mr. Attorney General, do you expect us to believe that?"

Alas, that was just for show. On Thursday, traveling aboard Air Force One with President Bush, Specter sang a different tune. When Democratic Senators Schumer, Feinstein, Feingold and Whitehouse called on Solicitor General Paul Clement to name a special counsel to investigate Gonzales, Specter labeled the move "a great fundraising device for the Democratic Party." He then slandered his Judiciary Committee colleague Charles Schumer of New York for "playing politics." Specter similarly backed away from the subpoenas for Karl Rove and his aide Scott Jennings to appear before the Committee, hoping to avoid confrontation with the White House.
On issue after issue, Specter speaks of the evils of President Bush, but cannot bring himself to act. Illegal domestic surveillance of Americans, the end of habeas corpus, politically motivated firings of United States prosecutors and unprecedented presidential signing statements all bring cries of anguish from Senator Specter. But like Hamlet, torn and tormented by duty unfulfilled, he cannot do what he knows he must.
As Specter equivocated, the U.S Constitution was being killed in a "murder most foul." But rather than challenge the usurper, Specter merely moves from one soliloquy to the next, "to sleep, perchance to dream."
In the end, of course, Hamlet did his filial duty and killed Claudius, exacting his revenge. But Arlen Specter, ever mindful of the workings of the Bush White House, no doubt recalls that the tragic Hamlet died in the attempt.
For more on the tragi-comedy that is Arlen Specter, see: