Days after the nonpartisan Congressional Budget Office (CBO) released its latest projections House Republicans on Friday announced their latest ransom demand for raising the debt ceiling. John Boehner's minions will vote to avoid a U.S. default and a global economic calamity if the Medicare "doc" fix is patched for nine months and cuts to veterans' pensions are restored. But to get a one-year debt limit increase, the extra costs Republicans would incur must be offset "by an extra year of cuts to mandatory spending and changes to pension contributions."
President Obama and his Democratic allies in Congress should just say no. After all, Speaker Boehner and Senate Minority Leader Mitch McConnell gave President George W. Bush a "clean," no-strings attached debt ceiling increase. And as it turns out, federal spending has declined and Uncle Sam's annual budget deficits has been halved since Barack Obama first took the oath of office on January 20, 2009. 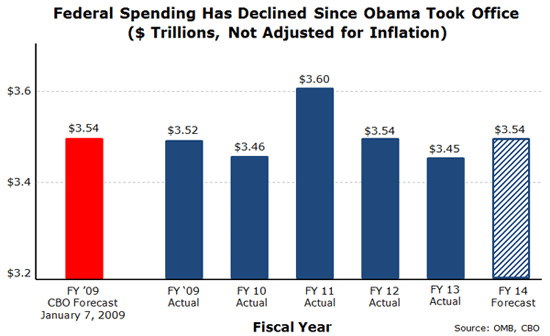 On January 7, 2009, CNN reported on the latest long-term budget forecast from the CBO. Two weeks before President Bush ambled out of the Oval Office, CNN explained "the U.S. budget deficit in 2009 is projected to spike to a record $1.2 trillion, or 8.3% of gross domestic product." With the recession in full swing and the massive TARP program passed the previous fall, CBO predicted in January 2009 that federal spending would spike to $3.543 trillion dollars while tax revenue would plummet to an anemic to $2,357 trillion. As it turned out, the final deficit figure for the 2009 fiscal year which ended on September 30, 2009 reached $1.413 trillion because of worse-than-expected tax collections ($2,105 trillion.)
But as the CBO reported in its new 2014 budget forecast this week, the budget picture has improved dramatically since then.
As the chart above shows, federal spending is lower now than on President Obama's first day in office. Aside from a small tick up for stimulus spending in FY 2011, outlays have dropped since. Fiscal year 2013 (which concluded last September 30) saw spending to $3.45 trillion. FY 2014 is forecast to edge up to $3.54 trillion, the same level as in FY 2009. Importantly, these figures do not take inflation into account. In real terms, federal spending is now less than it was five years ago.
As the chart below shows, Uncle Sam has also staunched the flow of red ink as well. The shortfall for FY was $680 billion, less than half its 2009 level. For the next few years, the federal government's annual deficits will be at or below the four-decade historical average of around 3 percent of GDP. 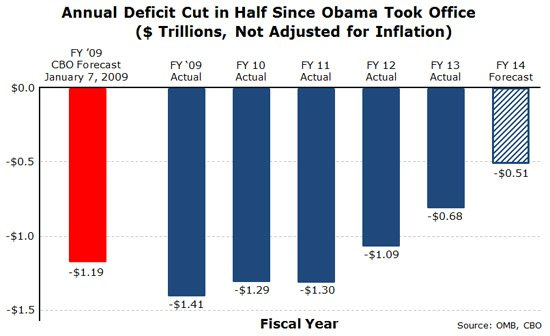 Nevertheless, Rep. Cathy McMorris Rodgers used her GOP State of the Union rebuttal to warn that the President was "making their lives harder with unprecedented spending." And with Friday's disappointing January jobs report, Speaker Boehner charged, "The American people continue to ask 'where are the jobs?,' and the president clearly has no answers."
But with his proposals for infrastructure investment, aid to the states and continued assistance to the long-term unemployed, President Obama has provided answers. Yet in Washington, Republicans newly concerned about the national debt slashed non-defense discretionary spending (that is, everything outside of the military, Social Security, Medicare, Medicaid and interest on the national debt) to its lowest share of GDP since the 1950's. Meanwhile in the states, GOP-controlled governors' mansions and legislatures enacted draconian austerity programs that slashed over 750,000 jobs since 2009.

The result is that the American public sector at the federal, state and local levels combined has fewer workers than it did in 2006. While the private sector has added a net of 3.5 million jobs since Barack Obama was first inaugurated, government at all levels shed three-quarters of a million workers.
Sadly, the job losses hardly ended there.

The multiplier effect of lost consumer spending battered the private sector as well. In May, the Hamilton Project estimated that austerity at the state and local level cost the U.S. economy 2.2 million jobs. In April 2012, the Economic Policy Institute (EPI) explained why:

If public-sector employment had grown since June 2009 by the average amount it grew in the three previous recoveries (2.8 percent) instead of shrinking by 2.5 percent, there would be 1.2 million more public-sector jobs in the U.S. economy today. In addition, these extra public-sector jobs would have helped preserve about 500,000 private-sector jobs.

Meanwhile back in Capitol Hill, Republicans are once again loading rounds into the debt ceiling pistol pointed at the American economy. As an aide to Alabama GOP Senator Jeff Sessions put it, "Sen. Sessions is extremely concerned about our nation's debt and opposes authorizing increased debt without meaningful reforms to Washington spending levels."
But as the data show, Uncle Sam doesn't have a spending or deficit problem right. The United States needs faster economic growth and more (and higher paying) jobs. That means spending more--not less. And the sooner Congress lets President Obama address the real issue, the better we'll all be.