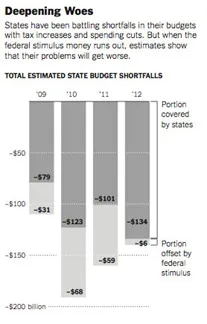 As all eyes remained focused on the union-busting face-off in Wisconsin, the Commerce Department on Friday released a revised estimate of U.S. economic growth for the last quarter of 2010. And that downward GDP revision not only shatters prevailing myths about supposedly bloated government spending and payrolls. The numbers confirm once again that budget cutters in states and cities across the country are indeed the "anti-stimulus" putting the pace of American economic recovery at risk.
This week, the government restated its estimate of Q4 growth, lowering its forecast from 3.2% to 2.8%. The disappointing news from the Bureau of Economic Analysis can be attributed in large part to the very bad news from state and local governments. As the AP explained:

As the National Governors Association meets this weekend, "the financial emergencies -- and what to do about them -- will be issue No. 1." Even with state and local tax revenues finally on the upswing, the worst may still be to come:

Economists predict they will slash their budgets by up to 2.5 percent this year - potentially the sharpest reduction since 1943. The deepest cuts are expected to occur in the first six months of this year.
The worst cuts so far - 3.8 percent - came in the January-to-March period of 2010. That was the sharpest quarterly drop since late 1983, when the U.S. economy was recovering from a severe recession. Most economists think the cutbacks this year will exert an even bigger economic drag than last year.

In the span of just a few days in December, the Washington Post, the New York Times, Reuters, Bloomberg and the Wall Street Journal described the fiscal triple-whammy facing the states. Even with spending now well below 2008 levels, the downturn-induced drop in revenues and increased demand for social services coupled with the looming end of the American Recovery and Reinvestment Act (ARRA) is producing yawning gaps in state budgets. And the states, all but one of which must balance budget each year, are responding with sharp spending cuts, massive layoffs and deferred payments to state employee pension funds.
The result is that the Republican myth about the out-of-control expansion of the government work force is just that - a myth. In December, former Minnesota Governor and White House hopeful Tim Pawlenty wrongly claimed, "Since January 2008 the private sector has lost nearly eight million jobs while local, state and federal governments added 590,000." (Two weeks ago, House Speaker John Boehner offered his fraud on the subject, falsely declaring, "Since President Obama has taken office, the federal government has added 200,000 new federal jobs.") As Paul Krugman showed in one simple chart, with the exception of the brief jump to conduct the 2010 U.S. Census, overall employment at the federal, state and local level is now lower than when the Bush recession began in December 2007: 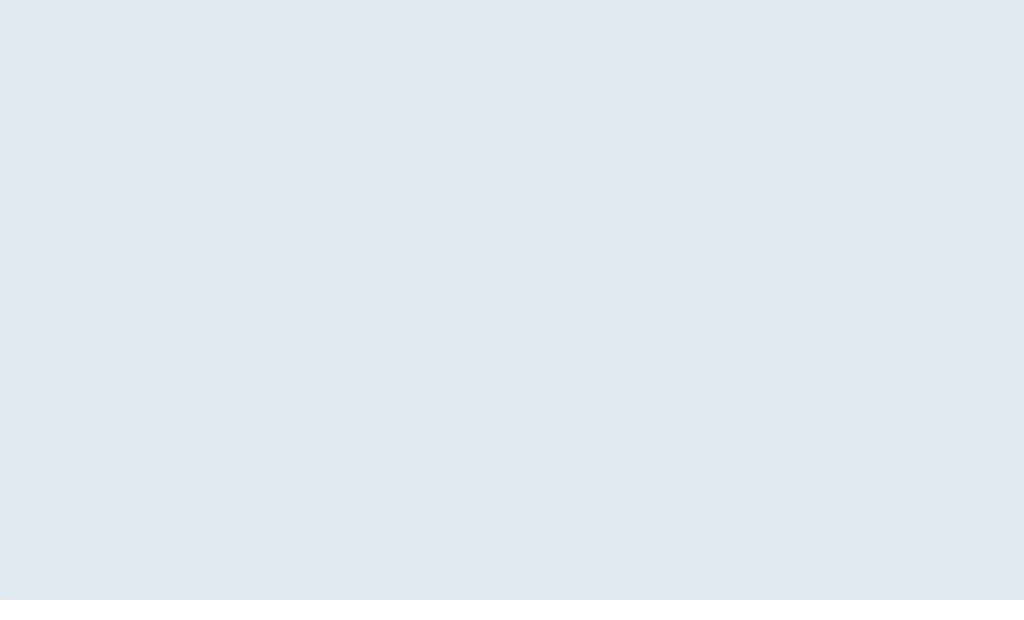 Even with the meager hiring by the federal government, Washington's civilian workforce as share of U.S. population is lower than during the Eisenhower administration. And as David Leonhardt explained in the New York Times this week:

The mid-2010 spike in government employment is the temporary hiring -- and then letting go -- of Census workers. Ignore those temporary Census jobs, and government employment has been falling gradually and fairly steadily over the last two years. State and local cuts have more than made up for a modest amount of net federal hiring, mostly for national security jobs.
It's hard to look at these numbers and believe that the laying off of more government workers will somehow cure the economy's troubles.

Sadly, the scope of the crisis - and the threat to the American recovery - has been evident for months. Economist Stephen Gordon warned in June that "that total government spending has been a drag on growth over the past two quarters" because "the increases at the federal level have not been enough to compensate for the spending cuts at the local and state levels." By October, as Leonhardt summed it up in the New York Times:

Local governments are cutting jobs at the fastest rate in almost 30 years.
They cut 76,000 jobs last month and over the last three months have cut 143,000 jobs, many in education, according to today's jobs report. That's 1 percent of total local-government employment across the country. Since the Labor Department began keeping records in the 1950s, the only other time that the cuts were so steep was in the harsh 1981-2 recession.

By November, state and local governments had shed 407,000 jobs (-39,000 state, -368,000 local) since their peak in August 2008. With state budget shortfalls estimated to top $100 billion for each of the next two years, analysts including Moody's Economics and the Center on Budget and Policy Priorities have forecast more state and local job losses reaching between 400,000 and 900,000.

It was that dismal reality in the states which led Ezra Klein to declare them the "anti-stimulus" last fall:

The government is now impeding an economic recovery. But it's not for the reasons you often hear. It's not because of debt or because of taxes. Nor has it scared the private sector into timidity. It's because, at the state and local level, it's firing people. There are more than 14 million Americans looking for work right now -- to say nothing of the 9.5 million who have been forced into part-time jobs when they want, and need, full-time work -- and the government just added 159,000 more to the pool. Consider this: If we only counted private-sector jobs, we'd have had positive jobs reports for the last nine months. As it is, public-sector losses have wiped out private-sector gains for the past four months.

In December, both the National Conference of State Legislatures and the National Governors Association sounded the alarm that worse was still to come. In its report, the NGA described a $65 billion "cliff" facing the states despite further cuts already made this year:

Even with state and local government revenue finally starting to increase with the improving economy, as the Wall Street Journal noted, "states are likely to seek fresh cuts or new taxes to bridge the gap." Why? Because of the nearly $40 billion falloff in federal stimulus aid starting in July. As budget analyst Arturo Perez of the National Conference of State Legislatures put it:

"Although revenue is improving, it's not enough to offset the loss of federal dollars."

And as the New York Times noted last week, "So many people now receive jobless benefits that 30 states have run out of their unemployment trust funds and are borrowing $42 billion from the federal government." Which is why President Obama's budget is proposing short-term relief to states "saddled with unemployment insurance debt, coupled with a delayed increase in the income level used to tax employers for the aid to the jobless."
Republicans in Congress, of course, are against all of it. Hoping to punish Democratic-voting states and their public employee unions, GOP leaders have urged legislation to enable state and local governments to declare bankruptcy. As House Budget Committee chairman Paul Ryan put it, "We are not interested in a bailout."
Meanwhile, the federal stimulus program pushed by President Obama and his Democratic allies continues to pay dividends. (Despite their complete opposition, Republicans are now trying to claim credit for the growing recovery it produced.) Over the past year, the U.S. economy added 1.1 million new jobs overall, including 1.3 million in the private sector, which enjoyed 12 straight months of growth. This week, the nonpartisan Congressional Budget Office (CBO) estimated the Obama stimulus program had saved or created up to 3.5 million jobs, lowered the unemployment rate by as much as 1.9% and boosted GDP by 4.1%. A recent analysis of Census data by the Center on Budget and Policy Priorities (CBPP) revealed that federal programs kept 4.5 million Americans out of poverty in 2009. For his part, former John McCain adviser Mark Zandi in August concluded that the combined federal interventions beginning in the fall of 2008 prevented the Great Recession from becoming Depression 2.0. Looking at future quarterly growth rates now expected to top 3.2%, an upbeat Zandi announced in January:

But among the potential barriers that take off is the dismal financial condition of states, cities and towns across America. . In the Washington Post, Ezra Klein asked and answered, "Who is holding the economy back?"

Watching the states slash their budgets and Congress talk about how much it can cut during the remainder of 2011, it seems certain that government spending cuts, at least, will continue to be a drag on the economy through the rest of the year.

Surveying the data for the past year and the grim future fiscal landscape, Derek Thompson of The Atlantic warned:

NOTE: This week, Goldman Sachs warned that budget cuts proposed by House Republicans would create a drag on the economy. For a glimpse at the Republicans' vision of the economic future, Americans need only look at the impact of austerity policies in the UK and Germany now. This week, the British government also published a downward revision of its fourth quarter GDP, which contracted at a larger than expected 0.6%.