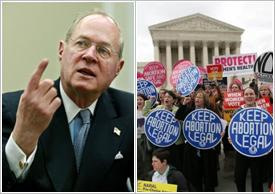 In one of the most condescending and paternalistic Supreme Court opinions in recent memory, Justice Anthony Kennedy in April 2007 upheld a federal late term abortion ban on the grounds that "some women come to regret their choice." 18 months later, an exhaustive study of 20 years of research concluded that there is no evidence to support the mythical "post-abortion syndrome" hyped by anti-abortion forces - and regurgitated by Justice Kennedy in Gonzales v. Carhart. And now, a new analysis has demolished 2009 "research" which posited a link between abortion and subsequent mental health problems for women.
Julia Steinberg of the University of California at San Francisco and Lawrence Finer of the Guttmacher Institute found that:

The findings of a 2009 study by Priscilla Coleman et al--which claimed that women who had reported an abortion were at an increased risk of several anxiety, mood and substance use disorders, compared with women who had never had an abortion--are not replicable.

Steinberg and Finer's analysis, just published online in Social Science & Medicine, examined the same dataset as Coleman et al. (the National Comorbidity Survey) and found that in every case, the proportions of women experiencing mental health problems reported by Coleman were much larger, sometimes more than five times as large, as Steinberg and Finer's results. The Coleman findings were also inconsistent with several other published studies using the same dataset and sample.

"We were unable to reproduce the most basic tabulations of Coleman and colleagues," Steinberg noted, concluding, "This suggests that their results are substantially inflated." And the Coleman findings, Steinberg pointed out, "were logically inconsistent with other published research."
Like the massive study from Johns Hopkins two years ago. That research reviewed 21 studies involving 150,000 women. The team's systematic analysis of the highest quality studies in terms of methodology showed "few, if any, differences between women who had abortions and their respective comparison groups in terms of mental health." In contrast, only the studies with "studies with the most flawed methodology" found any negative long-term, mental health impact.
In its report, the researchers pointed out that, "the U.S. Supreme Court, while noting that 'we find no reliable data to measure the phenomenon,' cited adverse mental health outcomes for women as part of the rationale for limiting late term abortions." It is Justice Kennedy's dependence on his unproven claim of post-abortion syndrome that the Johns Hopkins team concluded today was wholly without foundation:

"The best research does not support the existence of a 'post-abortion syndrome' similar to post-traumatic stress disorder," Dr. Robert Blum, who led the study published in the journal Contraception, said in a statement.

Sadly, distorting science to advance a political agenda perfectly describes Justice Kennedy's jaw-dropping Carhart opinion. Reversing the Court's position on so-called partial birth abortion just seven years after it struck down a similar Nebraska law, Kennedy swept away Justice Breyer's previous exception for "for the preservation of the...health of the mother." Derisively referring to physicians as "abortion doctors" and with callous disregard for the health of American women, Kennedy in the 5-4 majority opinion decreed that father knows best. (His 2000 dissent in Stenberg v. Carhart used the incendiary term "abortionist" no fewer than 13 times.) As the Washington Post's Ruth Marcus recalled:

"Respect for human life finds an ultimate expression in the bond of love the mother has for her child," Kennedy intoned. This is one of those sentences about women's essential natures that are invariably followed by an explanation of why the right at stake needs to be limited. For the woman's own good, of course.

Kennedy continues: "While we find no reliable data to measure the phenomenon, it seems unexceptionable to conclude some women come to regret their choice to abort the infant life they once created and sustained." No reliable data? No problem!

The State has "ethical and moral concerns that justify a special prohibition," Kennedy argued, because "it is self-evident that a mother who comes to regret her choice to abort must struggle with grief more anguished and sorrow more profound when she learns" the details of the abortion procedure.
As Marcus suggests, Kennedy's mantra of "no data, no problem" was never justifiable as a matter of either law or science, and to be sure, is no longer operative. Unfortunately, that comes too late for the reproductive rights of American women.
In the wake of their victories with so-called partial birth abortion laws and the Unborn Victims of Violence Act, abortion foes continue to push legislation advancing pseudo-scientific (and unsubstantiated) claims about "fetal pain" and as well as so-called "post-abortion syndrome." As the AP reported two weeks ago, abortion opponents are pushing lawmakers in Kansas, Maryland and Oklahoma to emulate a Nebraska law which "outlaws abortion after 20 weeks of pregnancy based on the disputed claim that fetuses can feel pain after that point." Other states look to enact fraudulent health warnings and burdensome new regulations on the operation of family planning centers, laws which have left the entire state of Mississippi with a single abortion clinic. And four states - Alabama, Louisiana, Mississippi, and Oklahoma - now needlessly require mandatory ultrasound procedures for all women seeking an abortion. Only the 2008 Election Day defeats of the McCain/Palin ticket and draconian abortion restrictions on the ballot in South Dakota, Colorado and California prevented a further abrogation of women's reproductive rights that might have taken a generation to undo. As the New York Times detailed, those setbacks will be no barrier to a renewed anti-abortion crusade by the new Republican majority in the House.
The latest research shows that once again the enemies of reproductive freedom for American women do not have science on their side. Sadly, Justice Anthony Kennedy is another matter.