Just before November's midterm elections, a piece called "Divide, Suppress and Conquer" described the two-pronged Republican campaign strategy of mobilizing its conservative base while driving down the Democratic and independent vote. When it comes to vote suppression, a new study has found that the Republican tactics have been quite successful, indeed. 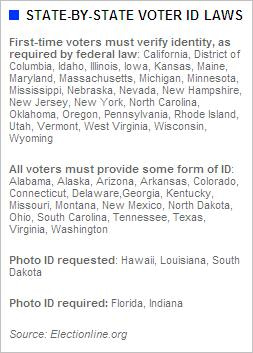 In a report just presented to the U.S. Election Assistance Commission, the Eagleton Institute of Politics at Rutgers University showed the impact of draconian new state voter identification laws. Data from 2004 revealed that states requiring that voters sign their name or produce ID documentation suffered a 4% drop in turnout. The impact was greatest among minority voters, with the vote of Hispanic voters down by 10% and that of African-Americans trimmed by 6%. As Kimball Brace of Election Data Services summarized the results, "It validates some of the things that have been said all along about the problems of voter ID."
Which is just what the doctor ordered for the Republican Party. As Perrspectives detailed in November, in recent years the GOP at the state and federal level has been moving to discourage voter participation outside its base. Through tougher voter registration processes, restrictive voter ID programs, unprecedented redistricting, and election day intimidation, the Republicans seek to produce reliably "red" outcomes at the ballot box. For black and Hispanic voters, who in 2006 voted for Democrats by 89% and 69% respectively, the new restrictions are operating just as the GOP intended. (For the details on these efforts, see "Divide, Suppress and Conquer.")
The new Eagleton Study also supported the findings of a 2006 report that concluded there was little evidence of voter fraud at polling places. That May 2006 study for the U.S. Election Assistance Commission definitely refuted the voter fraud myth perpetuated by Republicans. That report concluded, "There is widespread but not unanimous agreement that there is little polling place fraud, or at least much less than is claimed, including voter impersonation, 'dead' voters, noncitizen voting and felon voters."
It is worth noting that the Eagleton study on provisional voting and voter identification did not examine results from election 2006, which occurred after several states enacted new voter ID measures. (Not surprisingly, virtually all of the states featuring the most restrictive ID requirements voted for George W. Bush in 2004.) While Georgia and Missouri had their new ID card programs blocked by the courts, Indiana did move forward with its own and enjoyed a 2% increase in overall turnout. As Indiana Secretary of State Todd Rokita, a Republican, disingenuously put it, "we could not find one instance where a legitimate voter could not vote."
That is, after all, exactly the GOP strategy. In voting as in so many other areas of American life, the Republicans will tell us who is "legitimate."