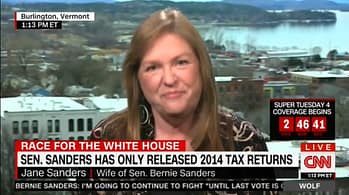 Among Bernie Sanders' greatest strengths is his old-fashioned honesty. That's why it's so puzzling that he would only release one year of tax returns. After all, most presidential candidates publish many years of their tax records. (Across all of their elections, Hillary and Bill Clinton combined have now made 38 years available.) In any event, given their comparatively modest lifestyles, few expect any wrongdoing or grotesque hypocrisy in Jane and Bernie Sanders' IRS paperwork.
That's why Jane Sanders' insistence on a quid pro quo on Tuesday is so disappointing. By demanding that Clinton release her Wall Street speech transcripts as a condition of releasing more tax returns, Jane and Bernie Sanders are sounding more like Ann and Mitt Romney.
As Politico reported, Mrs. Sanders proposed that swap during an interview with CNN's Wolf Blitzer:

CNN's Wolf Blitzer asked Sanders about when she might release her husband's old tax returns, as the senator from Vermont has said his wife prepares them each year.
"He's counting on you to release them. You did release the 2014 tax returns. What about earlier years? How's that looking?" Blitzer said.
"You know, what's interesting is we released the 2014," Sanders said. "Hillary Clinton hasn't released a transcript yet."
She then confirmed that she'll provide the returns when Clinton publishes her Wall Street transcripts, before trying to turn the interview away from the topic.

If that formula sounds nauseatingly familiar, it should.
2012 Republican nominee Mitt Romney, after all, chose not to follow in the footsteps of his beloved father George, who released 12 years of returns for his 1968 presidential run. Hoping to secure the VP slot on the 2008 ticket, the self-funding former Massachusetts Governor turned over 23 years of returns to John McCain's vetting team. But for his 2012 run, Governor Romney initially refused to publicly release any at all, telling CNN's Wolf Blitzer in December 2011:

"I don't put out which tooth paste I use either. It's not that I have something to hide."

The person with something to hide, the Romney Clan suggested, was President Obama. Son Matt got laughs from New Hampshire Republicans in late 2011 when he brushed off requests for his father's secret tax returns this way:

"I heard someone suggest the other day that as soon as President Obama releases his grades and birth certificate ...then maybe he'll do it."

But when Governor Romney finally buckled to public pressure and made his 2009 and 2010 filings public, Americans learned that the Quarter Billion Dollar Man paid a tax rate of less than 15 percent--less than what many middle class families owe to Uncle Sam. As I noted in July 2012, there was no mystery as to why "he hasn't been paying taxes we would expect him to pay":

That paltry figure is made possible by the notorious "carried interest" exemption for private equity managers Romney wants to preserve [which] taxes him not at the ordinary income rate of 35 percent but instead at the capital gains rate of just 15 percent. (Thanks to his unusual golden parachute, most of Mitt's millions each year come from his controversial former employer, Bain Capital.) On top of his Cayman Island investments and past Swiss bank accounts, Romney has created a $100 million trust fund for his sons - tax free. Thanks to some (apparently legal) chicanery on the part of his former employer, Mitt has also accumulated an IRA worth a reported $100 million. (The Romney camp even complained about that, worrying that recent tax code changes had "created a tax problem" for the former Massachusetts governor and asking, "Who wants to have $100 million in an IRA?")

To be sure, Mr. and Mrs. Romney weren't happy about fielding questions on any of these topics. In January 2012, Ann Romney lamented that "unfortunately" the world now knows how "successful in business" her husband had been. But by that August, Rafalca's mom had enough of "you people," declaring "the more we release, the more we get attacked, the more we get questioned, the more we get pushed. And so we have done what's legally required, and there's going to be no more tax releases given." Mitt agreed, telling the National Review:

"In the political environment that exists today, the opposition research of the Obama campaign is looking for anything they can use to distract from the failure of the president to reignite our economy...I'm simply not enthusiastic about giving them hundreds or thousands of more pages to pick through, distort and lie about."

Instead, Romney's retained the right to distort and lie about his own taxes. For starters, he repeatedly claimed that his total tax rate "is really closer to 45 or 50 percent":

"Well, actually, I released two years of taxes and I think the average is almost 15 percent. And then also, on top of that, I gave another more 15 percent to charity. When you add it together with all of the taxes and the charity, particularly in the last year, I think it reaches almost 40 percent that I gave back to the community. One of the reasons why we have a lower tax rate on capital gains is because capital gains are also being taxed at the corporate level. So as businesses earn profits, that's taxed at 35 percent, then as they distribute those profits as dividends, that's taxed at 15 percent more. So, all total, the tax rate is really closer to 45 or 50 percent."

Now, the Internal Revenue Service and most Americans certainly would not consider their charitable giving part of what they pay to Uncle Sam. Most would probably admit that their contributions to their church is not synonymous with "giving back to the community." Especially when that tithing takes the form of tax deductible stock. As ABC News documented in early 2012, "the private equity giant once run by the GOP presidential frontrunner carved his church a slice of several of its most lucrative business deals, securities records show, providing it with millions of dollars-worth of stock in some of Bain Capital's most well-known holdings." (In its article "In Bain deals, Romney gave stock to Mormon church," Reuters explained the massive savings Mitt likely reaped on his tax bill as a result.)
Fast-forward to 2016 and Mitt Romney is trying to turn the tables on Donald Trump. In February, Mitt Romney of all people declared:

"We have good reason to believe that there's a bombshell in Donald Trump's taxes...Either he's not anywhere near as wealthy as he says he is, or he hasn't been paying taxes we would expect him to pay or perhaps he hasn't been giving money to vets or to the disabled like he's been telling us he's been doing."

Now, we have no reason to believe there's a bombshell in Bernie Sanders' taxes. Which is why the message to Team Sanders is so simple. Release them or don't release them, but don't demand grades, birth certificates, speech transcripts or anything else for doing what you should be doing anyway. To put it another way, if you want Americans to #FeelTheBern, #DontBeLikeMitt.