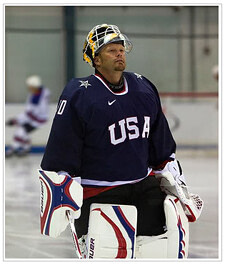 On Monday, goaltender Tim Thomas of the Stanley Cup champion Boston Bruins became just the latest high profile athlete to snub President Obama by refusing to attend a White House ceremony honoring his team. Nevertheless, Thomas' insult to the presidency is unique. After all, Thomas is the first to use the language of the Sovereign Citizen movement to explain his disrespect. And as it turns out, the "Free Citizen" Tim Thomas also happens to represent his country on the U.S. national hockey team.
Thomas took to Facebook to make his case for disgracing himself, his team and his city:

I believe the Federal government has grown out of control, threatening the Rights, Liberties, and Property of the People.
This is being done at the Executive, Legislative, and Judicial level. This is in direct opposition to the Constitution and the Founding Fathers vision for the Federal government.
Because I believe this, today I exercised my right as a Free Citizen, and did not visit the White House. This was not about politics or party, as in my opinion both parties are responsible for the situation we are in as a country. This was about a choice I had to make as an INDIVIDUAL.
This is the only public statement I will be making on this topic. TT

If this kind of anti-government rhetoric sounds vaguely familiar, it should. At best, it resembles a Ron Paul newsletter. But at worst, Tim Thomas took a page from the playbook of the increasingly dangerous Sovereign Citizen movement.
Last May, CBS News provided a look into the evolving anti-government movement:

This is a story about a group of Americans you've likely never heard of: they're called "sovereign citizens." Many don't pay taxes, carry a driver's license or hold a Social Security card. They have little regard for the police or the courts, and some have become violent.
The FBI lists them among the nation's top domestic terror threats.
By some estimates, there are as many as 300,000 sovereign citizens in the U.S. And with the sluggish economy and mortgage mess, their ranks are growing.

Growing, and increasingly dangerous. Just a month ago, David Russell Myrland of the sovereign citizen group called "Assemblies of the Counties" was sentenced for deadly force threats against Washington Gov. Chris Gregoire and King County Prosecuting Attorney Dan Satterberg. Myrland's group also supported jailed Alaska sovereign citizen Francis Schaeffer Cox, who plotted to kill judges and other government officials. In November, another Washington state "sovereign," Kenneth Lemming, was "accused of retaliating against law officers by way of frivolous, multibillion-dollar liens meant to intimidate public officials who've prosecuted or jailed members of the so-called sovereign citizen movement. He is also alleged to have planned to harass the children of U.S. Supreme Court Chief Justice John Roberts."
As father and son Sovereign Citizens Jerry and Joe Kane proved, these are no idle threats. In May 2010, the Kanes murdered two West Memphis police officers during a traffic stop and were themselves later killed in a shootout. Jerry Kane traveled the country with his son delivering seminars on "debt elimination" and what he called "mortgage fraud."

As TPM reported last May, sovereign citizens will claim laws large and small simply don't apply to them:

A sovereign citizen in Virginia was arrested and charged with five misdemeanors after a bizarre encounter with a state police officer where he called himself a "free citizen on a free highway" and gave multiple fake names.
Michael Creath Jones, 31, was pulled over last week by State Trooper T.M. Simmons because he had a fake painted license plate with the words "Virginia" and "private use" handwritten on it.

Thus far, there's no evidence to suggest that Tim Thomas, a man who wears the jersey of the United States, is a "sovereign citizen" who believes himself above its laws. But if he feels so strongly about being a "Free Citizen," he might want to return the silver medal he won at the 2010 Winter Olympics in Vancouver. Regardless, for his insult to the President and all Americans, Thomas has no place being on Team USA.