In the spring of 2016, then-candidate Donald Trump promised Americans he would eliminate the entire $19 trillion national debt of the United States "say over a period of eight years." His pledge was ludicrous on its face. With the CBO already forecasting $6.7 trillion in new debt and Trump proposing a tax plan that would drain up to $8 trillion more from the U.S. Treasury during the same time period, the Donald would have had to slash total federal spending by roughly 90 percent over two terms in office. By statute, it can't be done (as most federal spending is mandatory), but would be cataclysmic if it could. It's no wonder Trump's own budget chief Mick Mulvaney called his boss' debt elimination guarantee "hyperbole."
This week, the nonpartisan Congressional Budget Office (CBO) confirmed that reality does indeed have a liberal bias. After annual budget deficits shrank by two-thirds during President Obama's tenure, CBO warned that the Trump administration will return to trillion-dollar deficits by 2020. In the latest CBO rejection of the GOP myth that "tax cuts pay for themselves," Capitol Hill's budget scorekeeper forecast that the Republicans' "Tax Cuts and Jobs Act" will result in $2.3 trillion in new red ink over the next decade. All told, by 2028 Uncle Sam will pile on an additional $13.2 trillion in new deficit spending, with the national debt as a share of the American economy hitting levels (96 percent) not seen since World War II. 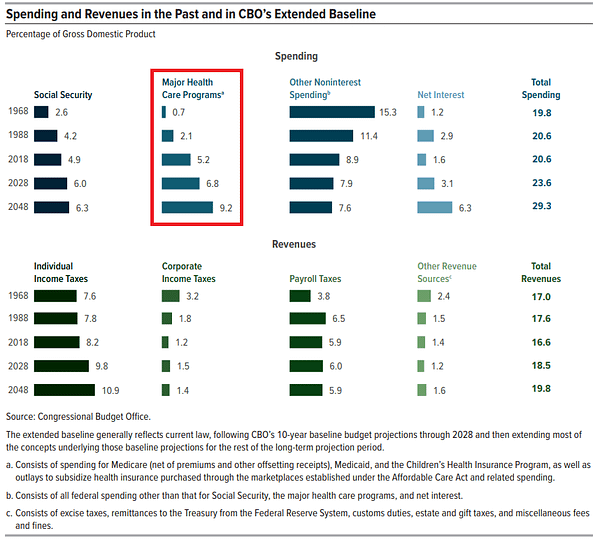 In his statement released with the "The 2018 Long-Term Budget Outlook" released on June 26, the GOP's hand-picked CBO Director Keith Hall explained there is no mystery to the accelerating national debt. "Compared with last year's projections, CBO's current projections of debt as a share of GDP are higher through 2041." Why?

The increase in debt through 2041 stems primarily from tax and spending legislation enacted since then that boosted projected deficits through 2025--especially the 2017 tax act.

But even that picture is worse than it appears:

If lawmakers changed current law to maintain certain policies now in place--preventing a significant increase in individual income taxes in 2026, for example--the result would be even larger increases in debt. The prospect of large and growing debt poses substantial risks for the nation and presents policymakers with significant challenges.

Significant challenges for policymakers, indeed. So, here's a one-sentence cheat sheet to help simplify the problem for our elected officials in Washington: It's the growing cost of health care, stupid! The solution can be stated pretty simply as well. At long last, the United States must join the vast majority of its economic competitors by having the government set the prices for drugs, tests, doctor's visits, hospitalization, surgical procedures, and just about every aspect of health care.
Continue reading at Daily Kos.