The Capitol's Missing Mural of Lee's Surrender to Grant at Appomattox 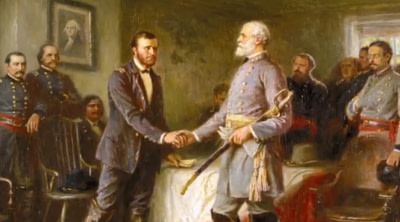 The neo-Nazi violence in Charlottesville has spurred calls around the nation for the removal of public statues, monuments and symbols venerating white supremacy and the "lost cause" of the Confederacy. Those sites include Capitol Hill, where eight statues of Jefferson Davis, Robert E. Lee, Alexander Stephens and five other traitors to the United States were added between 1909 and 1931 at the behest of their home states. But while Democrats including Senator Corey Booker (D-NJ) and Rep. Nancy Pelosi (D-CA) have urged their Republican colleagues to "remove the Confederate statues from the Capitol immediately," Vice President Mike Pence echoed Donald Trump's charge that "they" were attempting "to take away our history and our heritage."

"Obviously, I think that should always be a local decision. And with regard to the US Capitol, should be a state decision. I'm someone who believes in more monuments, not less monuments."

If he is to be taken at his word that "more monuments" help us "remember our history," then Vice President Pence would surely support the installation in the Capitol rotunda of a massive mural depicting Lee's surrender to General Ulysses S. Grant at Appomattox. That never-completed tribute has been missing from Congress for 148 years due to the obstruction on one man.
President Ulysses S. Grant.
That's right. As Mark Neely, Jr., Harold Holzer and Gabor S. Boritt explained in The Confederate Image: Prints of the Lost Cause, Grant "wholly disapproved of the artists' enterprise" in capturing Lee's capitulation on canvas.

When a Congressional commission approach the Northern conqueror soon after the Civil War to propose a painting of Lee's surrender for the Capitol rotunda, Grant refused. He said he would never take part in producing a picture that commemorated a victory in which his fellow countrymen were losers.

In 1869, some members of Congress wanted to put a massive painting of Lee surrendering to Grant in the Rotunda of the Capitol. They visited Grant, who was President-elect, to gain his approval. Grant, who was usually calm, got upset and said, "No, gentlemen, it won't do. No power on earth will make me agree to your proposal. I will not humiliate General Lee or our Southern friends in depicting their humiliation and then celebrating the event in the nation's capitol." This immediately ended any discussion of the painting. [Emphasis mine.]

This was hardly the only example of Grant's generosity and compassion towards his former enemies. By the time the Army of Northern Virginia laid down its arms at Appomattox, General U.S. Grant had already embraced Lincoln's admonition during the Second Inaugural to offer "malice toward none, with charity for all." By offering such generous terms to Robert E. Lee and his soldiers, Grant begun to "bind up the nation's wounds" and "to do all which may achieve and cherish a just and lasting peace among ourselves and with all nations." And to be sure, the respect and dignity Grant accorded Robert E. Lee and his surrendering Army of Northern Virginia was offered despite his disdain for their cause of slavery and secession. As he prepared to accept their capitulation, Grant later wrote of that moment in April 1865:

"I felt sad and depressed at the downfall of a foe who had fought so long and valiantly, and had suffered so much for a cause, though their cause was, I believe, one of the worst for which a people ever fought."

One of the worst causes for a which a people ever fought, indeed. Nevertheless, even after his submission Robert E. Lee, the man who more than any extended the bloody life of the Confederacy, insisted on the rightness of that cause. Not long before his death in 1870, Lee explained:

"Everyone should do all in his power to collect and disseminate the truth, in the hope that it may find a place in history and descend to posterity. History is not the relation of campaigns and battles and generals or other individuals, but that which shows the principles for which the South contended and which justified her struggle for those principles."

But if Lee sought to propagate Southern mythology, he was opposed to the hagiography of its leaders. "I think it wiser," he wrote in 1869, "not to keep open the sores of war but to follow the examples of those nations who endeavored to obliterate the marks of civil strife, to commit to oblivion the feelings engendered."
On that point, Lee's conqueror Ulysses Grant fully agreed. That's why there is no enormous mural in the Capitol rotunda commemorating the Union general's glorious victory. And it's also why all of the Confederate monuments there, elsewhere on Capitol Hill and on public spaces around the United States of America must go.