The Final Word on Snow's Slur

Last week, White House press secretary Tony Snow used his virgin press briefing to reintroduce the racial slur "tar baby" back into the vernacular. But while an unrepentant Snow attacked his critics as "unfamiliar with the pathways of American culture," it would appear that eBay offers a clear picture as to why Random House suggests "avoiding the use of the term in any context." 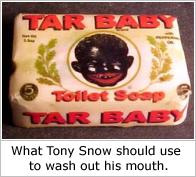 As it turns out, an eBay seller by the name of "Our Southern Collectibles" offers Tar Baby Toilet Soap and other supposed "black Americana" among its large selection of products from the South's days of yore. The image on that bar of soap pretty much says it all; so much for Snow's shared "pathway of American culture."
The point, of course, is not to stand in judgment of the eBay seller community. (In fact, its profile suggests that "Our Southern Collectibles" appears to have very satisfied customers.) Instead, it just goes to show the comfort Tony Snow and his amen corner in the Republican Party display in casually tossing out terms of racial derision and expressing fondness for Confederate nostalgia.
Now, at least, we know what Tony Snow should use to wash out his mouth.

9 comments on “The Final Word on Snow's Slur”