The Inside Poop on Mitt Romney and France

After his disastrous $10,000 bet with Rick Perry comically backfired last week, multimillionaire Mitt Romney responded by trying to appear "human-like" with his tales of deprivation while serving as Mormon missionary in France in the 1960's. Now, his story about being forced to poop in a bucket is getting Romney in some deep merde. As it turns out, Mitt not only spent much of his mission at a palatial church mansion in Paris, but was only able to do so as the result of multiple deferments from military service in Vietnam. 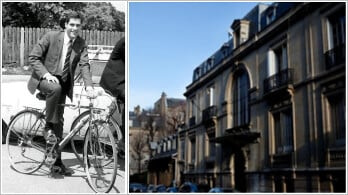 Last weekend, Romney explained was "living on no more than $110 a month in France" during those austere times. And the hardships were especially difficult when the call of nature could not be deferred:

"You're not living high on the hog at that level. A number of the apartments that I lived in when I was there didn't have toilets - we had instead the little pads on the ground - OK, you know how that works, pull - there was a chain behind you with kind of a bucket, bucket affair. I had not experienced one of those in the United States."

But when Mitt claimed that "I lived in a way that people of lower middle income in France lived and I said to myself, 'Wow. I sure am lucky to be born in the United States of America,'" he was luckier than he let on. As the Boston Globe documented in 2007, when France was paralyzed by strikes in 1968 "Romney led a group of missionaries into Spain to find an open bank" to cash "checks sent from their parents." As the Globe also reported, "In spring 1968, Romney moved to the French mission headquarters, a grand building in the tony 16th arrondissement of Paris. The building is now the embassy of the United Arab Emirates." Yesterday, the Telegraph detailed just how tony:

"It was a house built by and for rich people," said Richard Anderson, the son of the mission president at the time of Mr Romney's stay. "I would describe it as a palace"...
"They were very big rooms," said Christian Euvrard, the 72-year-old director of the Mormon-run Institute of Religion in Paris, who knew Mr Romney. "Very comfortable. The building had beautiful gilded interiors, a magnificent staircase in cast iron, and an immense hall"...
Mr Anderson said that as well as a refrigerator, the mansion had "a Spanish chef called Pardo and a house boy, who prepared lunch and supper five days a week".

By many accounts, Romney was a diligent missionary and showed real leadership skills when the mission president was badly injured in a car accident. But that Romney was able to enjoy the fields of France instead of fighting in the rice paddies of Vietnam was due to deferments his church secured for him.
Like many Mormon men of his age, Romney received a 4-D exemption from military service. As the Boston Globe explained in June 2007:

As the Vietnam War raged in the 1960s, Mitt Romney received a deferment from the draft as a Mormon "minister of religion" for the duration of his missionary work in France, which lasted two and a half years.
Before and after his missionary deferment, Romney also received nearly three years of deferments for his academic studies. When his deferments ended and he became eligible for military service in 1970, he drew a high number in the annual lottery that determined which young men were drafted. His high number ensured he was not drafted into the military.

While the large Mormon population in Utah made that practice controversial (and eventually led the government to limit it), in Mitt's home state of Michigan his exemption was virtually guaranteed. Still, his accounts of that time seem to vary. As Time recounted in May 2007:

The closest he has ever come to a personal religious crisis, he recalls, was when he was in college and considering whether to go off on a mission, as his grandfather, father and brother had done. Mitt was deeply in love with Ann, his high school sweetheart and future wife, and couldn't bear to spend more than two years away from her. He says he also felt guilty about the draft deferment he would get for it, when other young men his age were heading for Vietnam.

But in a 1994 interview with the Boston Herald, Romney suggested he felt guilty, but not too guilty:

"Romney, however, acknowledged he did not have any desire to serve in the military during his college and missionary days, especially after he married and became a father," the newspaper wrote. "'I was not planning on signing up for the military,' he said. It was not my desire to go off and serve in Vietnam, but nor did I take any actions to remove myself from the pool of young men who were eligible for the draft. If drafted, I would have been happy to serve, and if I didn't get drafted I was happy to be with my wife and new child.'"

There is no indication that Romney received any special treatment from his father and Michigan Governor, George Romney. But he did apparently share his dad's belief, one that essentially doomed R run for the GOP presidential nomination, that he had been "brainwashed" into supporting the war in Vietnam. As Mitt explained in 2007:

"I really don't recall thinking about political positions when I was knocking at the door in France" as a missionary, Romney said. "I was supportive of my country. I longed in many respects to actually be in Vietnam and be representing our country there and in some ways it was frustrating not to feel like I was there as part of the troops that were fighting in Vietnam."
At the same time, Romney said, he was influenced by the statement of his father, then-Michigan Governor George W. Romney, who said in 1967 that he had been "brainwashed" by US officials about Vietnam. "When my dad said that he had been wrong about Vietnam and that it was a mistake and they had been brainwashed and so forth, I certainly trusted him and believed him," Romney said.

But if Mitt Romney experienced that longing to serve in the military, he apparently didn't share that emotion with his five sons. Almost four decades after his time in France, he told Iowa voters in 2007 that his own sons had a higher calling than the U.S. armed forces in Iraq:

"My sons are all adults and they've made decisions about their careers and they've chosen not to serve in the military and active duty and I respect their decision in that regard. One of the ways my sons are showing support for our nation is helping me get elected because they think I'd be a great president. I respect that and respect all those and the way they serve this great country."

Enmity toward France, where Romney did his Mormon mission during college, is a recurring theme of the document. The European Union, it says at one point, wants to "drag America down to Europe's standards," adding: "That's where Hillary and Dems would take us. Hillary = France." The plan even envisions "First, not France" bumper stickers.

That's not a particularly kind attitude towards the people of France, where 40 years earlier:

Romney was often at the head of the pack in the number of Books of Mormon he distributed, the number of hours he spent knocking on doors, and the number of invitations he received to come back to talk with prospects.

In, it turns out, their own language.
But that's how it goes for the perpetually out-of-touch Mitt Romney. To understand la vie de Romney, one can never take a laissez faire attitude towards anything the man says. When it comes to his stories of poverty and privation in France, Mitt needs a shovel, not a bucket.
And that, as former RNC chairman Michael Steele would say, is the "inside poop."