The Phony War on Catholics

Barack Obama, in the telling of some Republican leaders and their amen corner in the media, is "declaring war on Catholics." So says former Bush speechwriter turned Washington Post columnist Michael Gerson in parroting the wishful thinking and trumped-up controversy of conservatives in a diatribe this week. Sadly for the right-wing echo chamber, both with their votes and their attitudes on a wide range of social issues, American Catholics are with Barack Obama.
The manufactured outrage over Obama's Notre Dame commencement address represents a desperate gambit by some Republicans to bolster a Party rnow educed to its southern, white evangelical rump. After backing George W. Bush over John Kerry by 52% to 47% in 2004, Catholics delivered Barack Obama a comfortable nine-point margin over John McCain four years later. While some Catholics sincerely and profoundly disagree with the President on issues like abortion and stem cell research, the majority of their brethren are little different than the American electorate that put Barack Obama in the White House.
That is among the findings of a recent Gallup poll which examined the attitudes of Catholic Americans. On abortion (40% versus 41%) and embryonic stem cell research (63% vs. 61%), the Gallup study found "almost no difference between rank-and-file American Catholics and American non-Catholics." As it turns out, across a broader swath of issues, Catholics are at least as "liberal" as their non-Catholic counterparts: 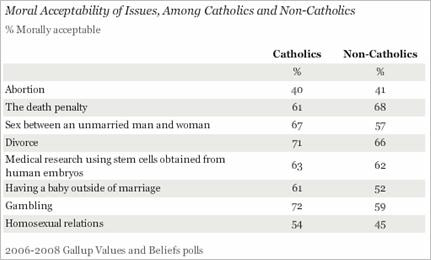 Unsurprisingly, Gallup found that Catholics who regularly attended church were markedly more conservative than occasional church goers. For example, far fewer among the regular church attendees deemed as "morally acceptable" abortion (24% vs. 52%), having children out-of-wedlock (48% vs. 70%) and homosexual relations (44% vs. 61%).
Of course, even less surprising was Gallup's finding that "on most of the issues tested, regular churchgoers who are not Catholic are more conservative (i.e., less likely to find a given practice morally acceptable) than Catholic churchgoers." And as the 2008 exit polls show, that's the only demographic group that still strongly supported John McCain in November.
For its part, the leadership at Notre Dame apparently believes exposing students to the political leadership of their nation, regardless of those leaders' views, fits within the mission of the country's premier Catholic university. Regarding the invitation to President Obama for its May graduation ceremony, the school's president Reverend John I. Jenkins acknowledged, "Of course, this does not mean we support all of his positions" and called the event "a basis for further positive engagement."
To be sure, the university has a long and proud tradition of bringing to campus presidents, politicians and public figures of all stripes to address the students and faculty. The speeches of pro-choice officials including Senator Daniel Patrick Moynihan (1992) and 1975 graduate Condoleezza Rice (1996) are just some of the examples. To commemorate those and other addresses to the graduates of the elite university, Notre Dame Press itself published Go Forth and Do Good: Memorable Notre Dame Commencement Addresses by Rev. Wilson D. Miscamble, C.S.C., professor of history at the University of Notre Dame and rector and superior of Moreau Seminary. The book includes 24 notable graduation speeches from presidents of both parties as well as a litany of figures who no doubt found themselves on opposite sides of the abortion issue:

While a dozen bishops, the twice-divorced nouveau Catholic Newt Gingrich and the usual suspects among the right-wing chattering classes denounced Notre Dame for asking President Obama to speak, the Washington Post's reliably Republican Michael Gerson at least defended the invitation. Claiming that those calling Obama's appearance "an outrage and a scandal" go "too far," Gerson insisted, "If you cannot honor the man, then honor the office."
But Gerson's defense of principle quickly gave way to partisan politics in a piece displayed in your browser window under the hysterical title, "Declaring War on Catholics." While noting Obama's victory among Catholic voters and support among "pro-life, pro-Obama" figures like Clinton inquisitor Douglas Kmiec, Gerson pretends that President Obama is doing something other than what candidate Obama promised across a range of red meat social issues. Despite Obama's truth in advertising, Gerson thundered that his Catholic supporters have been betrayed:

So far, Obama has done little to justify this faith. His initial actions on life issues -- funding overseas abortion providers, removing restrictions from federally funded medical experimentation on human embryos, revisiting conscience protections for pro-life health-care professionals -- have ranged from conventional to radical...
Catholics are having second thoughts, but it could get much worse. If the president and Congress are not careful on several issues, these concerns could open a major rift between the Catholic Church and the Democratic Party.

While Gerson cites data to suggest President Obama's support among white, non-Hispanic Catholics has dipped since his inauguration, the broader trends suggest a different "rift" has emerged. As the results at the ballot box and in opinion polls suggest, the real gulf is between rank-and-file American Catholics and the more conservative leadership of their faith. And the appropriation of the latter's outrage by the ideologues supporting the Republican Party can't obscure that fact.
Despite the myth-making of Gerson and company, there is no "war on Catholics." Whether there is a war within, however, is a different question altogether.