The Republican Confederacy of Dunces 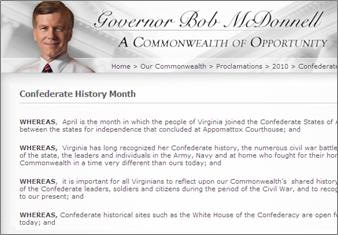 A modest proposal: no one displaying the Confederate flag gets to lecture any American about patriotism - ever. Ditto for anyone trafficking in Confederate nostalgia as a political strategy. Of course, that new red, white and blue rule would pose a problem for today's Republican Party. After all, Virginia Governor Bob McDonnell, the same man who delivered the GOP's response to President Obama's 2010 State of the Union, this week resurrected "Confederate History Month" in Richmond. And to be sure, when it comes to flying the Stars and Bars and talking up secession, nullification and "the war of Yankee aggression," McDonnell has plenty of company among the leading lights of the Republican Party.
Exhuming a ritual buried by his Democratic predecessors Mark Warner and Tim Kaine, McDonnell called on Virginians to celebrate the South's failure in the conflict bookended by Sumter and Appomattox, one he deemed "a four year war ... for independence." More shocking still, McDonnell's proclamation ignored the issue of slavery altogether because, he claimed, "I focused on the ones I thought were most significant for Virginia." Governor Jim Gilmore's 1999 declaration at least recognized slavery as the cause of the war that killed over 600,000 Americans, a point a humbled General Ulysses Grant made for posterity at Appomattox:

"I felt sad and depressed at the downfall of a foe who had fought so long and valiantly, and had suffered so much for a cause, though their cause was, I believe, one of the worst for which a people ever fought."

Sadly, Bob McDonnell is far from alone among Republican leaders past and present reminding Americans that the old times there are not forgotten.
As the health care reform debate reached its climax in March, Rep. Paul Broun of Georgia was among those longing for the days of the ante bellum South. Missing the irony that health care is worst in those reddest of Southern states where Republicans poll best, Broun took to the House floor to show that he was still fighting the Civil War:

"If ObamaCare passes, that free insurance card that's in people's pockets is gonna be as worthless as a Confederate dollar after the War Between The States -- the Great War of Yankee Aggression."

If you thought you had heard that outdated term of Dixie revisionist history recently, you did. In February 2009, Missouri Republican Bryan Stevenson took exception to President Obama's support for the Freedom of Choice Act, legislation which codify the reproductive rights protections of Roe v. Wade nationwide:

"What we are dealing with today is the greatest power grab by the federal government since the war of northern aggression."

That expression was also a favorite of former Senate Majority Leader and later Minority Whip (really, you can't make this up) Trent Lott. Lott was a speaker in 1992 at an event of the Council of Conservative Citizens, a successor to the White Citizens' Councils of Jim Crow days. Among its offerings in seething racial hatred is a "Wanted" poster of Abraham Lincoln. Lott's also offered his rebel yell in the virulently neo-Confederate Southern Partisan, where in 1984 he called the Civil War "the war of aggression." That was years before he lauded the legendary racist and 1948 Dixiecrat presidential candidate, Strom Thurmond:

"I want to say this about my state: when Strom Thurmond ran for President, we voted for him. We're proud of it. And if the rest of the country had followed our lead, we wouldn't have had all these problems over all these years, either."

Trent Lott is not the only Mississippi Republican to support groups like the CCC and honor the Confederate flag. Former Republican National Committee Chairman and now Mississippi Governor Haley Barbour wore a lapel pin with the image during his campaign and attended a CCC barbeque in 2003.
Another neocon (that is, neo-Confederate) is former Attorney General John Ashcroft. Ashcroft granted a long interview with the Southern Partisan, in which he stated:

"Your magazine helps set the record straight. You've got a heritage of doing that, of defending Southern patriots like [Robert E.] Lee, [Stonewall] Jackson and [Jefferson] Davis. Traditionalists must do more. I've got to do more. We've all got to stand up and speak in this respect or else we'll be taught that these people were giving their lives, subscribing their sacred fortunes and their honor to some perverted agenda."

Then there's Bob McDonnell's predecessor of "Macaca" fame, George Allen. Long before the YouTube gaffe that derailed his 2006 Senate reelection bid, Allen's affection for the CSA was as clear as black and white. Allen, who in 2005 co-sponsored a resolution apologizing for the Senate's past use of the filibuster against anti-lynching legislation in the 1920's, displayed a Confederate flag and a noose at his home. While governor of Virginia, Allen declared "Confederate Heritage Month" and branded the NAACP an "extremist group."
But while George Allen as a Southern California teenager sported a Confederate flag lapel and "plastered the school with Confederate flags," former Arkansas Governor and 2012 White House hopeful Mike Huckabee continues to support the banner of the CSA. During the 2008 South Carolina primary, Huckabee announced:

And so it goes. While Texas Governor Rick Perry spoke of "secession" in the wake of the Obama stimulus program, health care reform opponents trot out the long-dead notion of "nullification." (Regarding the first of these Confederate talking points from the GOP, even Supreme Court Justice Antonin Scalia remarked, "If there was any constitutional issue resolved by the Civil War, it is that there is no right to secede.")
Which brings us back to U.S. Grant. As President, Ulysses Grant continued to offer not recriminations or retribution but respect to Southern sensibilities. In 1869, several Congressmen sought to add to the Capitol rotunda a huge mural depicting Lee surrendering to Grant at Appomattox. As authors Harold Holzer and Gabor Boritt wrote, Grant would have none of it. "He said he would never take part in producing a picture that commemorated a victory in which his own countrymen were losers." Grant is said to have remarked:

"No, gentlemen, it won't do. No power on earth will make me agree to your proposal. I will not humiliate General Lee or our Southern friends in depicting their humiliation and then celebrating the event in the nation's capitol."

One can only wish that Bob McDonnell and today's Republican bowing their heads before the Confederate flag would show as much consideration, sensitivity and respect to their fellow Americans as Grant afforded their ancestors 150 years ago.
UPDATE: Facing a firestorm of criticism, Governor McDonnell issued an unpology, declaring, "The failure to include any reference to slavery was a mistake, and for that I apologize to any fellow Virginian who has been offended or disappointed."