The Resurrection of Lamar Alexander 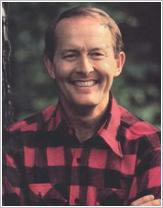 In May 1996, a sheepish businessman admitted to a hotel bellhop, "There's a guy in the lobby who was running for president two months ago, and now I've forgotten his name." When the bellhop told him the man was the former Tennessee Governor, the businessman quickly remembered, "that's right, Lamar Alexander."
Now, 14 years after he hung up his trademark red and black flannel shirt as he exited the 1996 Republican presidential primaries, Tennessee Senator Lamar Alexander suddenly matters again. As his jousting with President Obama at Thursday's White House health care summit and his appearance on ABC's This Week shows, the man who once walked a thousand miles around the Volunteer State is now the face of the all-out Republican opposition to health care reform.
On Thursday, CNN's Gloria Borgia suggested why the GOP chose this moment to resurrect Alexander:

"The Republicans kind of shook things up a bit by putting Lamar Alexander out there. I think he's a folksy, different voice that people hear."

And when it comes to the ersatz authenticity Borger compliantly deemed "folksy," Lamar Alexander is the right man for the job.
Before Fred Thompson and Scott Brown rolled into the Senate behind the wheels of the respective pick up trucks, Alexander blazed the trail other supposed self-made Republican men would follow. As the New York Times wrote in 1996:

In 1974, as the 34-year-old Republican candidate for Governor of Tennessee during the maelstrom of Watergate, he was relentlessly attacked for his year and a half in the Nixon White House, even though he had been only a junior aide. In that first, unsuccessful race, he also found that his image as a pin-striped Phi Beta Kappa lawyer, which had served him well inside the Beltway, played badly back home against an opponent who was a farmer, a road contractor and a former Congressman touted as the state's "good old boy."
When Mr. Alexander tried again for the Governor's Mansion four years later, he donned a red-and-black plaid shirt, walked across the state and reinvented himself as a man of the people. This time, he won.

When the former Governor and Reagan education secretary ran for President in 1996, the extreme makeover was complete. He followed Cher and Madonna into the ranks of single-name celebrities, becoming "Lamar!" And the shirt, if not his actual candidacy, became the stuff of political legend. Again, the New York Times:

So far, Lamarwear is selling better than Lamar.
As a Republican Presidential candidate, former Gov. Lamar Alexander of Tennessee's popularity is stagnating at 3 percent in the polls. As a fashion statement, his numbers are much better.
Here in eastern Tennessee, the Proffitt's department store chain is nearly sold out of Mr. Alexander's trademark red-and-black flannel shirts, which the store is marketing under the label "Lamar!" The store's buyers ordered 65 dozen of the shirts this fall and have sold all but five or six dozen in two months. The price: $39.50.

Despite his strong showing in the Iowa caucus, Alexander ultimately came up short against Bob Dole in New Hampshire. As he described it in 1999 just months before his aborted 2000 campaign:

"Last time, my shirt came within 3,800 votes of beating Bob Dole in the New Hampshire primary. My shirt came closer to winning the nomination than I did."

Now, the shirt is back, if only metaphorically. On Thursday, Lamar Alexander add his folksy spin to the same Republican "kill it and start over" health care talking point Bill Kristol first introduced last July:

"This is a car that can't be recalled and fixed and we ought to start over."

And just in case anyone missed it, on Sunday Alexander reprised his good ol' boy critique of health care reform as Toyota:

"This is a car that can't be recalled and fixed. There are too many things wrong with it."

Of course, he could have been describing the Republicans' unprecedented obstructionism in the face of the growing crisis of the American health system. Apparently, the party of stuffed shirts has chosen to sugar coat its scorched earth politics with a different face - if not a different shirt.