The Return of the Spend-and-Not-Tax Republicans

Like a recurring biblical plague, they descend across the country. Despite the repeated warnings from both experts and lay persons of good faith and common sense, the media and tens of millions of people are nevertheless still shocked by their arrival. As predicted, they devastate everything in their path, leaving a swath of destruction in their wake. While the rich and comfortable profit from their appearance, the multitudes will suffer for years to come. In the aftermath of the calamity, the people are told they must sacrifice and do without for their own good and for that of their children.
I'm not talking about swarms of locusts or cicadas, but those most destructive creatures known as "Spend and Not Tax" Republicans. Having once again falsely promised "tax cuts pay for themselves," Donald Trump and the GOP majorities in the House and Senate instead have produced red ink as far as the eye can see. And to fund their massive windfalls for the wealthy, Trump's Republicans demand draconian reductions in Social Security, health care, and safety net programs so vital to tens of millions of Americans of all ages. 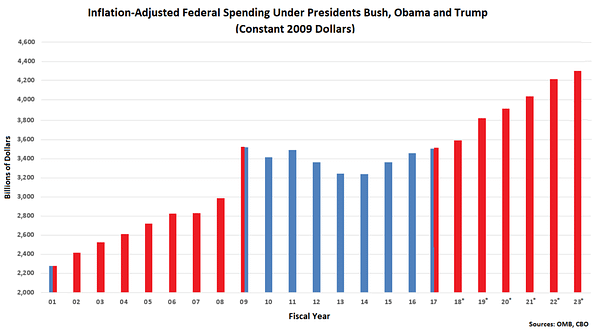 That was the word this week from Washington. On Monday, House Republicans unveiled "Tax Cut 2.0." This successor to the Tax Cuts and Job Act would add $650 billion in new debt between 2018 and 2026 on top of the $1.5 trillion in revenue losses forecast by the nonpartisan Congressional Budget Office (CBO). In the ensuing decade, the Center on Budget and Policy Priorities estimates the price tag will jump to a staggering $2.9 trillion, even as "It would cut taxes by about $32,000, or 2.2 percent, for the richest 1 percent of households while the bottom 60 percent would come away with about $340 (1 percent)." Meanwhile, that same day CBO made clear that Trump's reckless tax cuts and increased spending are producing budget deficits much larger than what the nonpartisan budget scorekeeper projected this spring.
Continue reading at Daily Kos.