This week's release of the 2010 U.S. Census produced gloating from conservatives ecstatic about new Congressional seats in Republican, low-tax states. But as even as they celebrate their added political clout, GOP cheerleaders remain predictably silent about another recent study. The UnitedHealth Foundation's "America's Health Rankings" became just the latest analysis to show that health care is worst in precisely those states where Republicans poll best.
The findings from the UnitedHealth Group project revealed that Vermont, Massachusetts, New Hampshire, Connecticut and Hawaii topped the overall health rankings. (It should be noted that Hawaii has offered a near-universal health care system for years while the insurance mandate in Massachusetts has helped reduce the ranks of the uninsured to only 3%.) Eight of the top 10 and 12 of the top 15 states voted for Barack Obama in 2008. In contrast, the McCain/Palin ticket swept nine of the 10 worst performers, most of which are in the Republicans' solid south. 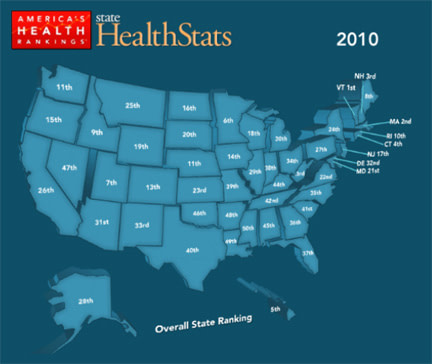 Following up on its 2009 study which similarly revealed that blue states have the healthiest residents, AMR concluded:

The nation's overall health improved one percentage point last year, but reductions in smoking, preventable hospitalizations and infectious disease were offset by continued increases in obesity, children in poverty, and lack of health insurance.

In June, the Commonwealth Fund reported that the U.S. health care system badly lags its global competitors. And like America's Health Rankings, the Commonwealth Fund found that health care is worst in those reddest of red states, especially in the South.
In the fall of last year, the Commonwealth Fund released its 2009 state health care scorecard. There, too, Mississippi led the Republican south in providing dismal health care. Again, while nine of the top 10 performing states voted for Barack Obama in 2008, four of the bottom five (including Arkansas, Mississippi, Oklahoma and Louisiana) and 14 of the last 20 backed John McCain. (That at least is an improvement from the 2007 data, in which all 10 cellar dwellers had voted for George W. Bush three years earlier.) 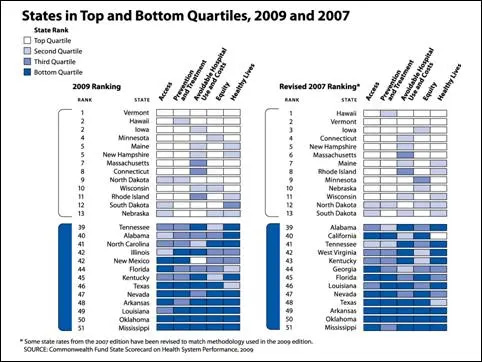 (Another recent report on women's health care by the National Women's Law Center discovered almost identical geographical disparities.)
As it turns out, these data are as ironic as they are tragic. After all, the 20 attorneys general suing to stop the Affordable Care Act signed into law by President Obama come primarily from the same Republican states whose residents are so badly in need of health care reform. And, as the Washington Post explained in "A Red State Booster Shot" eighteen months ago, it would be blue state taxpayers footing the bill:

Health-care reform may be overdue in a country with 45 million uninsured and soaring medical costs, but it will also represent a substantial wealth transfer from the North and the East to the South and the West. The Northeast and the Midwest have much higher rates of coverage than the rest of the country, led by Massachusetts, where all but 3 percent of residents are insured. The disproportionate share of uninsured is in the South and the West, the result of employment patterns, weak unions and stingy state governments. Texas leads the way, with a quarter of its population uninsured; it would be at the top even without its many illegal immigrants.

As it turns out, health care reform spending will be little different from the overall pattern of red state socialism. That is, red state residents disproportionately benefit from the steady one-way flow of tax dollars and earmarks spreading the wealth from Washington to their states.
And that, like their states' dismal health care performance, is nothing for Republicans to crow about.