This Just In: Social Security Still Not a Driver of U.S. Debt

As Washington's stalemated debate over avoiding the so-called "fiscal cliff" continues to fester, Social Security is once again in the cross-hairs of would-be deficit hawks across the political spectrum. This week, the New York Times profiled Maya MacGuineas, who "has spent years warning about threats to the solvency of Social Security and to the rating of American debt." While conservative Senator Lindsey Graham (R-SC) declared, "I will raise the debt ceiling only if we save Medicare and Social Security from insolvency and prevent this country from becoming Greece," centrist Fareed Zakaria and liberal Ruth Marcus took "the American left" to task for the "liberal uproar" over its opposition to President Obama's support for using the "chained CPI" to raise taxes and curb the growth of Social Security benefits.
Unfortunately, there's one small problem with these bipartisan calls to swing the budget axe at the pension system upon which tens of millions American retirees depend. As it turns out, Social Security simply is not a major driver of the U.S. national debt.
Now, it is may be true that 1 in 5 Americans will be over age 65 by 2030 and that there will be there will be just over two workers per retiree (compared to five per retiree in 1960). But as Ezra Klein explained in "the single best graph on what's driving our deficits":

What these three charts tell you is simple: It's all about health care. Spending on Social Security is expected to rise, but not particularly quickly. Spending on everything else is actually falling.

Which is exactly right. As the nonpartisan Congressional Budget Office (CBO) explained in its November analysis "Choices for Deficit Reduction," it is the rapid growth of federal health spending--especially on Medicare for almost 50 million seniors--which risks overwhelming the federal budget. (It is worth noting that the near-doubling of defense spending since 2000 means that all other discretionary spending has contracted on education, transportation, research, foreign aid and everything else.) But while combined federal health care spending as a percentage of the U.S. economy will roughly triple between 2000 and 2030, Social Security will tick upwards from about 4 percent to 6 percent.
And while Social Security is not a major factor in the growth of U.S. national debt, its dedicated trust fund actually makes the current deficit picture look better, not worse. As David Cay Johnston helpfully summed it up in May:

Which federal program took in more than it spent last year, added $95 billion to its surplus and lifted 20 million Americans of all ages out of poverty?
Why, Social Security, of course, which ended 2011 with a $2.7 trillion surplus.
That surplus is almost twice the $1.4 trillion collected in personal and corporate income taxes last year. And it is projected to go on growing until 2021, the year the youngest Baby Boomers turn 67 and qualify for full old-age benefits.
So why all the talk about Social Security "going broke?"

The answer, as Johnston lamented, is that "the people who want to kill Social Security have for years worked hard to persuade the young that the Social Security taxes they pay to support today's gray hairs will do nothing for them when their own hair turns gray." And at the center of their argument, Paul Krugman has repeatedly warned, is a bait and switch. After the Washington Post joined the conservative chorus last year bemoaning the fact that the temporary payroll tax cut predictably resulted in Social Security is currently taking in less in payroll taxes than it's paying out in benefits, Krugman explained:

Social Security is a program that is part of the federal budget, but is by law supported by a dedicated source of revenue. This means that there are two ways to look at the program's finances: in legal terms, or as part of the broader budget picture.
In legal terms, the program is funded not just by today's payroll taxes, but by accumulated past surpluses -- the trust fund. If there's a year when payroll receipts fall short of benefits, but there are still trillions of dollars in the trust fund, what happens is, precisely, nothing -- the program has the funds it needs to operate, without need for any Congressional action.
Alternatively, you can think about Social Security as just part of the federal budget. But in that case, it's just part of the federal budget; it doesn't have either surpluses or deficits, no more than the defense budget.
Both views are valid, depending on what questions you're trying to answer. 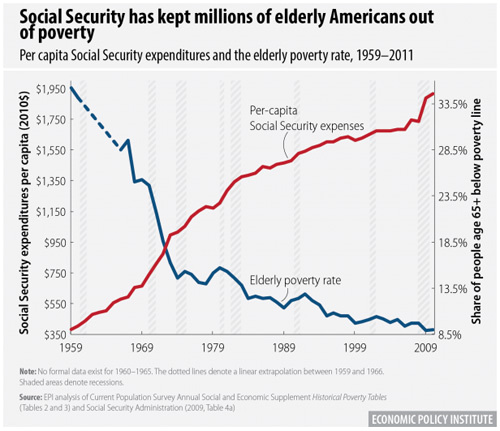 In the longer term, Social Security's finances will need some shoring up. Its actuaries forecast that the program will start paying out more than it starts taking in by 2021. Under current tax rules, by 2033, recipients would receive only about three-quarters of promised benefits. But as Johnston advocates, there are several straight-forward options for keeping Social Security in the black for generations to come:

(You can test the impact of this and other changes on the U.S. debt by experimenting with the New York Times' interactive "budget puzzle.")
A variation is the one proposed by then candidate Barack Obama in 2007 and introduced to the Senate last year by Bernie Sanders (I-VT). Sanders' bill would impose the payroll tax on incomes above $250.000 a year, a move guaranteeing the program's future for 75 years.
Social Security, as Senator Sanders protested last year, "is not going bankrupt and it is not going broke." But in conjunction with Medicare, it is keep millions of elderly Americans out of poverty. As the Center on Budget and Policy Priorities (CBPP) recently reported, without Social Security, 14 million more seniors would live below the poverty line, a staggering jump from 8.7 percent to over 43 percent:

But not, as the fiscal cliff dwellers suggest, a cause of today's federal deficits.