Three Trillion and One Reasons for a War Tax 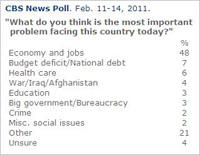 Three trillion dollars. Once all the costs of the actual fighting, veterans care, expanded baseline defense spending and extra interest on the national debt are factored in, that's the price tag for the still-unfunded American wars in Afghanistan and Iraq. But there's one more reason to institute a post-recession war tax to pay for the U.S. conflicts abroad. As the nation's military leadership suggested last week, the American people are becoming increasingly disconnected from the troops they claim to support.
After the attacks of September 11th, President Bush didn't call on Americans to serve, but instead to go shopping and "get down to Disney World." (Bush also became the first modern president to cut taxes during wartime.) Now, ten years later, "Some of Washington's top national security leaders are worried that Americans don't know -- or worse, don't care" about the staggering toll on the troops and their families.
As Politico reported earlier this week:

Spouses of service members are badly stressed from years of long deployments -- so stressed that some have taken their own lives. Children who've had a parent away at war for almost their entire conscious lives are leaving home to go off to college. And the troops themselves continue to struggle with substance abuse, post-traumatic stress, and devastating physical and mental wounds...
Top Defense Department officials and other leaders began talking quietly last year about a "gap" or "split" between the military and the general population. But in recent weeks, they've been expressing those concerns more often and more boldly.
Former House Armed Services Committee Chairman Ike Skelton (D-Mo.), who lost his seat in Congress in November, warned early this month that "those who protect us are psychologically divorced from those who are being protected."
Adm. Mike Mullen, chairman of the Joint Chiefs of Staff, told House lawmakers on Wednesday that there's a "growing disconnect between the American people and the military." The public knows generically that their troops are at war, but "the day to day connections are less than they used to be, the depth and breadth of who we are and what we're doing, isn't there."

That disconnect is evident in the polling booth and in the polls. In 2004, 18% of voters had served in the military. By the time Barack Obama thumped John McCain four years later, veterans made up only 15% of the electorate.
As Politico also noted, "The 2010 midterm elections passed with almost no debate on Iraq or Afghanistan." Only 5% of respondents in a January Gallup poll cited the wars as the most important problem facing the United States. In a CBS News survey just days ago, it wasn't close. The economy/jobs (48%) was far and away the nation's most important issue; the wars in Iraq and Afghanistan came in fourth at just 4%. (The CBS News story summarizing the poll's findings didn't even mention the words "war", "Iraq" or "Afghanistan.")
For leaders like Defense Secretary Robert Gates warning about Americans' "split" from their military, the path to reestablishing that bond isn't onerous:

Gates, Mullen and others usually conclude their warnings about the civil-military divide by listing ways they hope Americans will help the 1 million or so troops who have served in Iraq and Afghanistan. For example, Mullen wants government and private-sector employers to give preference, or at least an equal shot, to veterans looking for jobs. He has also warned that Americans must be prepared for decades' worth of support to keep today's veterans from becoming homeless in the numbers that the military saw after Vietnam.

Still, if the American people were willing to let their volunteer armed services fight their wars, the least we can do is pay for them. After all, the Greatest Generation not only fought to defeat the Germans and Japanese, they paid a top tax rate of 94% to help pay for victory. Sadly, during the Bush years, as Utah Republican Senator Orrin Hatch admitted in 2009:

"It was standard practice not to pay for things."

Well, the bill is due, and it's a big one.
In September 2010, the Congressional Research Service put the total cost of the wars at $1.12 trillion, including $751 billion for Iraq and $336 billion for Afghanistan. For the 2012 fiscal year which begins on October 1, President Obama will ask for $117 billion more. (That war-fighting funding is over and above Secretary Gates' $553 billion Pentagon budget request for next year.) But in addition to the roughly $1.5 trillion tally for both conflicts through the theoretical 2014 American draw down date in Afghanistan, the U.S. faces staggering bills for veterans' health care and disability benefits. Last May, an analysis by the Center for American Progress estimated the total projected total cost of Iraq and Afghanistan veterans' health care and disability could reach between $422 billion to $717 billion. Reconstruction aid and other development assistance represent tens of billions more, as does the additional interest on the national debt. And none of the above counts the expanded funding for the new Department of Homeland Security.
But that two-plus trillion dollar tab doesn't account for the expansion of the United States military since the start of the "global war on terror." While ThinkProgress explained that the Pentagon's FY 2012 ask is "the largest request ever since World War II," McClatchy explained:

Even with the proposed $78 billion in cuts and troop reductions advocated by Gates and Obama over the next five years, "the bottom-line figure would still go up during that time, with projected spending totaling $643 billion in 2015 and $735 billion in 2020."

Even with the reduction in staffing forecast for 2015, the Army and Marine Corps would be larger than they were when the Iraq and Afghanistan wars began.

Despite the grumbling of some Tea Party members, Congressional Republicans have made clear they want no cuts to defense as part of their $100 billion reduction in discretionary spending.
Still, now isn't the time to raise income and other taxes. (Nor, for that matter, to reign in critical infrastructure spending and needed relief for the states.) While gaining steam, the tenuous recovery from the Bush recession is still in its early stages. And, lamentably, President Obama and Congress just two months ago inked a compromise two-year extension to the Bush tax cuts which will add another $800 billion in red ink to the U.S. national debt, much of it in new windfalls for the wealthiest Americans needing them least.
But by 2013, after the next presidential election and almost 10 years after the invasion of Iraq, the improving economy should allow Americans to pay for their wars. After all, next to actually fighting in them, it's the very least we could do.
(For one proposal, see "The Bipartisan War Tax Act of 2013.")