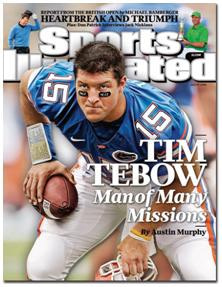 Heisman trophy winner Tim Tebow hasn't played a down in the National Football League, but he will nonetheless be a star during the Super Bowl on February 7. That's because the University of Florida quarterback will join his mother in a 30-second Super Bowl ad to deliver an anti-abortion message funded by Focus on the Family. And given the media's fawning coverage so far of Tebow's evangelical fervor, Super Sunday promises to be only the next installment of his pigskin proselytizing.
As the AP reported, Focus on the Family is forking over the estimated $2.8 million for the virgin Tebow to lecture Americans on their reproductive choices on CBS, a network which previously refused to run other controversial ads during the Super Bowl:

The former Florida quarterback and his mother will appear in a 30-second commercial during the Super Bowl next month. The Christian group Focus on the Family says the Tebows will share a personal story centering on the theme "Celebrate Family, Celebrate Life."
The group isn't releasing details, but the commercial is likely to be an anti-abortion message chronicling Pam Tebow's 1987 pregnancy. After getting sick during a mission trip to the Philippines, she ignored a recommendation by doctors to abort her fifth child and gave birth to Tim.

Many sports fans were introduced to that tale and the politics behind it in a hagiographic cover feature titled "You Gotta Love Tim Tebow" in the July 27, 2009 issue of Sports Illustrated. In a piece which lauded Tim Tebow's praiseworthy work for charity (and which featured a page layout including crosses as design elements), SI's Austin Murphy seamlessly wove in the Christian ministry - and ideology -of the Tebow family:

The man on the other end of the line is calling from the Philippines. He has taken time from his missionary work to reply to a reporter's e-mailed questions. Now Bob Tebow has a question of his own: "Have you heard the story of Timmy's birth?"
Even if you have, it's worth hearing from the mouth of his father: "When I was out in the mountains in Mindanao, back in '86, I was showing a film and preaching that night. I was weeping over the millions of babies being [aborted] in America, and I prayed, 'God, if you give me a son, if you give me Timmy, I'll raise him to be a preacher.'" Not long after, Bob and Pam Tebow conceived their fifth child. It was a very difficult pregnancy. "The placenta was never properly attached, and there was bleeding from the get-go," Bob recalls. "We thought we'd lost him several times." Early in the pregnancy Pam contracted amebic dysentery, which briefly put her in a coma. Her doctors, fearful that medications they had given her had damaged the fetus, advised her to abort it. She refused, and on Aug. 14, 1987, Pam delivered a healthy if somewhat scrawny Timothy Richard Tebow.
"All his life, from the moment he could understand, I told him, 'You're a miracle baby,'" Bob recalls. "'God's got a purpose for you, and at some point I think He's going to call you to preach.'
"I asked God for a preacher, and he gave me a quarterback."

Months before the publication of Tom Krattenmaker's book Onward Christian Athletes, Sports Illustrated related how Tebow's prayers led his Gator team to victory in the 2009 national championship game over Oklahoma:

The verses had the desired effect, relaxing the assembled Gators so much that a kind of impromptu revival meeting broke out. Soon the entire group had broken into song. Casting his mind back to that day, Tebow recalls informing his teammates that they would beat the Sooners "not because we're the better team or because we've worked harder," although he believed those things were true. "We're going to win because we're going to handle it the right way, we're going to be humble with it, with God leading us."

Sadly for Tebow, this year God was apparently an Alabama fan, as the Crimson Tide smote the Gators 32-13 on the way to the 2010 title.
As his frank answer to the question about his virginity suggests, Tim Tebow would appear to the walk the walk when it comes to his faith. But to be sure, he has been helped in his proselytizing by the media megaphone he's been given.
Consider, for example, the now weekly ritual of deciphering the biblical verses Tebow etched into his "eye black." Over the 2009 season, Tebow wrote on those black patches shortened versions of Hebrews 12:1-2, John 16:33, Thessalonians 5:18, Mark 8:36 and Ephesians 2:8-10, among others. For his last game in Gainesville, as ESPN reported in November, "Florida fans are urging everyone to wear eye black Saturday -- with or without inscribed bible verses -- in honor of quarterback Tim Tebow's final home game." (No doubt, there are fans in Tuscaloosa wearing eye black with the inscription, "ALA 32:13.")
By all appearances, Tim Tebow is a devout and sincere young man. But in fronting for an organization like Focus on the Family, Tebow has aligned himself with the likes of James Dobson, its hard-line anti-gay founder whose efforts have included a crusade against Spongebob Squarepants. Among FOTF's most recent faith-based initiatives was a "prayercast" to stop health care reform.
As the experience of Arizona Cardinals born-again quarterback Kurt Warner revealed, Tebow risks alienating not only NFL fans, but some of his teammates. Besides, when football fans turn on the TV set on Sunday, many have been to church already. Regardless, for a guy who hasn't yet tossed his first pass as a professional, Tim Tebow risks the wrath of his future fans by throwing a Super Sunday Hail Mary on an issue like abortion.