With the NSA domestic spying scandal and Pesident Bush's 2006 State of the Union Address, the past week has seen another shake-up in the Top 10 GOP Sound Bites.
Jumping to the top of the charts is the hard rocking smash hit, George W. Bush's "Terrorist Surveillance Program." Another cut from that same broken record, Karl Rove's "Pre-9/11 Mindset," vaulted to the #3 in the rankings. Still strong in second place is Scott McClellan's lyrical magic, "Ongoing Investigation."
Dropping off the charts was November's number one, "Rewriting History (is Irresponsible)." Also disappearing into the ether was Kay Bailey Hutchison's touching ballad to Scooter Libby, "No Underlying Crime (Perjury Technicality)."
Here is the complete list of the latest Top 10 GOP Sound Bites: 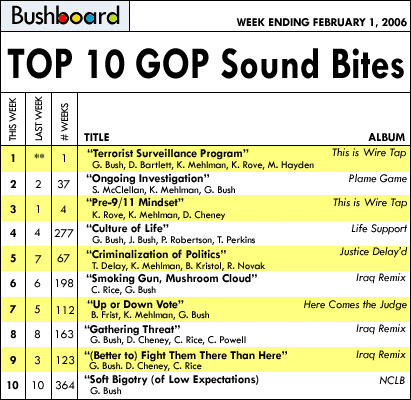