The past two weeks have seen a changing of the guard atop the Top 10 GOP Sound Bites list.
With the contentious Congressional debate over the path forward in Iraq, the fire and brimstone Republican smash hit "Cut and Run" vaulted to the top of the charts. Performed by George Bush, Dick Cheney, Karl Rove, Ken Mehlman and John Boehner with a chorus of hundreds on Capitol Hill, "Cut and Run" easily outpaced the new #2, "No Civil Liberties (When You're Dead)." That cut by Senators Pat Roberts, John Cornyn and Jeff Sessions is just the latest ditty from the "This is Wire Tap" sound track to move up the Bushboard list. 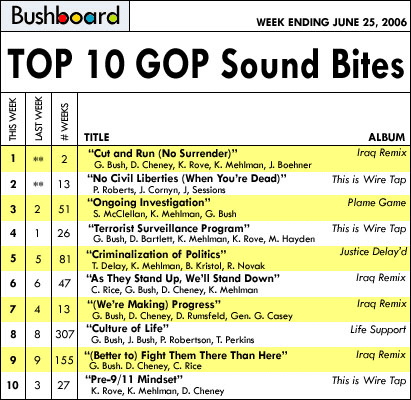 Dropping off the Top 10 list was the Iran war drumbeat and April's #1, "Wild Speculation" by George Bush and Donald Rumsfeld. Also falling off the charts was Scott McClellan's dance mix, "(Leaking Is In) The Public Interest."
To see previous Top 10 GOP Sound Bites lists, visit the Perrspectives Image Gallery.