The last two weeks have produced a dramatic shake-up in the Top 10 GOP Sound Bite list. The exploding Mark Foley scandal, the disintegration of Iraq and the new terrorist detainee legislation sent a bevy of Republican ditties racing up the charts. Meanwhile, some old conservative standards have fallen by the way side. 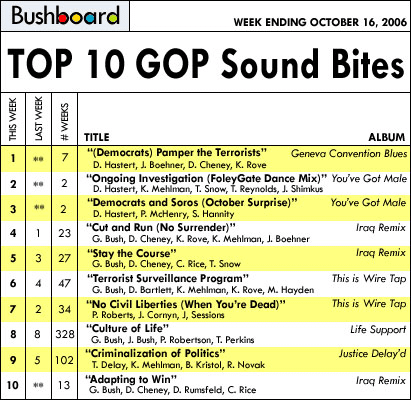 Soon-to-be former Speaker of the House Dennis Hastert now has three smash hits at the top of the charts. Hastert's hard-rocking cut "(Democrats) Pamper the Terrorists" from the GOP's pre-election Geneva Convention Blues release is this week's new #1. Two singles from the House Republicans' You've Got Male ode to Mark Foley follow close behind. Hastert's dance remix of Scott McClellan's 2005 smash hit "Ongoing Investigation," performed with Ken Mehlman, Tony Snow, Tom Reynolds and John Shimkus, catapulted to #2. Meanwhile, the haunting ballad "Democrats and Soros" comes in at #3.
The carnage in Iraq and the coming Iraq Study Group report from Bush family consigliere James Baker III have sent three GOP favorites plummeting down the rankings. Last week's #1, "Cut and Run," dropped to #4, while "Stay the Course" dipped to fifth place. The nonsensical Bush-Cheney rap "Adapting to Win," with backing vocals from Donald Rumsfeld and Condi Rice, fell to number 10. Other past monster hits from President Bush's Iraq Remix, including "Better to Fight Them There Than Here" and "We're Making Progress," have disappeared from the Top 10 altogether.
You can see the archives of the Top 10 GOP Sound Bites list in the Perrspectives Image Gallery here.