The building bipartisan opposition to the President's proposed troop surge in Iraq and the crickets-chirping reception to Bush's abysmal State of the Union address have led to another dramatic shake-up in the list of Top 10 GOP Sound Bites. 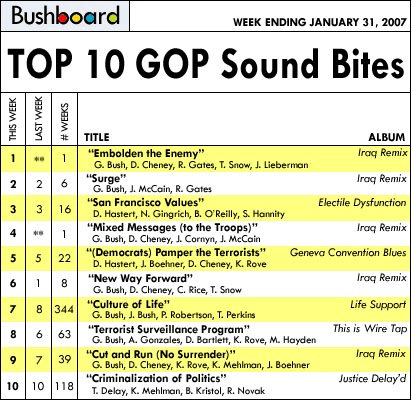 The President's hard-charging counterattack has moved two right-wing talking points up the charts. The new #1 is the thrashing "Embolden the Enemy," performed by George Bush, Dick Cheney, Robert Gates and Tony Snow, with guest vocals from Joe Lieberman. Jumping all the way to #4 is President Bush's haunting ballad, "Mixed Messages."
Meanwhile, some Republican golden oldies tumbled in this week's Bushboard chart. With the changing fortunes of the illegal NSA domestic surveillance program, "No Civil Liberties (When You're Dead)" by the Senate trio of Pat Roberts, John Cornyn and Jeff Sessions dropped off the charts. "Terrorist Surveillance Program, another smash hit from the White House's double-platinum This is Wiretap release, slid to #8.
Past Top 10 GOP Sound Bites charts are available here.