The Bushboard list of Top 10 GOP Sound Bites has seen another week of movement at the top of the charts. The Iraq war funding debate, the PurgeGate implosion of Attorney General Alberto Gonzales and last week's landscape-changing Supreme Court decision combined to produce a new crop of omnipresent Republican talking points. 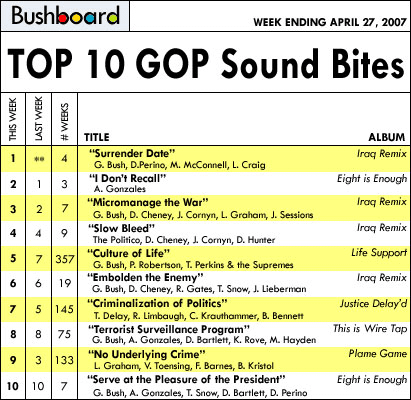 Rocketing to #1 is "Surrender Date." That haunting ballad from George Bush, Dana Perino and Mitch McConnell is just the latest smash hit from the GOP's double-platinum Iraq Remix LP. "Micromanage the War" and "Slow Bleed" held firm at number three and four, respectively. Holding firm at #2 is Alberto Gonzales' poignantly pathetic solo effort, "I Don't Recall" from his Eight is Enough release. And with the ruling in the so-called partial birth abortion case, the classic "Culture of Life" returned to #5 in the rankings.
For previous lists of the Top 10 GOP Sound Bites, visit here.