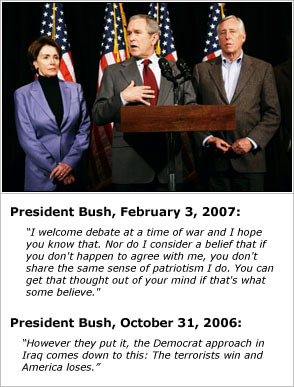 A chastened President Bush ventured into enemy territory on Saturday to address the annual gathering of House Democrats. Obliterated in the November elections and facing both abysmal poll numbers and open rebellion over Iraq within his own party, the formerly fierce Bush with tail between his legs feigned a spirit of bipartisan cooperation:

"I welcome debate at a time of war and I hope you know that. Nor do I consider a belief that if you don't happen to agree with me, you don't share the same sense of patriotism I do. You can get that thought out of your mind if that's what some believe."

As it turns out, that is exactly what President Bush, his Republican Party and its amen corner appear to believe.
It was President Bush, after all, who lashed out at Democrats in the run-up to the mid-term elections, declaring them virtual traitors on October 31, 2006:

"However they put it, the Democrat approach in Iraq comes down to this: The terrorists win and America loses."

President Bush, of course, has had plenty of company among the leading lights of the Republican Party in questioning the patriotism of the Democratic opposition. In 2004, Vice President Dick Cheney described the significance of a John Kerry victory, "if we make the wrong choice then the danger is that we'll get hit again." And just the day before President Bush's faux olive branch, White House press secretary Tony Snow got in the act. Snow, who had once branded now Democratic House Speaker Nancy Pelosi and Senate Majority Leader Harry Reid "wheezy prophets of the Defeatocrat Party," tried to tar the Democrats with the traitors' brush:

"As you know, and I've said many times, Osama bin Laden thought the lack of American resolve was a key reason why he could inspire people to come after us on September 11th. I am not accusing members of the Senate of inviting carnage on the United States of America. I'm simply saying, you think about what impact it may have."

The President's now emasculated allies in Congress are among the most notorious - and frequent - violators of Bush's supposed call for bipartisanship on national security matters. In the wake of the debate over the Military Commissions Act and its gutting of habeas corpus rights, then House Speaker Dennis Hastert attacked the Democrats who would "would gingerly pamper the terrorists who plan to destroy innocent Americans' lives," adding, "surprise that the Democrats in the House put their liberal agenda ahead of the security of America." Hastert was joined by the mercifully former House Majority Leader John Boehner (R-OH), who pronounced:

"The Democrats' partisan opposition to this program, at the urging of the radical leftist element of their Party, provides further proof that they continue to put politics ahead of addressing the security concerns of the American people...it underscores why the American people don't trust Democrats when it comes to national and homeland security."

In the 2006 elections, of course, the American people proved Boehner and his fellow GOP attack dogs wrong. The Republicans were overwhelmingly defeated and lost both their House and Senate majorities. By late January, a majority of American disapproved of President Bush's handling of terrorism, opposed his planned troop increases in Iraq and overwhelmingly preferred Democratic Congressional leadership in addressing Bush's Iraq debacle.
Addressing the new Democratic House majority on Saturday, a two-faced President Bush disingenuously claimed he sought to make peace with his Capitol Hill foes:

"I really hope that the members out there get a sense that I bear no ill will, I bring no animosity about the fact that we may not agree on every position, and that I am appreciative of the contributions they make."

We know he was lying, as the expression goes, because his lips were moving.