Visiting Israel, Sarah Palin Has a Jewish Problem at Home 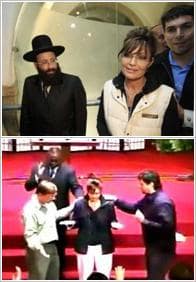 With her visit to Israel, Sarah Palin is going for a Republican twofer. Hoping to burnish her non-existent foreign policy credentials, Palin is simultaneously making what after going to Iowa and New Hampshire may be the most important pilgrimage for any aspiring GOP White House hopeful. But while her trip may win her some new friends among the Likud crowd, back in the U.S. Sarah Palin remains wildly unpopular among Jewish voters.
Following the recent steps of once-and-possibly future GOP presidential candidates Mitt Romney, Mike Huckabee, Rudy Giuliani and Haley Barbour, Palin said, "It's overwhelming to be able to see and touch the cornerstone of our faith." Swapping out her cross for a Star of David, the half-term Governor also did a copy and paste on her "we have nothing to apologize for" talking point. As the Jerusalem Post recounted:

World Likud chairman and Likud MK Danny Danon and Western Wall Rabbi Shmuel Rabinowitz served as Palin's tour guides on Sunday night. Palin was told that Jews were not allowed to pray openly on the Temple Mount and about the Arab riots that accompanied Netanyahu's decision to authorize the creation of an exit from the Western Wall tunnels in 1996.
"Why are you apologizing all the time?" Palin asked her guides.

But given her dismal standing among American Jews, it's Sarah Palin who might want to do some apologizing.
Palin's rejection by Jewish voters began long before she has the chutzpah to misappropriate the term "blood libel" in the wake of the Gabrielle Giffords' shooting. In the run-up to the 2008 election, Newsweek reported that "Palin may hurt McCain among Jewish voters." The dynamics in Florida, later carried by Barack Obama, were particularly telling:

Many Florida Jews who had previously been open to McCain appear to share the couple's aversion to Palin, according to political scientists, polling data and anecdotal reporting. "She stands for all the wrong things in the eyes of the Jewish community," says Kenneth Wald, a professor at the University of Florida. Among the examples he cites: Palin seems to disdain intellectualism, she's a vociferous opponent of gun control and she attended a fundamentalist church that hosted Jews for Jesus, which seeks to convert Jews to Christianity. (Palin apparently sat through a speech by a leader of the group in which he said terrorist attacks on Israel were punishment for Israelis' failure to accept Jesus as the Messiah.)

Despite polling which suggested Obama lagging among Jewish voters traditionally loyal to Democrats, the Illinois Senator ultimately maintained his party's hold on its vital constituency. Despite the fear-mongering of the McCain campaign and state GOP operatives, Obama dominated among Jews by 78% to 21%. By way of comparison, John Kerry (74% to 25% for Bush) and Al Gore (80% to 17%) scored about the same as Barack Hussein Obama with American Jews. As Newsweek concluded:

"There's no question that Obama came into this election with probably less going for him than most Democratic nominees," says Wald. But the Palin pick "probably blunted any gains the Republicans had made."

In an article titled, "I Find Her Offensive," Salon echoed that finding. "John McCain was making a bid for South Florida's Jewish voters, a crucial demographic in a purple state," Tristram Korten wrote, "But then he chose Sarah Palin as a running mate."
Her standing among Jewish voters didn't improve after the 2008 election. Joining the long list of Republicans who see Israel as a biblically mandated stepping-stone to the End Times conversion (and much larger slaughter) of the Jews, Palin used the launch of her memoir Going Rogue to make the case.
Pushing her book in November 2009, Sarah Palin not only went rogue on 40 years of American foreign policy, but raised suspicions that she believes the Apocalypse is nigh.

"I disagree with the Obama administration on that. I believe that the Jewish settlements should be allowed to be expanded upon, because that population of Israel is, is going to grow. More and more Jewish people will be flocking to Israel in the days and weeks and months ahead. And I don't think that the Obama administration has any right to tell Israel that the Jewish settlements cannot expand."

As Jeffrey Goldberg reported in The Atlantic, while Palin "holds fairly typical Protestant Zionist beliefs, and one of those beliefs is the regathering of the Jews in Israel," the minister of the Assembly of God church she frequented believed that "based on some personal revelation he claims to have gotten from God, that the Jews would move to Alaska during the Tribulation."
And as the Daily Beast suggested, it is those GOP primary voters who hold those "fairly typical Protestant Zionist beliefs" that Palin is targeting with swing through the Holy Land:

So what draws Palin and others to Israel, including Mike Huckabee and Haley Barbour last month, and Mitt Romney in January? For one thing, a chance to curry favor with a much larger constituency that follows the events in Israel no less fervently than Jews: Christian evangelicals. The evangelical community in America numbers tens of millions and votes overwhelmingly Republican. One of its arms, a John Hagee group called Christians United for Israel (also known by its acronym CUFI), now claims to be the biggest pro-Israel organization in America, larger even than AIPAC.

(Among those sharing at least some of her End Times views is evangelical minister and Samaritan's Purse president Franklin Graham. Graham, who served as Palin's tour guide during her recent trip to earthquake-ravaged Haiti, dealt another blow to Palin's credibility when he declared last week that earthquake-ravaged Japan could be a signal of the Second Coming.)
By booking her Israel trip through a Christian tour operator and not coordinating with the Republican Jewish Coalition, David Frum suggests Palin may have alienated her few Jewish supporters back home. Regardless, well before Palin's journey to Jerusalem, many Jewish Americans doubtless worried that her praise for her "Prayer Warriors" and call to "to start seeking some divine intervention again in this country" wasn't kosher. When it comes to Sarah Palin, their response to Israelis and Americans alike is a simple one.
Pls refudiate.

One comment on “Visiting Israel, Sarah Palin Has a Jewish Problem at Home”