Black Friday is the single biggest shopping day of the year. And this Friday, all eyes will be on Walmart, the nation's single biggest retailer and employer. But while the planned protests at 1,000 of the chain's 4,000 locations will keep the focus on Walmart's below-industry standard pay to its 1.3 million associates, the company's owners are actively working to reduce their tax bill as well.
That's the word from the New York Times, which on Monday reported that Walmart will move up its quarterly dividend payment by six days. Why?

The Walton family, which founded Wal-Mart, could save as much as $180 million in federal income taxes after the huge retailer announced Monday that it would pay out its quarterly dividend on Dec. 27 instead of Jan. 2, as was scheduled.
The change will allow the family and other Wal-Mart shareholders to record the income this year, when the federal tax rate on dividends tops out at 15 percent. Next year, if the Obama administration and Republicans are unable to reach a compromise, that rate is set to jump sharply to 39.6 percent. High earners will have to pay an additional 3.8 percent on most investment income to help pay for the new federal health care law, bringing the total possible tax bite to 43.4 percent.

Now, Walmart is not the only company taking steps to avoid the higher capital gains and dividend tax rates advocated by President Obama. But in Walmart's case, the Times pointed out, "the Waltons own 48 percent of Wal-Mart's stock, or 1.6 billion shares, and control three of the company's 16 board seats." As it turns out, the heirs of Walmart founders Sam and James "Bud" Walton now possess combined wealth equivalent to 49 million American families, 42 percent of the total.
As labor economist Sylvia Allegretto of the University of California and Josh Bivens of the Economic Policy Institute documented this week, the Fed's Survey of Consumer Finances (SCF) showed that the crippling recession which began five years ago has been a bonanza for the Walton Six. Between 2007 and 2010, the wealth of the Walton family members jumped from $73.3 billion to $89.5 billion even as median family wealth fell by 38.8 percent. The result?

It's no wonder Walmart chief financial officer Tom Schoewe told Wall Street analysts in the fall of 2007, "Tough times are actually a good time for Walmart."
Good for Walmart, that is, but not good enough for the Walton family. Because while Alice, Jim and Dobson Walton recused themselves from the recent dividend vote, they've been trying for years to eliminate the estate tax-and with it, their heirs' future multi-billion payment to Uncle Sam. 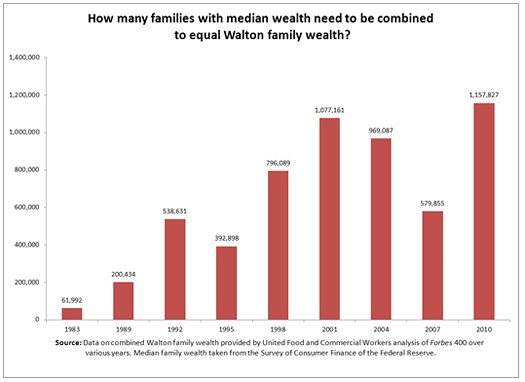 In 1999, that tax was 55% on an individual's estate valued at over $675.000. Thanks to President Obama's capitulation to Congressional Republicans in December 2010, the estate tax dropped to 35 percent starting at $5 million per person. (Despite the fact that only 0.25 percent of estates even had to pay the tax in 2009, Democrat Blanche Lincoln, also once known as the "Senator from Walmart," colluded with Arizona Republican Jon Kyl to force the lower rate.) President Obama has proposed returning the estate tax to its 2009 level of 45 percent starting at $3.5 million, a move which over the next decade would generate $119 billion for the United States Treasury.
But the Waltons, like other of Mitt Romney's billionaire backers, have another rate in mind: zero.
As Forbes first highlighted last year, between them the six Waltons combined have over $90 billion. As Vermont Senator Bernie Sanders explained in his famous filibuster of December 2010, the elimination of the estate tax could potentially save the Walton family $32.7 billion. Had Mitt Romney become President, the Walmart heirs could have gotten back a return 81,750 times Alice and Jim's original $400,000 Super PAC investment.
But Romney's defeat hardly represents the end of the Walton crusade to abolish the estate tax. As USA Today summed it up in 2005, they've been at it for years:

Led by Sam Walton's only daughter, Alice, the family spent $3.2 million on lobbying, conservative causes and candidates for last year's federal elections. That's more than double what it spent in the previous two elections combined, public documents show.
The Waltons have joined a coterie of wealthy families trying to save fortunes through permanent repeal of the estate tax, government watchdogs say. The election of President Bush and more conservatives to Congress gave momentum to the long-fought effort. The Waltons add more.

If the Waltons and their Republican allies succeed in blocking Obama's proposed changes for the capital gains tax rate (returning to 20 percent from the current 15 percent), the dividend tax rate (which would be the same rate as ordinary income) and increased estate tax rate, the U.S, Treasury would lose an estimated $361 billion over the next decade. That deep hole will have to be filled by all other U.S. taxpayers, also known Walmart customers and workers.
Put another way, it's the high cost of low prices--and low taxes.