For weeks, rumors have been swirling that Israeli Prime Minister Benjamin Netanyahu is pushing his cabinet towards a pre-emptive strike against Iran's nuclear facilities. In the U.S., such a move enjoys the backing not only of the usual neoconservative suspects, but virtually all of the Republican presidential candidates. But while would-be GOP President Mitt Romney declared, "I don't seek to take actions independent of what our allies think is best," the Israelis may not reciprocate. Unfortunately, as the Chairman of the Joint Chiefs explained, the United States can't count on Israel to warn Washington in advance of an attack on Iran. 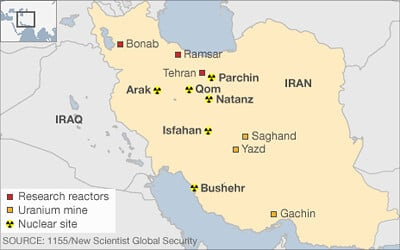 That's the word from General Martin Dempsey. The Joint Chiefs Chairman told Reuters that he didn't know whether Israel would give Washington advance warning of attacks aimed at disabling Tehran's nuclear capacity:

He said the United States was convinced that sanctions and diplomatic pressure was the right path to take on Iran, along with "the stated intent not to take any options off the table" - language that leaves open the possibility of future military action.
"I'm not sure the Israelis share our assessment of that. And because they don't and because to them this is an existential threat, I think probably that it's fair to say that our expectations are different right now," Dempsey said in an interview as he flew to Washington from London.
Asked whether he was talking about the differences between Israeli and U.S. expectations over sanctions, or differences in perspective about the future course of events, Dempsey said: "All of the above." He did not elaborate.

The matter has assumed greater urgency in the wake of new IAEA assessments of Iran's progress towards building nuclear weapons. But as the Telegraph first reported three weeks ago, the Netanyahu government has apparently refused to give the Obama assurances it will first notify the U.S. of its intentions. In an October meeting with Netanyahu and Defense Minister Ehud Barak, American Defense Secretary Leon Panetta came away empty handed:

Once all but a handful of trusted staff had left the room, Mr Panetta conveyed an urgent message from Barack Obama. The president, Mr Panetta said, wanted an unshakable guarantee that Israel would not carry out a unilateral military strike against Iran's nuclear installations without first seeking Washington's clearance.
The two Israelis were notably evasive in their response, according to sources both in Israel and the United States.
"They did not suggest that military action was being planned or was imminent, but neither did they give any assurances that Israel would first seek Washington's permission, or even inform the White House in advance that a mission was underway," one said.

The stakes for the United States could not be greater. Just two weeks ago, Panetta warned that "To go beyond (sanctions and diplomacy) raises our concerns about the unintended consequences that could result. ... There are going to be economic consequences to that, that could impact not just on our economy but the world economy." A majority of "national security insiders" surveyed by National Journal argued that no military strike should be carried out. Only 5 percent backed military action by Israel alone; none supported unilateral American strikes against Tehran.

Their fears are well-founded. As Panetta and other analysts have cautioned, strikes at Iran's well-protected nuclear installations might only delay Tehran's program by a couple of years. And unlike the Israeli destruction of the Iraqi reactor at Osirak in 1981, retaliation by Iran is almost certain. While shipping in the Straits of Hormuz could be threatened, Iran could strike at Israel, U.S. targets in the region and even Turkey. Tehran might not rain missiles on Israel, but its Hezbollah proxy in Lebanon almost surely would.
Those worries extend to Israel as well. In July, former Mossad chief Meir Dagan described the possibility a future Israeli Air Force attack on Iranian nuclear facilities as "the stupidest thing I have ever heard":

When asked about what would happen in the aftermath of an Israeli attack Dagan said that: "It will be followed by a war with Iran. It is the kind of thing where we know how it starts, but not how it will end."
The Iranians have the capability to fire rockets at Israel for a period of months, and Hizbollah could fire tens of thousands of grad rockets and hundreds of long-range missiles, he said.
At the same time, Tehran can activate Hamas, and there is also a danger that Syria will join the war, Dagan added.

Another former Mossad leader, Ephraim Halevy, declared last month that "An attack on Iran could affect not only Israel, but the entire region for 100 years." And as ThinkProgress reported, "twelve of the eighteen living former heads of the three Israeli security branches are actively opposing or have spoken out against Netanyahu's aggressive gestures toward Iran."
Nevertheless, Israeli President Shimon Peres warned that "The possibility of a military attack against Iran is now closer to being applied than the application of a diplomatic option." Hardliners including Foreign Minister Avigdor Lieberman have pushed back again Dagan. For his part, Defense Minister Barak announced last month that while "we don't want a war," he added two weeks later that "the IAEA report has a sobering impact on many in the world, leaders as well as the publics, and people understand that the time has come."
Back in the U.S., Republican leaders are anxious for action. GOP frontrunners Newt Gingrich and Mitt Romney both called U.S. strikes to prevent Iran from acquiring nuclear weapons. While Romney boasted "I won't let Iran get nukes," Gingrich explained is preferences:

While neither President Bush nor President Obama greenlighted an Israeli attack on Iran, Senator Saxby Chambliss (R-GA) declared in November that there's nothing the U.S. can do to stop it anyway:

"If Iran keeps moving down the road they're moving on now, Israel has every reason in the world to [be] concerned about the future of its country and people. ... I'm not sure there is anything the United States could do to stop Israel."

Maybe not. But at the very least, our close ally Israel, a recipient of $3 billion in annual U.S. aid and the beneficiary of the latest American weaponry, could let us know before it risks embroiling the United States in a greater Middle East into conflict.