As voters by now are hopefully aware, Mitt Romney has refused to name a single tax break he would end to help offset the $5 trillion, 10-year cost of his tax cut windfall for the wealthy. But the Republican has been very clear about which of the $1 trillion in annual tax deductions and loopholes he would preserve: his own. After all, Romney wants to maintain the "carried interest exemption" and the historically low capital gains tax (which Romney called "fair") which together helped him amass a fortune worth at least a quarter of billion dollars. Not content to rest there, Mitt wants to eliminate the estate tax, a move which on paper could save his heirs over $80 million (and those of his billionaire backers billions more).
But with his half-baked proposal to put a cap on the total dollar value of each American's individual tax deductions, Mitt Romney could actually cost himself some serious coin. After all, over the last two years (that is, the only ones we know about), Romney gave roughly $7 million (16 percent of his income) to charity (primarily to the Mormon Church). But under his proposed $17,000 cap on deductions, President Romney would potentially owe millions more to the United States Treasury.
As you'll recall, Governor Romney first floated the idea of the cap on the eve of the first presidential debate on October 3. Of course, that trial balloon was a misdirection, aimed at deflecting attention away both from his massive tax cut payday for the rich and his cowardly silence on which tax breaks he would end:

"As an option you could say everybody's going to get up to a $17,000 deduction; and you could use your charitable deduction, your home mortgage deduction, or others - your healthcare deduction. And you can fill that bucket, if you will, that $17,000 bucket that way. And higher income people might have a lower number."

Within 24 hours, Romney changed his plan yet again. Once-again side-stepping the question of which tax credits, deductions and loopholes he would end, Romney pulled a new figure out of the air during the October 3 debate:

If so, a large source of funding for America's hospitals, museums, institutions of higher education and even churches might disappear as well.
Currently, only about 30 percent of filers itemize their deductions, which in 2009 averaged over $26,000. But as Ezra Klein explained last week, "80 percent of tax savings from itemization goes to the top 20 percent of Americans households, and 25 percent of the savings goes to the 1 percent." In 2011, the Congressional Budget Office said those making over $500,000 a year gave 3.4 percent of their income to charity. (Individual contributions accounted for $227 billion of the $304 billion raised by charities in 2009.) Romney's proposed cap would have its greatest impact on upper-income, blue state residents, whose larger state and local tax bills and home mortgage interest payments currently provide the biggest sources of deductions. But charitable giving by the wealthiest Americans, like Mitt Romney's own $2.25 million deduction in 2011, could be slashed as well. 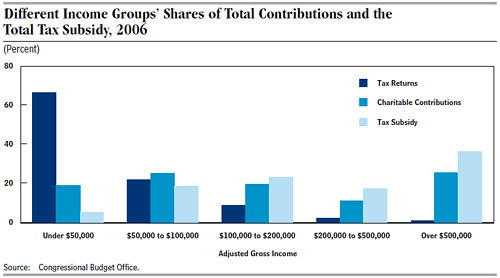 Jim Andreoni, a UC San Diego professor of economics who studies the economics of charitable giving, explained why:

"The effect on charitable giving is likely to be large for high income individuals, especially in the short run..."Some deductions are difficult to change, like mortgage interest or property taxes," says Andreoni. "Those will stay fixed for now, and for many high earners will more than use up the $17,000 cap on deductions. By contrast, charitable giving is about the only category of deduction that people can use in the short run to adjust for an increase in taxes. ... [E]ven though both your mortgage and your charitable giving are losing some tax benefits, only your giving can change in the short run to make up part of that loss.
So, high income donors will have two reasons to cut back on giving. First, they are losing after-tax income from deductions on things other than giving and that are hard to adjust, like mortgage interest. Second, giving itself will become far more expensive and is far easier to change than other deductions. It's intuitive to me that charitable giving will take a big hit from the cap on deductions."

Now, the Romneys' level of support for the Church of Jesus Christ of Latter Day Saints likely would not be affected much. And that's not just because the annual 10 percent tithe is mandated by the Church. As Mr. and Mrs. Romney explained to Parade magazine in August, Ann at least loves to do it:

ANN ROMNEY: I love tithing. When Mitt and I give that check, I actually cry.
MITT ROMNEY: So do I, but for a different reason.
ANN ROMNEY: I know this money is an indication of how much we trust God and love the principle of sacrifice. And it teaches us not to be too, too tied to the things of the world. And it is a very good reminder of how blessed we really are, and most of those blessings do not come from a financial source, but from the power above.
MITT ROMNEY: Our church doesn't publish how much people have given. This is done entirely privately. One of the downsides of releasing one's financial information is that this is now all public, but we had never intended our contributions to be known. It's a very personal thing between ourselves and our commitment to our God and to our church.

(Make that a personal thing between the Romneys and the IRS. As Bloomberg News explained Tuesday, Mitt has been trimming his tax bill for years using a "charitable remainder unitrust" set up for his tithing to the LDS, a device Congress has since limited.)
Mitt Romney may not want you to know precisely what he's giving to the Mormon Church, but he does want credit for how much. After all, his campaign has claimed Romney's charitable giving to his church is no different than paying taxes to the government of the United States. On January 25, Romney spun it this way to Jorge Ramos of Univision:

"Well, actually, I released two years of taxes and I think the average is almost 15 percent. And then also, on top of that, I gave another more 15 percent to charity. When you add it together with all of the taxes and the charity, particularly in the last year, I think it reaches almost 40 percent that I gave back to the community. One of the reasons why we have a lower tax rate on capital gains is because capital gains are also being taxed at the corporate level. So as businesses earn profits, that's taxed at 35 percent, then as they distribute those profits as dividends, that's taxed at 15 percent more. So, all total, the tax rate is really closer to 45 or 50 percent."

In August, Mitt announced that he never paid less than 13 percent in taxes (which ones he didn't say) over each of the last 10 years. Mitt insisted that get credit for the dollars donated to the LDS:

"Every year, I've paid at least 13 percent, and if you add, in addition, the amount that goes to charity, why the number gets well above 20 percent."

As it turned out, for his 2011 return Romney did not claim the full charitable tax break to which he was entitled (claiming only $2.25 million of the $4 million he donated) in order to keep his word about that 13 percent rate.
Of course, if he becomes President of the United States, Mitt Romney will have to get used to not getting a multi-million dollar deduction each year for his Mormon tithing. Unless, of course, he was never serious about his proposal to cap individual tax deductions in the first place.