WWTP: What Will Trump Pay Under the GOP Tax Bill? 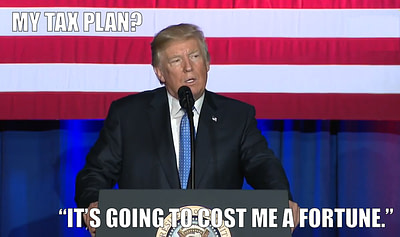 Donald Trump lost the 2016 presidential popular vote to Hillary Clinton by almost 3 million ballots. But by another seemingly meaningless measure, Trump got clobbered 38 to 0. That lopsided score represents the number of years of tax returns Democrat Clinton and Republican Trump respectively released to the American public.
But Trump's unprecedented opacity--for the past 40 years no major party presidential candidate had withheld his or her tax returns--is about to matter again. (Not that it ever stopped mattering; polls have consistently shown that Trump and his mouthpiece Kellyanne Conway are lying when they claim "people don't care.) That's because this week, the Trump administration and its GOP allies in Congress unveiled their "framework" for tax reform, a multi-trillion-dollar hemorrhage of red ink from the United States Treasury certain to stuff the bank accounts of the wealthiest people in the country. But at a time of record income inequality and GOP calls to slash domestic spending, the Trump tax plan isn't just horrible policy. Give the president's repeated pledges that his tax plan is "going to cost me a fortune," Trump's payday for plutocrats represents a broken promise, too.
That broken promise dates back to the early days of the Trump campaign. In September 2015, the real estate magnate introduced his first tax plan by declaring:

"It reduces or eliminates most of the deductions and loopholes available to special interests and to the very rich. In other words, it's going to cost me a fortune -- which is actually true -- while preserving charitable giving and mortgage interest deductions, very importantly." [Emphasis mine]

Almost two years later, the president on Sept. 13 guaranteed "the rich will not be gaining at all with this plan," adding, "We're looking for the middle class, and we're looking for jobs." And among those rich people, he assured the American people on Sept. 27, was one Donald J. Trump.

"No, I don't benefit. I think there's very little benefit for people of wealth."

Given his record-setting standard for lying to the American people, Donald Trump can only disprove his obvious self-dealing by releasing his tax returns. Decades of them. The message from taxpayers--to borrow from Ronald Reagan--must be: Don't trust, and verify.
Continue reading at Daily Kos.