Wyden Snatches Defeat from Jaws of Victory on Medicare 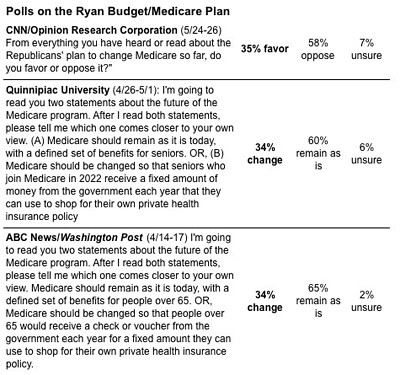 Earlier this year, 235 GOP House members and 40 Republican Senators voted for the Paul Ryan budget and its plan to ration Medicare. By ending the traditional government insurance program and leaving the elderly with under-funded vouchers to purchase much more expensive coverage from private insurers, Ryan's Republicans would dramatically shift the cost burden to America's seniors. It's no wonder that the incredibly unpopular scheme put Medicare at the center of the 2012 election for Democrats and President Obama.
But now Oregon Democratic Senator Ron Wyden is putting that all at risk. Combing bad politics with even worse public policy, Wyden has joined with Congressman Ryan to propose a "bipartisan" plan to convert Medicare into a premium support plan in which the traditionally lower-cost system is just one option in a menu with private insurers. The result doesn't merely threaten to undermine Medicare as we know it. With one stroke, Ron Wyden essentially endorsed Mitt Romney's Medicare plan and with it, is helping to get vulnerable Republicans off the hook.
The Ryan-Wyden proposal, or "Ryden" plan, if you will, looks a lot like the Medicare prescription from last year's Domenici/Rivlin blueprint. Unlike Ryan's previous attempt to end Medicare as we know, Ryden maintains traditional fee-for-service government insurance as one option. As the New York Times explained:

Congress would establish an insurance exchange for Medicare beneficiaries. Private plans would compete with the traditional Medicare program and would have to provide benefits of the same or greater value. The federal contribution in each region would be based on the cost of the second-cheapest option, whether that was a private plan or traditional Medicare.
In addition, the growth of Medicare would be capped. In general, spending would not be allowed to increase more than the growth of the economy, plus one percentage point -- a slower rate of increase than Medicare has historically experienced.

Which is just one reason why Democrats hate the new Wyden initiative. Rep. Jim McDermott (D-WA) told Bloomberg News, I don't know why Ron Wyden is giving cover" to Ryan. " "For starters, this is bad policy and a complete political loser," one Democratic aide said. "On top of the terrible politics, they even admit that it dismantles Medicare but achieves no budgetary savings while doing so -- the worst of all worlds." The Obama White House, too, is worried:

"We are concerned that Wyden-Ryan, like Congressman Ryan's earlier proposal, would undermine, rather than strengthen, Medicare," said White House Communications Director Dan Pfeiffer. "The Wyden-Ryan scheme could, over time, cause the traditional Medicare program to "wither on the vine" because it would raise premiums, forcing many seniors to leave traditional Medicare and join private plans. And it would shift costs from the government to seniors. At the end of the day, this plan would end Medicare as we know it for millions of seniors. Wyden-Ryan is the wrong way to reform Medicare."

Republicans, on the other hand, are overjoyed. The reliably Republican Wall Street Journal calls it a "breakthrough." Current GOP presidential frontrunner Newt Gingrich, who in the 1990's famously declared he wanted to see Medicare "wither on the vine," described the proposal as a "very important breakthrough." As for his rival Mitt Romney, the Washington Times rightly noted that "Romney's plan is virtually identically to what Wyden and Ryan outlined today." 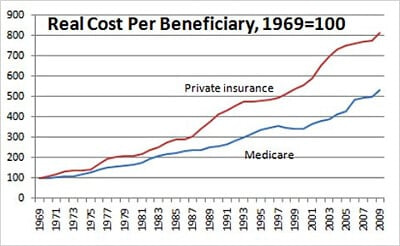 And that's not a good thing for the millions of Americans counting on Medicare to provide their health insurance in the future. While the nonpartisan CBO forecast that by 2030 beneficiaries would have to pay a stunning 68 percent of health costs under the original plan, the Romney and Gingrich proposals still make significant cost shifting to the elderly inevitable. While Ryden's private insurers could cherry-pick healthier (and wealthier) seniors, traditional Medicare would be left with sicker, higher-cost subscribers whose premiums would outgrow their voucher. As it turns out, since 1969 per beneficiary costs for Medicare haven't only risen 40 percent more slowly than private insurance. As Ezra Klein pointed out in June, history already provides a guide with the private Medicare Advantage option currently chosen by 15 percent of today's beneficiaries:

This isn't the first time we've tried to let private insurers into Medicare to work their magic. The Medicare Advantage program, which invited private insurers to offer managed-care options to Medicare beneficiaries, was expected to save money, but it ended up costing about 120 percent of what Medicare costs.

The only bright spot - and it's a small one -in Thursday's announcement by Ron Wyden and Paul Ryan is that their proposals in essence endorses the approach of the Affordable Care Act Republicans so loathe. As Ezra Klein explained, "Paul Ryan and Ron Wyden want to bring Obamacare to Medicare":

But the secret of these types of premium-support platforms is that they are, in essence, a vindication of the Affordable Care Act. The cost containment is supposed to come through competition between plans, and works like this: "All plans, including the traditional fee-for-service option, would participate in an annual competitive bidding process to determine the dollar amount of the federal contribution seniors would use to purchase the coverage that best serves their medical needs. The second-least expensive approved plan or fee-for-service Medicare, whichever is least expensive, would establish the benchmark that determines the coverage-support amount for the plan chosen by the senior. If a senior chose a costlier plan than the benchmark, he or she would be responsible for paying the difference. Conversely, if that senior chose a plan that cost less than the benchmark, he or she would be given a rebate for the difference."
In other words, the competition is driven by tying the subsidy to the second-least expensive plan in the market. That way, the system gives beneficiaries a financial incentive to choose the cheaper plan. That is exactly-- exactly! -- how the Affordable Care Act works. The difference here is that the system will include a massive public option in Medicare, which is something conservatives refused to allow in the Affordable Care Act.

For his part, Congressman Ryan now as in the past wants to keep his dirty secret, well , secret. On Thursday, Wyden explained, "What a lot of progressive folks have talked about is that in effect, traditional Medicare operates like a public option. Now, that's not very appealing, as you know, to conservatives." Ryan quickly responded, "Try not to use those words."
As for Wyden, he touted his alliance with Paul Ryan as a win for Democrats. He's pretty much alone on that score. Or as that very unhappy Democratic staffer put it: