10 Years After Bush's Worst Speech, GOP Offers Only Fear Itself 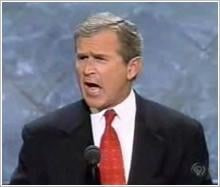 I've long felt that George W. Bush's acceptance speech at the 2000 Republican National Convention was among the most arrogant and reprehensible in the annals of American political oratory. But now that his party's overheated rhetoric on health care has helped foment threats and violence, Bush's address in retrospect was a masterpiece of projection as well. In claiming that the Al Gore's Party of Roosevelt "had their moment" and had nothing to offer but "fear itself," Bush could have been describing today's GOP.
On August 3, 2000, Governor George W. Bush mocked Vice President Gore to the delight of the jubilant crowd in Philadelphia. Using the ghost of FDR as a rhetorical club, Bush declared:

"He now leads the party of Franklin Delano Roosevelt, but the only thing he has to offer is fear itself."

Tens years later, could any description be more fitting of the Republican Party now?
Three years after the 9/11 attacks, Vice President Dick Cheney during the 2004 reelection campaign played the fear card in its purest form when he cautioned American voters, "If we make the wrong choice, then the danger is that we'll get hit again." As the dire warnings from Republican leaders this week confirmed, the GOP's descent into total bankruptcy is now complete.
Months after the likes of Sarah Palin, Chuck Grassley, Tom Coburn and Virginia Foxx invented the mythical "death panels" that would "pull the plug on grandma" and see seniors "put to death by their government," House Minority Leader John Boehner on Saturday said the following 24 hours would constitute "Armageddon" because the health care bill proposed by Democrats will "ruin our country." That same day, his Tennessee colleague Marsha Blackburn took to the House floor to bemoan "the death of freedom." And in a fire and brimstone sidewinder to the furious Tea Baggers gathered outside the Capitol, Texas Republican Louie Gohmert warned of the body count to come:

Gohmert told the crowd to "remember the Alamo" and that the only difference between that fight and the health care fight is that "if we lose this battle millions of Americans are going to die."

Today's Republican Party is also guilty of Bush's second indictment of the Clinton/Gore Democrats handed down a decade ago:

"For eight years the Clinton-Gore administration has coasted through prosperity. The path of least resistance is always downhill. But America's way is the rising road. This nation is daring and decent and ready for change...
America has a strong economy and a surplus. We have the public resources and the public will...But this administration, during eight years of increasing need, did nothing.
They had their moment. They have not led. We will."

Ten years later, after eight years of the Bush White House and GOP control of Congress until 2006, the process of Republican devolution into the Party of No is long since finished. And yet, on Tuesday former New York Mayor Rudy Giuliani insisted Republicans deserved another oportunity to address the health care crisis they ignored throughout Bush's tenure:

"You give us a chance. Let us do the things that we wanted to do that Obama completely stopped us from doing and Pelosi stopped us from doing. They keep accusing us of being the Party of No. Put us in power, give us a chance, and we will pass a major tax deduction for health insurance, $15,000 for an individual--for a family, $7,500 for an individual. We will pass the ability to buy insurance in every state, so you drive down the price of insurance. We will pass tort reform."

Sorry, Rudy. The Republicans, to quote George W. Bush, "had their chance. They have not led." And now, the Party of Lincoln offers us nothing but a house divided - and fear itself.

3 comments on “10 Years After Bush's Worst Speech, GOP Offers Only Fear Itself”