A Bad Week for Republican Neo-Confederates 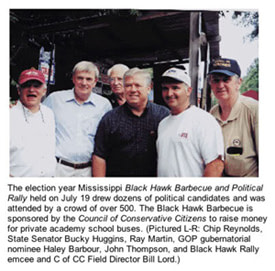 As the AP reported today, Republican presidential hopefuls starting on the road to the White House are finding the trip a bumpy one. But for two of the leading lights of the GOP, the past week was especially bad. Just days after singing the praises of the racist Council of Conservative Citizens, Mississippi Governor Haley Barbour had to explain his personal use of state aircraft. Meanwhile, neo-Confederate by choice George Allen found his path to political resurrection blocked by Virginia Tea Partiers who criticized him as not conservative enough.
As Politico reported, Governor Barbour repeatedly commandeered the state's 12-seat Cessna to mix "state business with both pleasure and national politics." The $500,000 tab does not include security costs or the salary differential which by Mississippi law must be given the lieutenant governor during his boss' out of state travel. And as it turns out, those missions included some not-so-urgent state business:

Some of Barbour's travel may well have been worth it to Mississippi, a state that is heavily dependent on federal funds. But much of the time, he has used the plane to go to fundraisers for himself and other Republican candidates and committees, to football games and to at least one boxing match -- travel that has a less obvious connection to what Barbour, a former top lobbyist in Washington, has cast as his lobbying on behalf of his state.

If Haley Barbour's antebellum nostalgia is the product of his background, George Allen's comes by choice. But like Barbour, Allen's 2010 ended on a sour note, indeed.
As the Wall Street Journal reported, Jamie Radtke, head of the Virginia Federation of Tea Party Patriots, has announced her candidacy to oppose Allen in seeking incumbent Democrat Jim Webb's Senate seat. And Radtke, as the Washington Post detailed, is just one indicator of Virginia Republicans' winter of discontent with George Allen:

For months, it appeared that former U.S. senator George Allen would have a clear path to the Republican nomination if he chose to try to reclaim his old job.
But in the summer, grumbling about his past began, culminating in a Web site outlining the reasons some fellow Republicans oppose him: He's too moderate. He's part of the establishment. He's partly to blame for the record spending and ballooning deficit in Washington.
By this month, no fewer than four Republicans billing themselves as more conservative than Allen were considering challenging him for the right to run against Sen. James Webb, if the Virginia Democrat seeks reelection.

Jo-Ann Chase, a conservative Republican from Loudoun County, complained, "I voted for him every time, but this time, no way," adding, "He's moderate. Maybe at the time he was the most conservative we had."
Perhaps, but where it mattered most to southern Republicans, the California transplant George Allen was whistling Dixie. 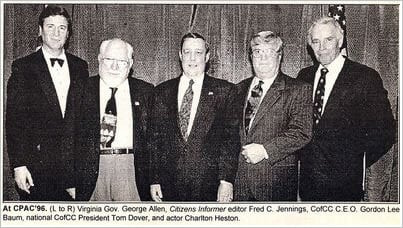 Long before the Macaca moment that killed his 2006 Senate reelection run and Governor Bob McDonnell's slavery-free celebration of secession, George Allen was a Confederate flag waving romantic with a deep fixation for the antebellum South throughout his public career:

Allen, who in 2005 co-sponsored a resolution apologizing for the Senate's past use of the filibuster against anti-lynching legislation in the 1920's, displayed a Confederate flag and a noose at his home. While governor of Virginia, Allen declared "Confederate Heritage Month" and branded the NAACP an "extremist group."

In April 2006, Ryan Lizza in the New Republic ("George Allen's Race Problem") provided a devastating portrait of Allen's love affair with Confederate symbols dating to his youth. Before Allen donned his cowboy boots as an "authentic" Virginia Senator, as a Southern California teenager he sported a Confederate flag lapel, "plastered the school with Confederate flags," and may well have painted racist graffiti. As Lizza detailed, Malibu George Allen became a Dixie lover by choice, suggesting some deep-seated need to express a rebellious identity at best or perhaps some much more profound social pathology at worst.
Among Allen's potential opponents is Delegate Robert Marshall. With unintended irony, Marshall summed up Allen's career in the Senate:

"People don't want Richmond to end up like Washington."

Whatever happens to their political fortunes, 2011 - the 150th anniversary of the start of the Civil War - is going to be a big year for Haley Barbour and George Allen. And to be sure, they will have plenty of company when they party like it's 1861.

One comment on “A Bad Week for Republican Neo-Confederates”