The United States Supreme Court this week announced it would soon hear a major case that could redefine the legal landscape at the critical juncture where abortion rights meet free speech. In National Institute of Life and Family Advocates v. Becerra, the plaintiffs are challenging a California statute regulating so-called "crisis pregnancy centers."
After concluding that the Golden State's 200 pregnancy resource centers used "intentionally deceptive advertising and counseling practices that often confuse, misinform, and even intimidate women from making fully-informed, time-sensitive decisions about critical health care," the New York Times reported, the legislature in Sacramento required these anti-abortion counseling services to post a notice letting clients know that "free or low cost abortion, contraception and prenatal care are available to low-income women through public programs, and to provide a phone number for more information." In addition, the California Reproductive Freedom, Accountability, Comprehensive Care, and Transparency Act (FACT Act) mandates that all unlicensed centers disclose their lack of accreditation from the state. And that, attorneys for 110 CPCs operated by the faith-based Christian ministry of National Institute of Life and Family Advocates argue, amounts to unconstitutional "compelled speech." 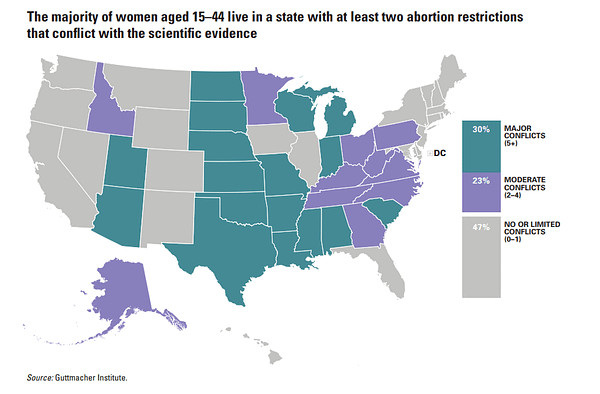 As it turns out, the claim that California law violates their First Amendment rights is more than a little ironic. After all, across the nation hundreds of new state abortion restrictions doubtless supported by the plaintiffs run roughshod over the freedom of speech by physicians and abortion clinics. That is, while California is mandating that crisis pregnancy centers simply tell women the truth about their services, GOP-led states are demanding that doctors lie to their patients about supposed "fetal pain," mythical "abortion regret," nonexistent side-effects, and so much more.
Continue reading at Daily Kos.