Only days after the Armstrong Williams paid-for-pundit debacle, President Bush used his January 12 "town hall meeting" to once again reach out to African-Americans. this time on his Social Security privatization plan.
With a hand-picked audience of supporters present on stage and in the Washington DC audience, Bush was on the top of his game:

"Another interesting idea...is a personal savings account...which can't be used to bet on the lottery, or a dice game, or the track.
"Secondly, the interesting -- there's a -- African American males die sooner than other males do, which means the system is inherently unfair to a certain group of people." 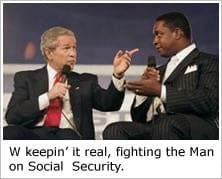 As with father Bush 41 before him, George W. Bush apparently cares about all American, even the "brown ones."

2 comments on “African-Americans and the Bush Social Security Plan”