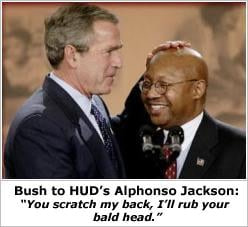 Among the least surprising political developments this week is the looming resignation of Bush Secretary of Housing and Urban Development Alphonso Jackson.
That news comes in the wake of calls from Democratic Senators Patty Murray (D-WA) and Chris Dodd (D-CT) for Jackson to step down over charges of cronyism in public housing deals in Philadelphia. But as I first detailed back in May 2006, Jackson was already in hot water for past admissions that political loyalty was an essential (and, of course, illegal) litmus test in how Jackson awarded contracts.

Alas, we won't have Alphonso Jackson to kick around anymore. He simply will fade into history as perhaps the least effectual of the incompetent, scandal-plagued bunglers like Michael Brown and Harriet Miers who came to define the Bush administration. But like Rick and Ilsa always had Paris in Casablanca, the American people will always have this image of George W. Bush and Alphonso Jackson.